News
Business
Movies
Sports
Cricket
Get Ahead
Money Tips
Shopping
Sign in  |  Create a Rediffmail account
Rediff.com  » News » 'Internet has been cut off': Cong to PM after Assam tweets

'Internet has been cut off': Cong to PM after Assam tweets

The Congress on Wednesday took a swipe at Prime Minister Narendra Modi over his assurance to the people of Assam on Twitter after the passage of the Citizenship (Amendment) Bill in Parliament, saying the people in the state cannot read his "reassuring" message as the internet there has been cut-off. 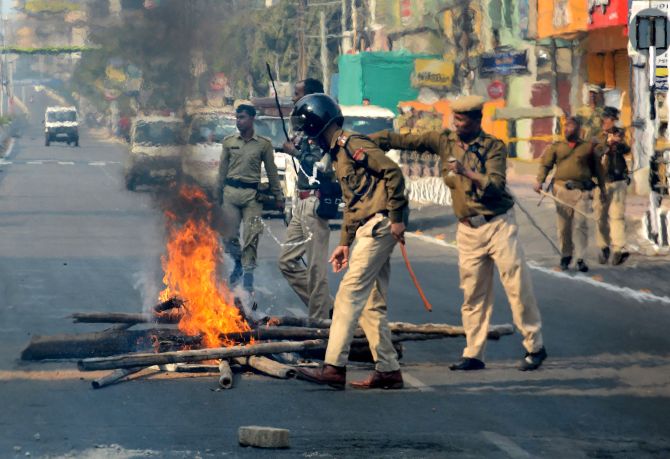 IMAGE: Security personnel remove burning logs that were allegedly set on fire by the protesters to block a road during an agitation against the Citizenship Amendment Bill in Guwahati. Photograph: PTI Photo

In a series of tweets, in both Assamese and English, the prime minister said he personally and the Central government are "totally committed to constitutionally safeguard the political, linguistic, cultural and land rights of the Assamese people as per the spirit of Clause 6."

"I want to assure my brothers and sisters of Assam that they have nothing to worry after the passing of #CAB," Modi tweeted.

Taking a dig at the prime minister's message, the Congress, from its official Twitter handle, said, "Our brothers and sisters in Assam cannot read your 'reassuring' message Modiji, in case you've forgotten, their internet has been cut off."

Several incidents of violence have been reported from the northeastern state following the passage of the bill in Parliament on Wednesday night. The law seeks to grant citizenship to non-Muslim refugees from Pakistan, Bangladesh and Afghanistan facing persecution there.

The government accused the Congress on Thursday of instigating violence in the northeast following the passage of the Citizenship (Amendment) Bill in Parliament, evoking sharp reaction from the opposition party.

Congress leader Adhir Ranjan Chowdhury raised the issue of violence in parts of the northeast region during the Zero Hour, saying barring a few places the entire region was in "flames".

"Internet services have been discontinued. We are witnessing that Kashmir phenomenon has been replicated in the northeast region," he said.

Chowdhury also said both these areas are of strategic importance and the government should take the deteriorating situation seriously.

Alleging that the Congress was instigating violence in the northeast region, parliamentary affairs minister Prahlad Jodhi said, "I condemn their attitude."

Following Joshi's remarks, Congress members along with that of Dravida Munnetra Kazhagam walked out of the House proceedings.

Later during the Zero Hour, Saugata Roy of the Trinamool Congress too raised the Assam and Tripura situation demanded a statement from the government on this.

The TMC MPs too walked out of the House in protest.