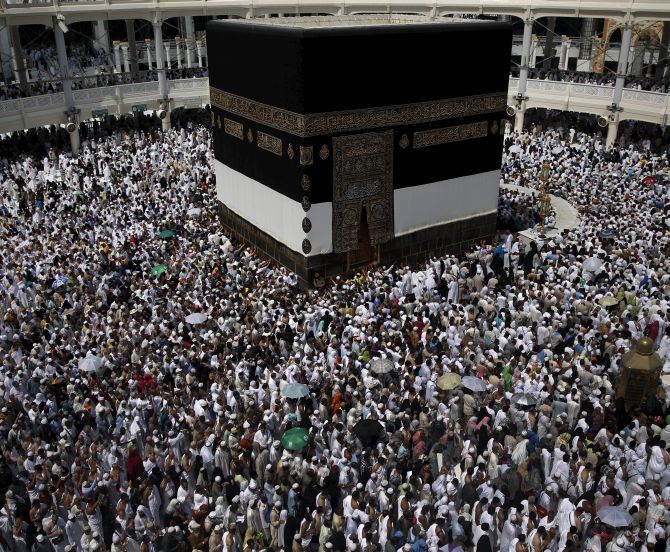 There will be no subsidy for Haj from this year and the funds saved will be used for providing education to minorities, Minority Affairs Minister Mukhtar Abbas Naqvi said on Tuesday, while projecting the move as an effort by the government to "empower minorities" without appeasement.

The minister also said a record number of 1.75 lakh Muslims will undertake the pilgrimage this year from India despite the subsidy withdrawal.

"There will be no subsidy on Haj now," he told reporters, adding that the government had spent over Rs 250 crore last year on subsidising the annual pilgrimage of Muslims to Saudi Arabia.

The decision is in line with a 2012 Supreme Court order, asking the government to do away with the subsidy, a long standing demand of the Bharatiya Janata Party.

Following the order, the subsidy was being gradually reduced every year.

"It is part of the Modi government's efforts to empower minorities with dignity and without appeasement," Naqvi said.

The funds would be utilised for providing education to minorities, he said.

Asked if the subsidy withdrawal will make the cost of the pilgrimage too high for many Muslims, Naqvi said the government was making efforts to bring it down.

The Saudi Arabian government has agreed to allow Indians to go on Haj by the sea route and officials of the two countries will work out the modalities, he said.

Naqvi said his ministry is also organising an event in Lucknow on January 18 in which he and Uttar Pradesh Chief Minister Yogi Adityanath will speak on "empowering minorities without appeasement" with the help of central schemes.

Minority affairs ministers of nine states will also attend the event, he added.

Reacting cautiously to the government's decision, the Congress said it hopes that the Modi government will honour the apex court's direction and utilise this money for the education and development of the disempowered among the minorities, including young girls.

The All India Muslim Personal Law Board said the government's decision on revoking Haj subsidy has no meaning as there was no such concession and Muslims were being cheated in its name.

All India Majlis-e-Ittehadul Muslimeen chief Asaduddin Owaisi said the subsidy had to be stopped, since it was a Supreme Court judgement.

"But it is important to see where the funds saved will be utilised. Will they increase allocation of funds for scholarships to Muslim girls.

"The verdict is around the corner. Let's see if government makes a separate allocation for funds to scholarships to Muslims, especially girls," he said.

Welcoming the Centre's decision, the Vishva Hindu Parishad said the money saved from it should be utilised for the education of poor Hindu girls.

The Left parties -- the Communist Party of India-Marxist and the CPI -- refrained from commenting on the development.

Various Muslim organsiations said that the move will have little effect on the pilgrimage as it was airlines that were benefiting from the subsidy.

It will not have much effect because the subsidy was meant for Air India and not for the pilgrims, said Jamiat Ulama-i-Hind president Kari Mohammad Usman.

All India Muslim Majlis-e-Mushawarat, a federation of Muslim outfits, said that the government should end all kinds of subsidies given for religious purposes.

AIMMM president Naved Hamid demanded that the government should float a global tender so that the Haj pilgrims could avail cost-effective travel.

According to sources in the minority affairs ministry, till 2017, the notional savings following gradual abolition of subsidy since 2012 was to tune of Rs 636.56 crore. In case, the government had chosen to reduce the subsidy gradually till 2022, the total national savings would have have been around Rs 5970.6 crore, the sources said.

Haj pilgrims from certain regions will have an additional option to choose from where they want to fly to Saudi Arabia for the annual pilgrimage, Naqvi said and claimed that this would bring down the cost by up to 70 per cent on some routes.

Haj aspirants -- for whom the 10 airports of Srinagar, Guwahati, Ranchi, Gaya, Indore, Bhopal, Mangaluru, Goa, Aurangabad and Varanasi are the nearest EPs -- will now get an additional economical option to fly from.

The pilgrims from Jammu and Kashmir, whose nearest EP is Srinagar, can opt to travel from Delhi now, helping them save on (per head) airfare. In 2017, the airfare for the pilgrimage from Srinagar was Rs 1,09,692 as against Rs 73,697 from Delhi.

The airfare for Haj 2018 may vary, ministry sources said.

Similarly, aspirants whose basic EPs are Guwahati, Ranchi and Gaya will have the alternative of undertaking the journey from Kolkata. Those having Indore, Bhopal, Goa and Aurangabad as the nearest airports, can opt for flying from Mumbai.

Those with Varanasi as the basic airport can choose Lucknow as their optional embarkation point while those with Mangaluru as their EP will have the option of Bengaluru.

Embarkation point once selected cannot be changed later on as tendering will be done accordingly, the sources said.

Naqvi also cited a host of measures, such as providing jobs and job opportunities to 8.5 lakh minority youth and scholarships to 1.83 crore students, to claim that the BJP-led NDA government has been working to empower minorities.

His ministry is entrusted with welfare measures for minorities that include Muslims, Sikhs, Christians, Zoroastrians (Parsis), Buddhists and Jains.

Naqvi, the lone Muslim cabinet minister in the government, also claimed that his ministry had succeeded in helping a lot of youths in getting employment by training them as GST facilitators.

Image: Muslim pilgrims pray around the holy Kaaba at the Grand Mosque ahead of the annual haj pilgrimage in Mecca. Photograph: Ahmad Masood/Reuters 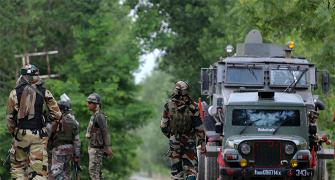 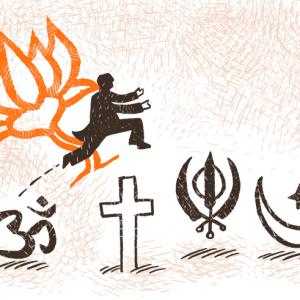