Defence Minister Manohar Parrikar on Thursday wondered why India cannot say "we are a responsible nuclear power and I will not use it irresponsibly" instead of affirming a "no first use policy", remarks he said were personal in nature. 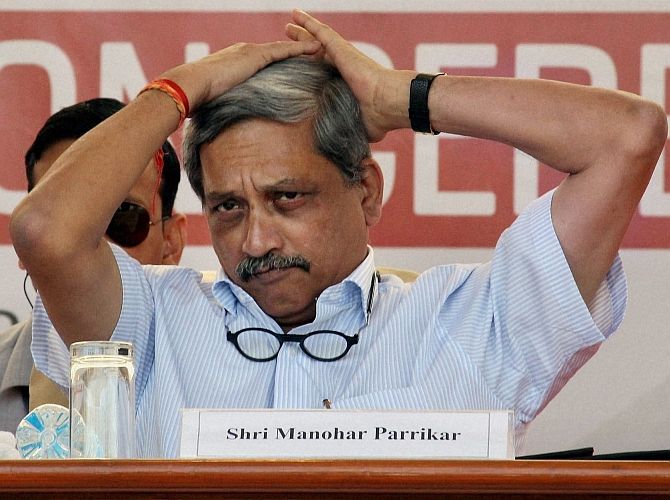 "Why should I bind myself? I should say I am a responsible nuclear power and I will not use it irresponsibly. This is my (personal) thinking," Parrikar said replying to a question as he explained the need to be unpredictable in warfare strategy.

Following the nuclear weapons test in 1998, India had declared a "no first use" nuclear policy.

Taking a dig at the media, he said they will publish that the nuclear policy has changed.

"It has not changed in government. It is my concept. As an individual I also get feeling. I am not saying you have to use it first. Hoax can be called off," he said, adding that prior to the surgical strike, Pakistan Defence Minister used to threaten India with the possible use of tactical nuclear weapons.

"From the day surgical strike happened, no threat has come. They realised that we can do something which is not well defined," he said.

Asked if this means that India is going to rethink its nuclear policy, the Minister replied in the negative.

"I am not at all saying about rethinking. What I am saying is that if I fix my doctrine... question was on nuclear, any aspect of my defence functioning, if I make it predictable, then I will lose the advantage of surprise. Unpredictability has to be built in your certain types of policy. You may decide for yourself, but don't spell it out," he said speaking at the launch of the book The New Arthashastra- A Security Strategy of India, edited by Brigadier Gurmeet Kanwal (Retd).

Repeatedly stressing that "it was my personal opinion", Parrikar said he feels that anything loses its importance if one predicts it.

"Basic logic of it, forget about nuclear or anything, basic knowledge of any security apparatus is, its weightage is defined by how I am going to use it. So in a security strategic programme, I am very clear that your strategy also needs to be be slightly kept unpredictable. Then only it carries weight," he said.

Parrikar also he said he often wonders why India does not have a written security doctrine.