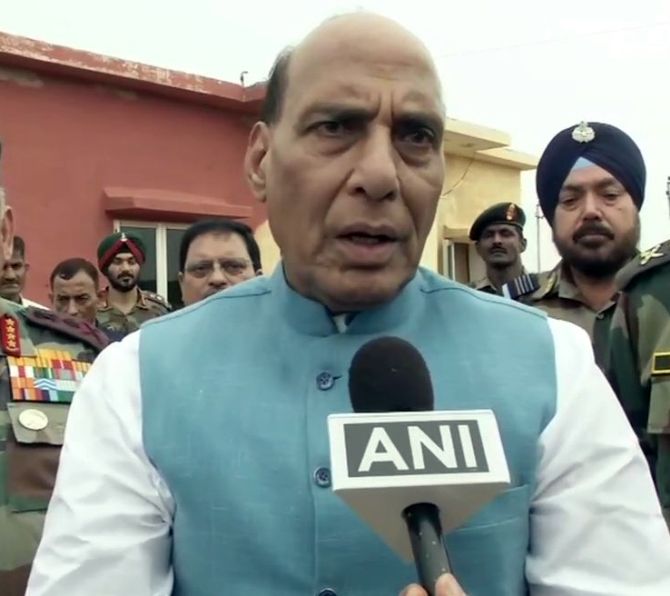 India is 'firmly committed' to its 'no first use' of nuclear weapons policy but future of the security doctrine will depend on the circumstances, Defence Minister Rajnath Singh said on Friday, in remarks which came in the midst of rising tension between New Delhi and Islamabad over Kashmir.

Singh made the comments after visiting Rajasthan's Pokhran -- the site of India's nuclear tests in 1974 during Indira Gandhi's regime and in 1998 when Atal Bihari Vajpayee was the prime minister.

'Pokhran is the area which witnessed Atal Ji's firm resolve to make India a nuclear power and yet remain firmly committed to the doctrine of 'No First Use'. India has strictly adhered to this doctrine. What happens in future depends on the circumstances,' Singh tweeted.

"India attaining the status of a responsible nuclear nation became a matter of national pride for every citizen of this country. The nation will remain indebted to the greatness of Atal Ji," he said.

WATCH: What happens in future depends on circumstances: Rajnath

As Singh's comments raised eyebrows, the Congress said the government should spell out its nuclear policy clearly and remove any ambiguity over it.

In November 2016, the then Defence Minister Manohar Parrikar too had expressed reservations over India's no first use doctrine on nuclear weapons.

The timing of Singh's comments assume significance as they came in the midst of heightened tension between India and Pakistan over Jammu and Kashmir.

Earlier this month, India abrogated Article 370 that gave special status to Jammu and Kashmir and split the state into two Union Territories.

Pakistan reacted sharply to India's decisions. Congress spokesperson Abhishek Singhvi said his party and the entire country will stand behind the government on the country's nuclear policy, but it needs to be spelt out clearly.

"If by this somewhat ambiguous statement, the defence minister either intends to keep us guessing or seeks to announce a change in policy, then the country would be happy to know what the new policy is. Not in ambiguous half phrases, but in a full one paragraph declared policy," Singhvi said.

"This is a very serious issue and it cannot be communicated in ambiguity. There is need for clarity on this and I urge the government to come out clearly," he added.