No end to struggle of migrant workers even after reaching home

They had left their homes for greener pastures in faraway Maharashtra, Gujarat, Delhi and Rajasthan. 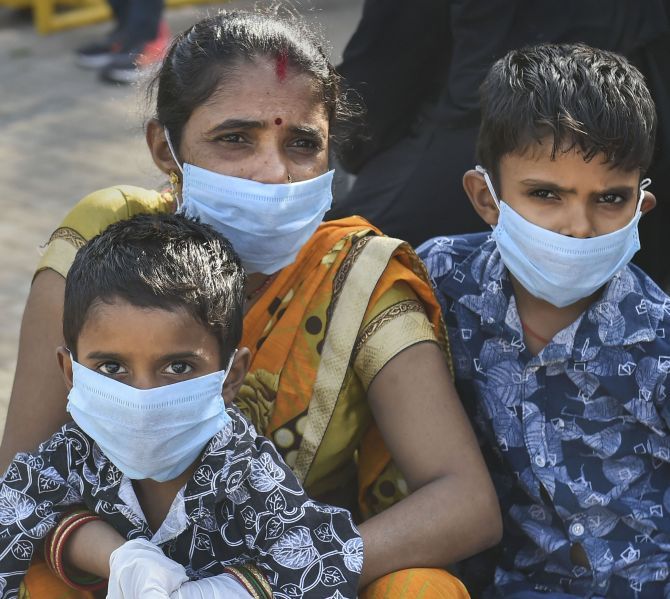 IMAGE: Migrants, wearing masks, wait to get medically screened before boarding a train for their native places in Bihar and UP, in New Delhi, on Monday. Photograph: Arun Sharma/PTI Photo

The corona-fuelled lockdown having shattered their dreams, they are now walking, cycling and hitchhiking hundreds of miles under an unforgiving sun blazing down at over 40 degrees to reach their homes in an impoverished Bihar, where an uncertain future awaits them.

Hungry and exhausted, these migrant workers are arriving at Sonathu and other villages in Bihar's Aurangabad district from places as far-off as Surat, Mumbai, Delhi, Jaipur and Chennai every day, carrying tales of trauma and tribulation.

But nobody comes to embrace them and all are curtly directed to forlorn government schools and other buildings that pass off as institutional quarantine centres that would be their home for the next 21 days.

Sonathu gram panchayat, with a population of around 10,000, has already received over 400 migrant workers, its head Poonam Devi told PTI over the phone.

The area, about 60 km from state capital Patna, was a Naxalite hotbed until a few years ago.

Every returnee has a story to tell about how they made it back to their village, says Poonam Devi.

"Coronavirus has forced people to walk through hell to reach heaven (home)," Moti Kumar, who hails from Dhamni village, said after returning from Chennai.

Kumar and 11 others -- a fellow villager and the rest from Banka district--commenced their daunting journey from Chennai on foot on May 13.

It took them nearly 11 days to reach home.

In the southern metropolis, the migrants from Bihar worked in a factory manufacturing rubber items for cars.

"Losing our jobs and left with no money to pay for room rent, we started walking towards Bihar. But police drove us back from the Tamil Nadu-Andhra Pradesh border.

"We were determined to reach home. So we sneaked our way through a forest and reached a national highway," Kumar, who is now in home quarantine, said.

Kumar's group hitched rides on trucks to reach Jharkhand, from where they again set out on foot, and finally reached their village.

His relative Gyanendra Kumar Singh said every day they see people trundling down the roads lugging suitcases and bundles clanking with utensils, betraying their migrant status.

Satyendra Kumar, an advocate and social worker based in Daudnagar in the district, said 16 young men recently pedalled over 1,000 km from Delhi to reach their homes.

At least 1,200 returnees have been housed in four quarantine centres in Daudnagar sub-division, he said.

Some worked in cloth mills in Gujarat, while others were engaged in carpet making in Jaipur. Those in Delhi worked as masons and also in cable manufacturing units, Kumar said.

All of them have managed to escape hunger and hopelessness in cities they had made their home.

These cities, bustling with commercial activity and throbbing with life, fed their dreams of a better future that their tiny, somnolent villages cannot offer.

Poonam Devi said jobs under MGNREGA and agricultural activity that are far less paying are their only options.

"While the returnees are still in quarantine centres, their families have started approaching us for jobs under MGNREGA," she said.

Satyendra Kumar said under the state government's instructions, MGNREGA job cards have been readied for 1,100 of the 1,200 returnees housed in the quarantine centres in Daudnagar.

Shafalta Singh, a college principal and resident of Dhamni village, said, "These are difficult times but our village has the culture of accommodating everybody."

Looking at the brighter side of the reverse exodus of the migrant labourers, Satyendra Kumar said it may end the migration of 'ropanniya' (seed planters) from Sitamarhi district in Bihar and Palamau and Latehar districts in Jharkhand to Aurangabad.

The 'ropanniya' outsiders take contract to plant paddy and get paid handsomely.

Like Aurangabad, lakhs of migrants have returned to the villages of Bihar and many more are set to arrive on 'Shramik Special' trains, while in a departure from the trend, over 2,200 migrants from Khagaria district have returned to work in Telangana.

The the exact number of migrants from Bihar working in other states is not yet known.

In the initial days of homeward migration, Deputy Chief Minister Sushil Kumar Modi had put the number at 27 lakh.

His estimate was based on the number of people who had received the state government's assistance of Rs 1,000 per head and others who applications were being processed.