No difference with govt on PoK, but on Article 370: Tharoor

Congress leader Shashi Tharoor on Thursday said that Pakistan has no right over Pakistan-occupied-Kashmir and it has given a territory to China which does not belong to it. 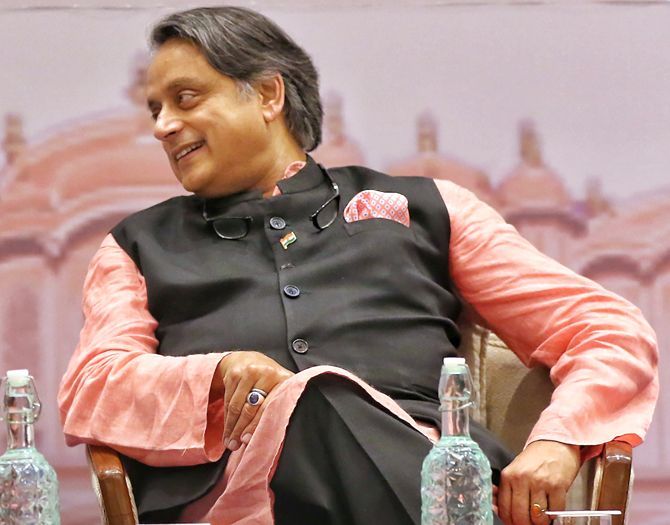 He said that he has no differences with the government's stand on the PoK, but the way it has dealt with the issue in Jammu and Kashmir by abrogating Article 370 is a violation of spirit of Constitution.

"I don't have any serious difference with the government's stand on the PoK but internally I differ with the government. They have violated spirit of the Constitution. Pakistan has no right on the PoK and they have given the territory to China which does not belong to them," Tharoor said during an event in Jaipur on Thursday.

He was the chief guest at the event -- 'India in Crisis' -- organised by the All India Professional Congress.

Tharoor said that mob lynching in the name of cow is maligning the image of the country on global platform.

"When I go abroad people say that people in India are being killed in the name of cow. The incidents of mob lynching in the name of cow have created an environment that investors are shying away from investing here," he said.

Talking about the Balakot airstrike, Tharoor said various international reports have said that no terrorist was killed in the Indian Air Force attack on a terror camp on February 26.

"Various international media have published pictures as a proof that no terrorist was killed in the Balakot air strikes. The proofs that they have is not available with our government. If the government says that the strikes were effective and terrorists were killed then they should have shown some proofs," Tharoor said.

He said that the whatever "we saw through international media reflects that nothing major happened but a message was sent that our airplanes entered into Pakistan's air space and hit a target".

"I believe that it was a big message and it was shown that we will not sit quiet and we will act...What I have said is that international mediums have created doubts over effectiveness of the airstrike," he said.

Rajasthan deputy chief minister Sachin Pilot, who was also present at the event, said that figures suggest that unemployment is the biggest problem in the country and concrete steps should be taken to balance the macro-economic environment

He said that there is slowdown in every sector today and investors' confidence has gone down, non-performing assets have gone up, banks are not giving loans, jobs are not being created, factories have shut down.