Curbs on internet in Kashmir will be lifted at appropriate time: Amit Shah

Home Minister Amit Shah on Wednesday said in Rajya Sabha that total normalcy prevails in Kashmir with government offices and educational institutions functioning fully, but Internet connection will be restored after the local administration feels it is fit to do so. 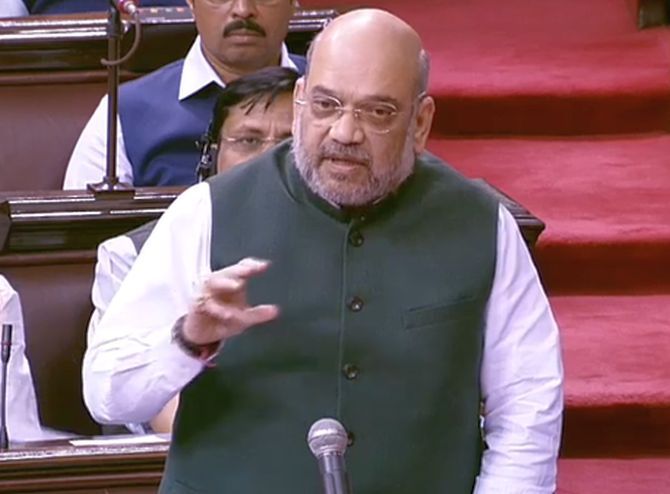 Prohibitory orders under Section 144 are prevalent only in certain areas from 8 pm to 6 am in the valley, he said.

Responding to a series of questions on the situation in Jammu and Kashmir during Question Hour, Shah said government offices, educational institutes, courts, health centres, banks and media outlets are functioning fully.

Internet is important in the present day world and it should be restored as early as possible. It is an effective means of communication, he said.

“However when it comes to the security of Jammu and Kashmir and for waging war against terrorism, we have to fix our priorities," he said.

The home minister recalled that it was the Bharatiya Janata Party government which began Internet service in Kashmir way back in 2002 and the mobile service in 2003.

To a supplementary on how much more time would be needed to bring normalcy in Kashmir, Shah said, “The situation there was always normal. There were many notions spread all over the world. There is total normalcy prevailing. After August 5, not a single person has died in police firing although many feared there would be bloodshed and more number of killings."

All restrictions imposed in Kashmir have been successful. Stone pelting incidents have come down to 544 so far in 2019 from 802 incidents in 2018, he said.

Highlighting the normal functioning of life in Kashmir, Shah said Urdu and English dailies and all TV channels are functioning and circulation of newspapers has increased.

Courts are also functioning fully. They have heard 36,192 cases and delivered orders in as many as 500 cases, he said, adding that even the Block Development Council elections were held peacefully and successfully.

Hospitals are also functioning and the number of people visiting the Out Patient Department has increased in Srinagar, he said, adding good quantity of medicines are being made available in the valley and there is no shortage.

Mobile vans and vending machines were also made available.

"If anyone has information that a particular person in a remote area is not getting medical facility, they can contact me directly. I will get it done in 24 hours," Shah told the House.

The sale of LPG, kerosene and rice has also gone up by 8-16 per cent in the last ten years, he added.

To protect apple growers, Shah said the government has made all arrangements for sale of the fruit.

Cooperative NAFED has so far procured about 6,000 tonnes of apples from Kashmir.

Apple production is estimated to be 22.58 lakh tonnes this year and the government is facilitating traders for sale of the fruit, he added.

As the home minister gave out figures supporting normalcy in the Valley, Leader of Opposition in the Upper House, Ghulam Nabi Azad said, "It looks like the Home Minister is referring to the report of some other state."

When Opposition members objected to the Chair giving more time to the home minister to reply on Kashmir during the Question Hour, Chairman Venkaiah Naidu said, "It is a national security issue".

The home minister said, "There can be a discussion on this matter for an hour."

The Opposition insisted that there should a debate on the matter, to which Naidu said, "It will be done".