No compromise on India's sovereignty: Shringla amid standoff

Amid the India-China border tension, Foreign Secretary Harsh Vardhan Shringla on Friday said there will be no compromise on India's sovereignty and territorial integrity, and asserted that it cannot be "business as usual" in bilateral ties unless there is peace and tranquility in the border areas. 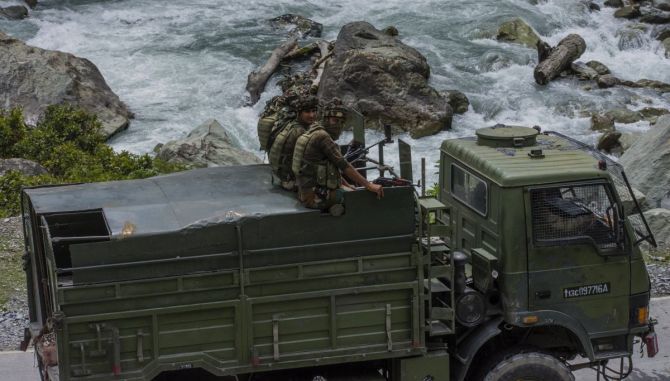 He also said it was important that even during the difficult moments of this "crisis" India has been communicating and engaging with China.

"The pandemic has not stopped us from engaging. We have used the digital means, we have used the telephone, we have used direct diplomatic contacts between New Delhi and Beijing and we have been talking to each other on this issue," he said at an Indian Council of World Affairs webinar.

"We remain firmly committed to making sure that we preserve our territorial integrity and our sovereignty and we will not yield on that ground, we will remain firm and resolute. At the same time, we are open to resolving outstanding issues through dialogue," the foreign secretary said.

On the challenges being faced by India amid the COVID-19 pandemic, he spoke about the situation along the Line of Actual Control in Ladakh.

The tension between the two sides had escalated manifold after the violent clashes in Galwan Valley in eastern Ladakh on June 15 in which 20 Indian Army personnel were killed.

In response to a question, Shringla said it was an "unprecedented" situation at the India-China border which had not been seen since 1962.

"We have also seen that there has been an attempt to take unilateral action that seems to be an effort to change facts on the ground. I have also said that we will be firm and resolute in resisting this. As far as we are concerned, there will be no compromise on our sovereignty and territorial integrity," he said.

At the same time, he said, as a responsible nation India is always willing to talk and engage.

However, he asserted that it cannot be "business as usual" unless there is peace and tranquility in "our border areas" and the normal bilateral relationship between India and China will be affected.

"There is a linkage between what is happening on the border and our larger relationship and that fact is very evident," Shringla said.

"As we seek to resolve these issues and as we seek to maintain and revert to the status quo that existed before such aggressive actions took place, as we seek to de-escalate and de-engage, I think that could be a way that we could go back to where we were (in the relationship), but not until then," he said.

Tensions had again flared up in the region after China unsuccessfully attempted to occupy Indian territory in the southern bank of Pangong lake five days back when the two sides were engaged in diplomatic and military talks to resolve the festering border row.

In that context, he mentioned India's initiative to engage with SAARC nations at the becoming of the pandemic and the establishment of a fund to fight the pandemic.

He, however, acknowledged the limitations of SAARC due to the fact that it needs consensus to move forward on cooperation.

"One of our neighbours has been consistently involved in blocking the South Asian Association for Regional Cooperation in all of its constructive activities," Shringla said in an apparent reference to Pakistan.

He lauded the BIMSTEC initiative which he said had emerged as an alternative mechanism.

Talking about issues that India has strongly taken up, he said the country has been advocating the need for greater global cooperation against terrorism.

"We are involved with resisting the threat of terrorism. We are directly a target of global and cross border terrorism," Shringla said.

"As a country that has faced terrorism, we are steadfast in seeking action against terrorism and its sponsors. While our efforts in this regard have found global support and resonance, we need to ensure that the world follows an undifferentiated and unambiguous approach to terrorism," he said.

On India opting out of Regional Comprehensive Economic Partnership, Shringla said it did not seem to be in India's national interest.

He also highlighted India's role as the "pharmacy of the world" during the pandemic period and the humanitarian aid provided by it to neighbours and beyond.