The Bharatiya Janata Party has been circulating letters of ex-Union agriculture minister Sharad Pawar randomly to "confuse" people after the Nationalist Congress Party declared support to farmers agitating against the Centres new farm laws, the NCP said on Monday. 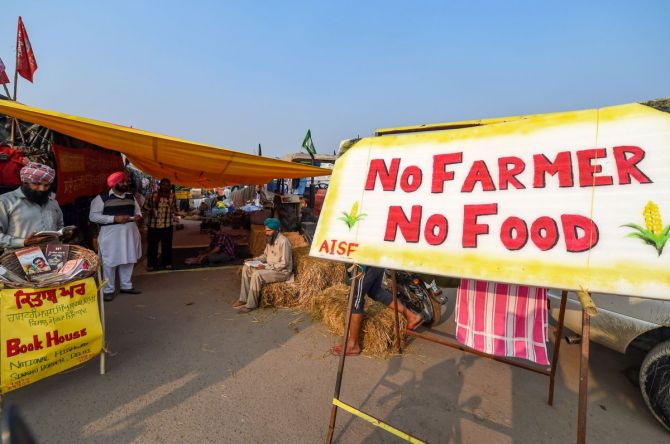 The letters by Pawar, who handled the key portfolio of agriculture during the Congress-led United Progressive Alliance government, have become a source of controversy with the BJP using them to attack the NCP president whose party has opposed the new farm laws and backed the ongoing agitation by farmers.

The NCP has come out in support of Pawar and said as the agriculture minister he persuaded many 'reluctant' states to implement the Atal Bihari Vajpayee government's model APMC Act.

Speaking to reporters in Mumbai, NCP spokesperson and Maharashtra minister Nawab Malik said Pawar, when he held the farm portfolio, took decisions with consensus and never imposed them on states.

On the other hand, the Modi government is working in a dictatorial manner and "imposing" farm laws on states, Malik charged.

After the NCP declared support (to farmers stir), the people of BJP have circulated some letters, claiming Pawar saheb himself was encouraging privatisation, he said.

"The people in the BJP feel that farmers somewhere can trouble the government. Hence, some random papers are being circulated to confuse the people," Malik said.

The Maharashtra minister said people always believed that the BJP is not a party of farmers, but of those who loot agriculture produce.

Malik reiterated that NCP workers will take part in Tuesdays 'Bharat Bandh' called by farmers bodies to oppose the three agriculture sector-related laws passed by Parliament a few months ago.

Earlier in the day, NCP spokesperson Mahesh Tapase said the model APMC Act, 2003, brought by the Vajpayee government did not find favour with many states who were reluctant to implement it at that point of time.

After assuming charge as the Union agriculture minister in 2004, Pawar tried to form a broader consensus amongst State Agriculture Marketing Boards by inviting suggestions for the implementation of the said Act, Tapase added.

Till date, farmers across the country are benefitting from the implementation of the said Act, which was fine-tuned by Sharad Pawar Saheb to protect the interest of the farmers of the country, Tapase added.

The NCP leader said the new farm laws introduced by the Modi government, however, have raised several doubts and insecurity in the minds of farmers regarding MSP and other issues which the NDA regime has failed to address, resulting in large-scale protests by cultivators.

The Modi government could not form a broader consensus and has failed to satisfy legitimate apprehensions of the farmers and entire opposition, Tapase added.

In Nagpur, senior NCP leader and former Union minister Praful Patel said his party had not supported the new farm laws in Parliament, adding they were introduced without discussions with anyone.

There is no clarity on the future of the APMC set-up or the minimum support price mechanism, nor on what farmers can do to get justice in case they face a loss and contracts are not honoured by traders and private companies, Patel told reporters.

Pawar is scheduled to meet President Ram Nath Kovind on December 9 over the ongoing farmers' protest against the new agri-marketing laws.

The NCP president on Sunday asked the Centre to take serious cognisance of the ongoing farmers' protest and said if the deadlock continues, the agitation will not be limited to Delhi and people from across the country will stand by the protesting farmers.

Central government sources on Sunday pointed out that as the Union agriculture minister Pawar had asked chief ministers to amend the APMC Act in their states to allow the private sector to play an important role in the field.

Sharing the content of some letters Pawar had written to various chief ministers, the sources had claimed that the BJP-led NDA government has made the same set of changes in the Agricultural Produce Marketing Committee Act as pushed by him when he was the Union minister.