The Centre on Friday pledged all support to cyclone Nivar-affected Tamil Nadu with both Prime Minister Narendra Modi and Chief Minister K Palniswami announcing relief to the kin of those killed. 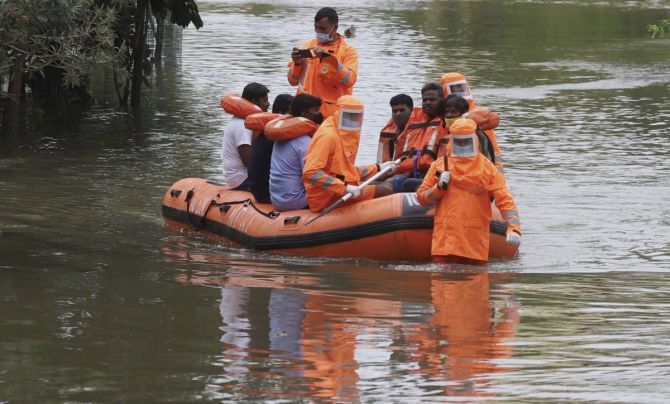 IMAGE: NDRF personnel carry out a rescue operation to move locals to safer places after the landfall of Cyclone Nivar, at Mudichur in Chennai. Photograph: PTI Photo

Nivar which wreaked havoc in 18 districts of the state has claimed four lives besides leaving several cattle dead and over 2,000 trees uprooted, Palaniswami said, a day after the very severe storm made landfall.

Modi spoke to Palaniswami who apprised him of the situation in the state.

The prime minister informed Central teams would be deputed the state for all assistance.

"Spoke to Tamil Nadu CM Thiru @EPSTamilNadu and discussed the situation in the wake of the cyclone and heavy rainfall in parts of the state. Central teams are being sent to Tamil Nadu to assist in rescue and relief work," a PMO tweet said.

In another tweet, it said the PM condoled the loss of lives and prayed for quick recovery of the injured.

"An ex-gratia of Rs 2 lakh each would be given to the next of kin of the persons deceased and Rs. 50,000 each to the injured, from the PMNRF. @CMOTamilNadu," it added.

Palaniswami announced Rs 10 lakh each to the families of the victims.

Apart from uprooting 2,064 trees in the affected districts, including Chennai, Cuddalore, Chengalpattu, Vellore and Nagapattinam, it caused damage to about 108 power transformers and over 2,927 electric poles, Palaniswami said in a statement.

The work to clear the fallen trees and restore the transformers was being taken up on a war-footing, he said.

"The state government swung into action immediately after receiving an alert about the cyclone from the Indian Meteorological Department. Strict measures were put in place to prevent casualties due to the cyclone."

"However, I am very saddened to learn that four persons have lost their lives due to the unexpected cyclone and heavy rain," he said.

Palaniswami expressed his deepest condolences to the victims' families and said he has ordered financial assistance of Rs 10 lakh each -- Rs four lakh from the State Disaster Relief Fund and Rs six lakh from the Chief Minister's Public Relief Fund.

Appropriate assistance would be provided to the people whose houses were damaged due to the cyclone, he said. Asserting that prompt measures averted a major catastrophe, Palaniswami said people living in low-lying areas were evacuated to safety and lodged in relief camps.

They were provided food, water, mats and blankets. In addition, each family was provided 10 kg rice, dhoti, saree, a liter of kerosene, lentils and cooking oil.

Steps were on to prevent the spread of infectious diseases by organising medical camps which so far benefitted about 85,331 people.

On the problem of inundation in the city and suburbs, Palaniswami said he has directed the authorities to formulate appropriate plans to find a permanent solution, especially in areas like Velachery, Mudichur, Varadarajapuram and Tambaram.

Compensation to farmers for crop loss would be provided after assessing the extent of damage.