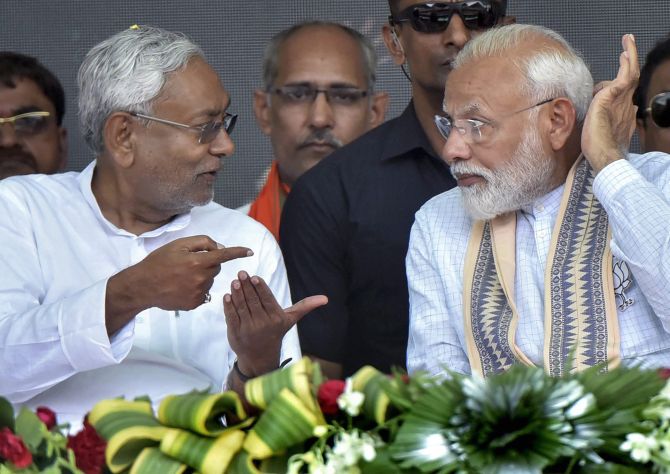 And that was evident at a recent rally of Prime Minister Narendra Modi when his Bihar ally chief minister Nitish Kumar remained seated while the former led his supporters in fervently chanting 'Bharat Mata Ki Jai" and "Vande Mataram".

The video of the rally at Darbhanga that has gone viral shows Modi and others standing and repeatedly raising the Bharatiya Janata Party's battle cry "Vande Mataram..." while thrusting their clenched fists into the air. Those following the lead included Lok Janashakti Party chief and Union minister Ram Vilas Paswan.

Nitish Kumar, whose party Janata Dal-United has made no bones about its differences with the Bharatiya Janata Party over contentious issues like Triple Talaq and abrogation of Article 370, stayed put in his seat with just a ghost of a smile crossing his face.

The footage aired by a few news channels left social media abuzz with speculations about the next move of the canny Bihar satrap who has made many a turnaround in the last about half decade.

A journalist tweeted the video footage with the remark "The curious case of Nitish Kumar. Once the challenger and now a follower", while another took the microblogging website to sarcastically say "The enthusiasm of Nitish Kumar is noteworthy".

Interestingly, Modi, while addressing the rally had castigated former Bihar minister and Rashtriya Janata Dal candidate for Darbhanga Abdul Bari Siddiqui for his statement that he could not recite the national song as it went against his monotheistic religious beliefs.

When asked about the JD-U president's gesture, party spokesman Rajiv Ranjan Prasad said his party was of the view that one's reverence for the country could be shown in many ways and, of course, chanting Vande Mataram and Bharat Mata ki Jai were among those.

"But ours is a diverse culture and we ought to respect each other's customs. People must not be coerced into exhibiting their patriotism in one particular way," he said.

Prasad recalled the sacrifices of Paramveer Chakra awardee Havildar Abdul Hamid in the 1965 war and India's victory over Pakistan in 1971, made possible by the military acumen of the likes of Field Marshal Sam Manekshaw and Lieutenant General Jagjit Singh Aurora.

"It has to be kept in mind that the country belongs to all and nobody should be forced to do or say anything against his or her wish to prove their loyalty to the nation," Prasad said.

Kumar has been a BJP ally for more than two decades, barring a four-year gap during which he explored alliances with the Communist Party of India and, following its failure, forged a coalition with RJD and the Congress which helped him reap a rich electoral harvest but was short-lived.

He, however, never tried to brush under the carpet his ideological differences with the saffron party.

Kumar kept Modi at a distance when the latter was still the chief minister of Gujarat in the wake of the 2002 communal riots and snapped ties with the BJP when it made him the chief of its election campaign committee ahead of the 2014 general election.

Back in the NDA in July 2017, Kumar's party came out with a dissenting note on issues like the Triple Talaq Ordinance and the Citizenship (Amendment) Bill.

Just a week before the election schedule was announced, the JD-U national executive adopted a resolution against abrogation of Article 370 which the BJP has promised in its manifesto. 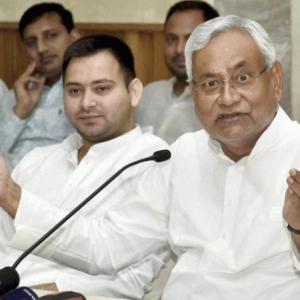 How long is Nitish assured of BJP's support? 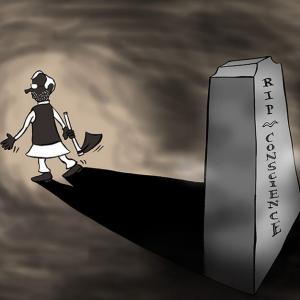