Janata Dal-United leader Mewalal Chaudhary, whose appointment as the education minister of Bihar despite a corruption taint had brought the Nitish Kumar government under heavy opposition fire, resigned on Thursday barely hours after taking charge. 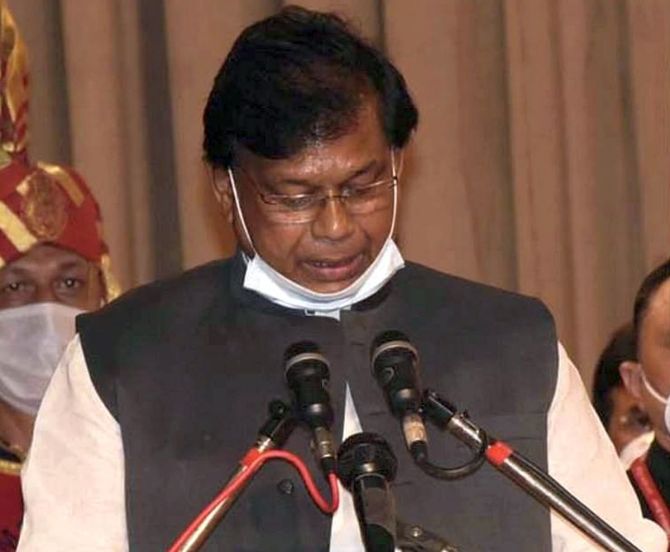 Soon after assuming charge, Chaudhary expressed dismay over the controversy and told journalists that he was neither convicted by a court nor named in any charge sheet filed by the investigating agency in connection with irregularities that allegedly took place at an agriculture university a few years ago while he was its vice chancellor.

His resignation was accepted by governor Phagu Chauhan on the recommendation of chief ninister Nitish Kumar, and Ashok Choudhary, who holds building construction and other portfolios, has been asked to take the additional charge "till further orders".

"I was nowhere directly involved in the appointments. As the VC, I was only the Chairman of the experts' committee which was entrusted with the recruitments. Moreover, no court of law has held me guilty nor has any charge sheet been filed against me," said Chaudhary, who is understood to have been summoned by the chief minister twice before he agreed to step down.

Chaudhary had been named in an FIR lodged in 2017 pertaining to alleged irregularities in appointment of assistant teachers and junior scientists at the Bihar Agriculture University in Bhagalpur district.

Known to be close to the JD-U boss, he was appointed as the VC when the varsity was established in 2010 and five years later, following expiry of his tenure, got elected from Tarapur assembly seat on a party ticket which he retained in the recently held elections.

Chaudhary was also asked about stinging criticism by former deputy chief minister Sushil Kumar Modi, who was then in the opposition and had strongly demanded action against the Tarapur MLA in connection with the corruption case.

"I think he was misled by some people," said Chaudhary about his mentor's trusted lieutenant Sushil Kumar Modi who has been replaced by two lesser known BJP leaders Tar Kishore Prasad and Renu Devi.

He expressed anguish over suspicions being raised in some quarters over the death of his wife Neeta who succumbed to injuries sustained in a gas cylinder explosion last year.

"I am going to send legal notices to those who are spreading canards against me. I will seek damages worth Rs 50 crore," he fumed.

Chaudhary's wife had represented Tarapur in 2010-15.

After he retained the seat for the second consecutive term, he was sworn in as a member of the cabinet on Monday and allocated the education portfolio a day later.

TV footage of Chaudhary's official residence showed hundreds of bouquets and sweet packets lying in the forecourt, with only a handful of supporters roaming about desultorily.

Meanwhile, Rashtriya Janata Dal leader Tejashwi Yadav, who had been targeting the newly installed government over Chaudhary's induction, came out with angry tweets over the "isteefe ka naatak" (the drama enacted around the resignation).

"Respected Chief Minister, we have the people's mandate to keep you on your toes.......just one resignation is not enough. We shall be taking on you over issues like 19 lakh jobs and pay parity for contractual workers. Jai Bihar, Jai Hind," Yadav tweeted in Hindi.

"Had I not said that you have become tired and, therefore, lost your power of judgement? You got a corrupt man appointed as minister, allowed him to take charge despite so much of condemnation and then got a drama enacted around his resignation. You are the real culprit.....you will no longer be allowed to get away with your duplicity," Yadav said in a series of tweets.

JD-U MLC and spokesperson Neeraj Kumar, who was a minister in the previous government, however, said Chaudhary's resignation was "yet another proof of Nitish Kumar's zero tolerance for corruption".

"I would now like RJD leader Tejashwi Yadav to take a leaf out of our leader's book. He and his family are neck deep in corruption cases. Hence, he must not remain the leader of the opposition," the JD-U leader said.