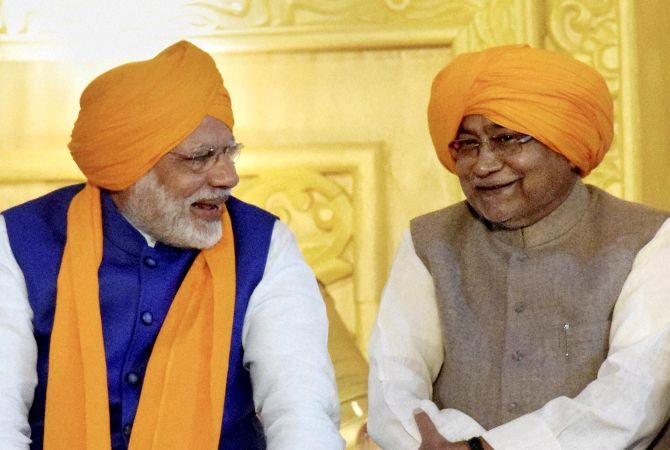 With the matter snowballing into a political controversy, both the Janaat Dal-United and the BJP tried to play down the issue.

The JD-U said Kumar had been practising yoga daily, even before June 21 was declared as the International Day of Yoga by the United Nations, adding that "it would be wrong to attach any political meaning to personal decisions".

When questioned about Kumar's absence at the event, both Prasad and Modi insisted that the presence or absence of a public figure at an event must not be politicised.

The chief minister, who himself is a regular yoga practitioner and is said to have learnt the ancient discipline from the masters at the renowned Bihar School of Yoga at Munger, has been critical of the mass-scale calisthenics organised on this date ever since the United Nations declared June 21 as the International Day of Yoga in 2015.

Speculation was, however, rife that Kumar might take part in the celebrations this year, following his return in August last year to the BJP-led NDA, which he had left in 2013. But, the JD-U chief was conspicuous by his absence from the event at Patliputra Sports Complex.

"We know Nitish Kumar is a yoga enthusiast. And that is what is important. Please do not politicise the issue," Union Law Minister Prasad, who had arrived from New Delhi to take part in the celebrations, told reporters.

Sushil Modi also played down the issue, saying many BJP leaders too could not make it to the event. "There may be many leaders, not just in the JD-U, but even in the opposition parties like the Rashtriya Janata Dal, who practise yoga regularly. Would you try to derive a political meaning out of that," he said.

JD-U spokesman Rajiv Ranjan Prasad told PTI that party leaders, including national president Nitish Kumar, started their day with yoga, adding, "We did so today also. We have been practising yoga since much before the International Yoga Day came into being. The discipline is centuries-old. There is no party stand, as such, with regard to taking part in the celebrations. Hence, it would be wrong to attach any political meaning to personal decisions."

Opposition RJD latched on to the issue of Kumar's absence from the International Yoga Day celebrations and launched an attack on him.

RJD national vice-president Shivanand Tiwary took a swipe at the chief minister, saying it was part of Kumar's old strategy to appear different from his allies and then make a volte face.

"He kept speaking against communalism before snapping ties with the BJP. While he was with us in the Mahagathbandhan, he had left us stunned by speaking in favour of demonetisation, something even the NDA constituents were not doing at that time.

"Ultimately, he ditched us and returned to the BJP-led coalition. He might be planning something similar now. The only problem is, he is left with nowhere to go," Tiwary, a former associate of the chief minister, said in a statement.

Considering the fact that due to Prime Minister Narendra Modi's efforts, the UN had declared June 21 as the International Yoga Day, the BJP and its allies, like the Lok Janshakti Party and the Rashtriya Lok Samata Party, took part in the associated events with enthusiasm across the state.

Union ministers Ram Vilas Paswan and Upendra Kushwaha, who head the LJP and the RLSP respectively, took part in the celebrations at Hajipur in Vaishali district, which is the Lok Sabha constituency of the former.

Union ministers Radha Mohan Singh and Giriraj Singh, both from the BJP, took part in the celebrations held in their respective parliamentary constituencies of Motihari and Nawada.