The Janata Dal-United said that it disagrees with its ally BJP's stand on the abrogation of Article 370 and 35A -- which pertains to special rights given to Jammu-Kashmir -- as well as the construction of Ram temple and instant talaq. M I Khan reports A day after the Bharatiya Janata Party released its manifesto, its major ally the Janata Dal-United made it clear that the party disagrees and differs with the BJP’s stand on Article 370 and 35A -- which pertains to special rights given to Jammu and Kashmir -- as well as on the construction of the Ram temple in Ayodhya and the issue of instant talaq.

"The BJP and JD-U have separate manifestos. We disagree with the BJP on the issues of Article 370 and 35A," said JD-U national general secretary K C Tyagi in reaction to the BJP's manifesto.

Clarifying its party's stand, Tyagi added that the two parties -- BJP and JD-U -- were separate. "We have strong reservations with the BJP on some issues despite being a part of the National Democratic Alliance."

Another senior JD-U leader, Neeraj Kumar, told Rediff.com that it was the JD-U that first forced the NDA government led by Atal Bihari Vajpayee not to touch upon controversial issues.

Last month, Nitish Kumar, who is the JD-U president, strongly opposed the demand for abrogating Article 370, amid the clamour for doing away with the special provision granting autonomy to Jammu and Kashmir in the aftermath of the Pulwama terror attack.

“We can never think of abrogating Article 370. Our party's stand has been clear on this issue, not to touch it," he had said.

Similarly, Nitish has repeatedly said that the JD-U has nothing to do with the issues of Ram temple and triple talaq. He also said the party favours consensus to resolve both issues through negotiations.

In its manifesto, the BJP has promised to build the Ram mandir at Ayodhya, introduce the Uniform Civil Code, abrogate Article 370 and annul Article 35A.

Union minister Ram Vilas Paswan, leader of the BJP's second ally -- the Lok Janshakti Party -- has not reacted to the manifesto so far. 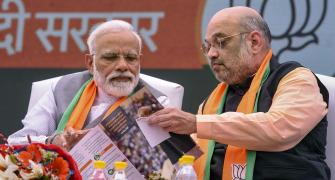 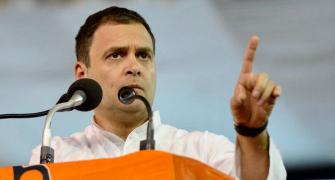 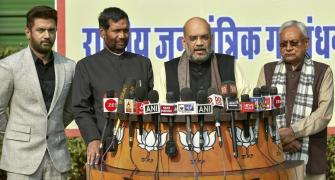 Seat-sharing for Bihar: BJP, JD-U to contest 17 each; LJP gets 6