Decks were cleared on Friday for the formation of a new government in Bihar with Nitish Kumar, who is set to return as the chief minister, handing over to Governor Phagu Chauhan the resignation of his ministry and the recommendation to dissolve the state assembly, officials said. 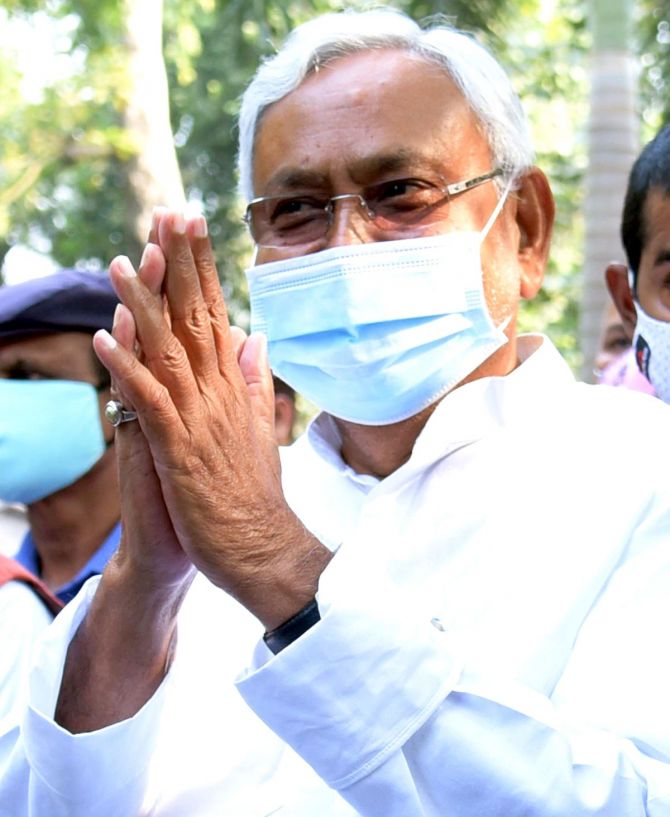 The governor accepted the resignation and asked Kumar to continue as the caretaker chief minister till the new National Democratic Alliance government is sworn in.

Earlier, leaders all the four constituents of the NDA -- Kumar's Janata Dal-United, Bharatiya Janata Party, Hindustani Awami Morcha-Secular and Vikassheel Insaan Party had met informally at 1, Anney Marg, the chief minister's official residence, where it was decided that all the newly elected NDA MLAs will meet on Sunday and formally elect Kumar as their leader.

"The meeting will start at 12:30 pm on Sunday, November 15 where all further decisions will be taken," Kumar had told reporters later.

He had also said the current state cabinet will be holding its last meeting in the evening where a decision on the dissolution of the assembly, the tenure of which expires on November 29, will be taken.

At the cabinet meeting, which lasted barely 10 minutes, the chief minister thanked all his cabinet colleagues for their cooperation, said Rana Randhir, a BJP leader who held the cooperatives portfolio in the dissolved cabinet and has returned as the MLA from Madhuban.

Informed sources also said issues discussed at the informal meeting of NDA leaders included the representation of each constituent in the new cabinet and election of the assembly Speaker.

Speculation is rife that the BJP might push for an EBC or a Dalit as a Deputy CM though it was not clear whether the
insistence was on replacing veteran leader Sushil Kumar Modi, who has been holding the post for the most part since 2005, or replicating the experiment in adjoining Uttar Pradesh where two leaders share the post.

One of the names doing the rounds for the Deputy CM's post is that of Kameshwar Chaupal, a Dalit with deep roots in
the Sangh who was famously chosen for laying the foundation stone at the Ram Janmabhoomi in Ayodhya in the 1990s.

Supporters of Chaupal, a member of the legislative council, lent credence to speculations as they were noticed chanting slogans to the effect on the streets of the city.

Meanwhile, the NDA which has three more MLAs than the magic figure of 122, received a shot in the arm when Independent legislator from Chakai Sumit Singh met the chief minister and extended support.

Singh is the son of Narendra Singh, a former state minister and powerful Rajput leader from Jamui district.