Portfolios were on Tuesday allocated in the new Bihar cabinet headed by Chief Minister Nitish Kumar who, predictably, retained the all-important home department which helps him keep direct control on the state police. 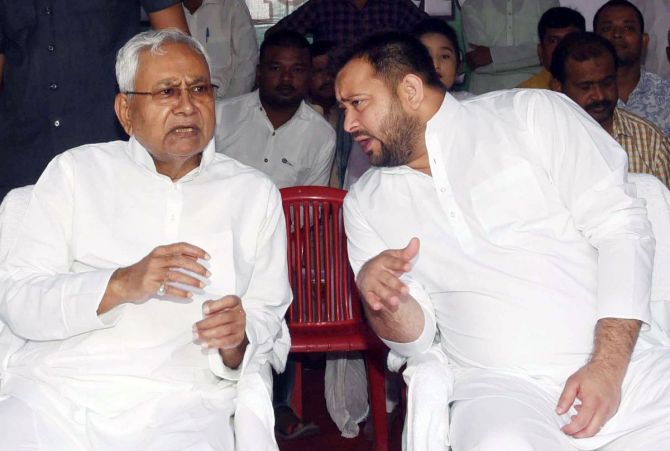 Most ministers of his Janata Dal-United were back with the portfolios they earlier held.

The Rashtriya Janata Dal and the Congress, the new allies in power, have got departments that were previously held by the Bharatiya Janata Party.

Besides Home, Kumar has kept with himself general administration, cabinet secretariat, election and 'any other departments not assigned to others', said an official communication.

Tejashwi Prasad Yadav, who is back as deputy CM after five years, has got key portfolios like health, road construction, urban housing and development and rural works.

Interestingly, Tej Pratap Yadav was the health minister in the previous 'mahagathbandhan' government of 2015-2017, and there were speculations in a section of the media that the temperamental leader 'wanted his department back'.

When the BJP shared power, the portfolio had remained with Mangal Pandey, a former state president of the party.

Besides the CM and the deputy CM, only Vijay Kumar Chaudhary (finance, commercial tax and parliamentary affairs), Bijendra Yadav (power and planning and development) and Sanjay Kumar Jha (water resources and information and public relations department) have got more than one portfolios. All three belong to the JD-U.

Allocation of finance to Chaudhary is a significant departure from the past as the portfolio has remained with the JD-U's allies for most part.

Then deputy CMs Sushil Kumar Modi and Tarkishor Prasad held the finance portfolio, while in the 'mahagathbandhan' part 1, RJD's Abdul Bari Siddiqui was in charge of finance.

Siddiqui, a seasoned politician, is currently not a member of either House in the state legislature and hence, has not been inducted into the ministry.

Vijay Kumar Chaudhary, however, has been divested of education which has gone to RJD's Chandrashekhar, an academic by profession.

JD-U minister Jayant Raj, whose rural works portfolio has been handed over to the deputy CM, will now hold minor water resources, which was previously held by Santosh Kumar Suman of Hindustani Awam Morcha (HAM).

Independent MLA Sumit Kumar Singh, who quit the National Democratic Alliance by way of solidarity towards the chief minister, will continue to hold science and technology.

The new industries minister is Samir Kumar Mahaseth of the RJD.

The department had of late been in a bit of limelight thanks to the dynamism of BJP leader Syed Shahnawaz Hussain who held the portfolio till his party lost power.