Nitish to be Bihar CM for 4th term, will take oath on Monday

Bihar chief minister Nitish Kumar on Sunday met Governor Phagu Chauhan, after being unanimously elected as the leader of the National Democratic Allaince, and staked claim for the formation of the new government in the state. 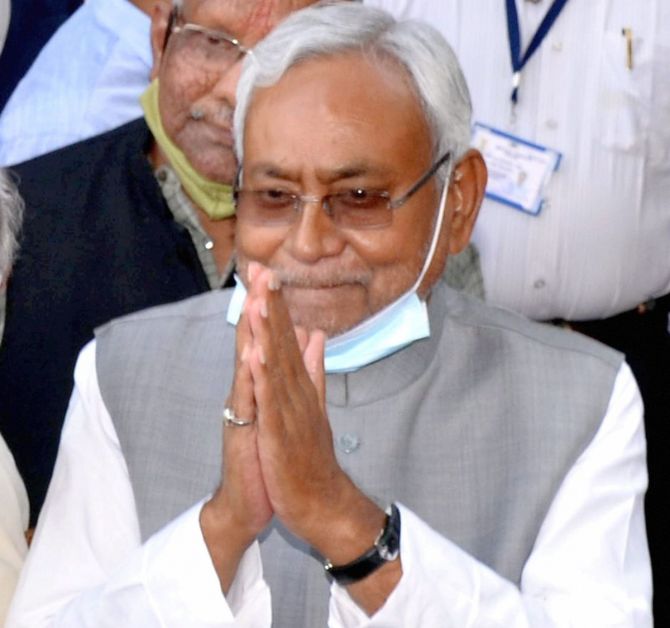 Talking to reporters outside his residence upon returning from the Raj Bhavan, Kumar said the swearing-in will take place Monday evening and parried questions about details like whether Bharatiya Janata Party leader Sushil Kumar Modi would be returning as his deputy.

"The governor was handed over the letter of support from all four constituents of the NDA. As per his direction, we shall be taking oath at the Raj Bhavan, tomorrow, around 4-4.30 pm", said Kumar, who is on course to become the longest serving chief minister of Bihar.

"After the swearing-in, we will convene the meeting of the cabinet where a decision on convening the assembly session will be taken", said Kumar but evaded queries as to whether the BJP, which has won more seats than the chief minister's Janata Dal-United, has sought a greater representation in the cabinet.

Asked about Sushil Kumar Modi, known to be close to Kumar, he quipped "all things will be settled".

Speculations have been rife that Modi may be replaced and these intensified after the senior BJP leader did not accompany Kumar to the Raj Bhavan but went to the state guest house along with defence minister Rajnath Singh, who has flown down as an observer of the BJP.

Shortly after Kumar's return from the Raj Bhavan, Singh and Modi met the governor, fuelling further speculations about future of the latter in the states politics.

Asked whether Sushil Modi will be the deputy chief minister again, Singh said "it will be known in due course."