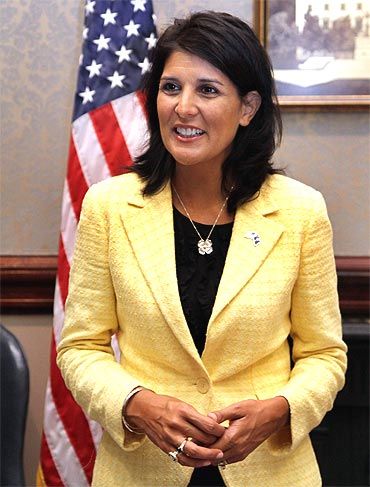 Haley, 44, considered a rising star in the Republican Party, had backed Senator Marco Rubio in the Republican primary. However, before the general elections, Haley came out in support of Trump, saying that she would be voting for the billionaire tycoon from New York.

The daughter of Indian immigrants, she would bring both racial and gender diversity to Trump’s cabinet.

Former New York mayor Rudy Giuliani is also a strong contender for the position, according to reports and sources.

In a conference call with reporters on Wednesday night, Trump’s transition team spokesman Sean Spicer listed 44-year-old Haley as one of the candidates the President- elect would be meeting on Thursday.

Among others the 70-year-old Trump would be meeting include former Secretary of State Henry Kissinger, General Jack Keane (retd), Admiral Mike Rogers and Ken Blackwell.

While some of these meetings are about potential cabinet members, others are about sharing ideas and advice.

Earlier in the day, a close aide of Trump from South Carolina said that Haley was being considered for a Cabinet position, including that of the Secretary of State.

“It would be like how Mr Trump is bringing fresh eyes to running our government,” South Carolina Lt Governor Henry McMaster told The Post and Courier. The daily did not provide any other details.

The Trump transition team has so far not given any indication of who all will be filling various Cabinet positions. The President-elect himself has tweeted that only he knows the final list.

McMaster, who started speaking with the Trump team soon after their historic victory told the local South Carolina daily that the first women governor of the State, who is also the first Indian-American woman governor, is being considered for various Cabinet positions, including the Secretary of State.

Neither the office of the South Carolina Governor nor the Trump transition team have responded to this report so far.

While the news was welcomed in South Carolina, a political analyst appeared to be skeptical of such a proposal.

“Secretary of state is going to be a bit of a stretch for Haley’s area of expertise. Haley has yet to be vetted about foreign policy, trade and protectionism,” said College of Charleston political scientist Kendra Stewart.

Haley is the second Indian-American name being floated for a Cabinet position in the Trump Administration. Former Governor of Louisiana Bobby Jindal is also appearing in many short lists of potential Cabinet names.

Flynn, 56, was one of the top military leaders to have endorsed Trump and has been his closest military advisor for more than a year now.

If selected, he would succeed Susan Rice as the national security advisor.

‘Like the president-elect, Flynn, a self-described ‘maverick’ and longtime Democrat, shares a penchant for unvarnished straight talk that has earned him praise from some and condemnation from others,’ the Review said.

In his latest book in August, he had advocated cutting off aid to Pakistan, if it continued to help the jihadis.

He served as the director of the Defence Intelligence Agency, commander of the Joint Functional Component Command for Intelligence, Surveillance and Reconnaissance, and chair of the Military Intelligence Board.