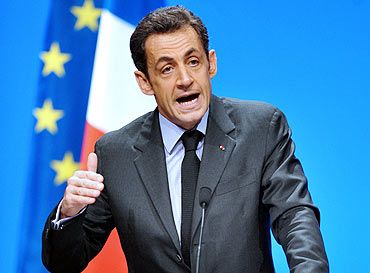 Former French leader Nicolas Sarkozy launched a fresh bid on Monday to win back the presidency, announcing he would seek the nomination of his centre-right party to run in next year's election.

The pugnacious 61-year-old conservative, who was deeply unpopular by the end of his five years as president, had made no secret of his ambition to reconquer the top office.

"I have decided to be a candidate in the 2017 presidential election," Sarkozy, who was voted out of office in 2012, wrote in the foreword to a new book "Tout pour la France" (All for France) due out later this week.

"France demands that you give her your all.

"I feel I have the strength to lead the fight at such a turbulent moment in our history," he wrote in the book extract seen by AFP, alluding to the string of terror attacks that have rocked the country in the past year and a half.

His aides said that he would be stepping down on Monday as the leader of the Republicans party to focus on his campaign.

"This book is the starting point," Sarkozy tweeted, together with a link to the foreword.

"The next five years will be filled with danger but also with hope," he wrote.

Sarkozy listed five main challenges in the years ahead: keeping promises made to the nation, defending national identity, restoring lost competitiveness, enforcing stat  authority and striving "to restore confidence and hope in the future".

His announcement that he will seek his party's nomination at a primary in November comes in the midst of a resurgent debate over the place of Islam in French society, encapsulated in the row over the Islamic "burkini" swimsuit.

Sarkozy said France's "principal battle" was over how "to defend our lifestyle without being tempted to cut ourselves off from the rest of the world".

The opposition leader, who has repeatedly dismissed Socialist President Francois Hollande as weak, said he would also restore authority in neighbourhoods where he said "minorities are successfully blackmailing the current authorities".

The politician, who was defeated in his bid for reelection in 2012 after conducting a campaign seen by many in his own camp as too right-wing, faces several challengers for the conservative nomination.

His chief rival, popular former premier and Bordeaux mayor Alain Juppe who is seen as a moderate, is the favourite to win the nod.

But Juppe's lead in opinion polls has shrunk in recent weeks as Sarkozy steps up his rhetoric on Islamist extremists and immigration in the wake of last month's massacre in Nice.

"War has been declared on us," Sarkozy said in an interview with Valeurs Actuelles magazine in mid-August.

"The barbarians who are attacking us believe we are weak," he said, calling for a "merciless" response.

Sarkozy has already won the support of a Republicans heavyweight in the shape of Christian Estrosi, president of the southern region that includes Marseille.

"He is the best candidate," Estrosi told the Journal de Dimanche on Sunday.

If Sarkozy wins, he could face a rematch against Hollande, who has said he too has the "desire" for a second term, despite opinion polls overwhelmingly showing the French wanting neither man as their leader.