The federal probe agency has wrapped up only one terror case since its inception in 2009. Vicky Nanjappa reports

It has been five years since the National Investigation Agency was set up and it has little to be proud of. The premier investigation agency, which was to combat terror, has cracked only ONE case and taken it to its logical end.

Investigations in many cases of utmost importance including the 2008 Mumbai terror attacks, after which the NIA was established, are progressing at a snail’s pace. It appears as though there is a clear lack of direction, say security experts.

It’s a bit harsh to say that the NIA is dragging its feet in the 26/11 case since most of the accused are not in India. However, it would not be wrong to say that there is a lack of will when it comes to other cases, they point out.

NIA’s only success has been the bomb blast at a bus depot in Kozhikode, Kerala. Two accused, including Lashkar-e-Tayiba terrorist T Naseer, have been sentenced to life imprisonment.

The NIA can pat itself on the back for this case, but it sure has a lot of introspection to do in the pending cases, experts say.

All incidents related to Hindu terror including attacks in Malegaon, Ajmer, Mecca Masjid and Samjhauta Express were handed over the NIA. When terror accused Swami Aseemanand made a confessional statement in 2011, the NIA thought they had nailed these cases. However, they could not use it to their advantage because of their lackluster approach.
Till date, investigators have been unable to file a definite chargesheet.

NIA officers did not expect Swami Aseemanand to retract. After he withdrew his statement, the probe agency was back to basics.

Today, they are struggling to find conclusive evidence against Sadhvi Pragya Singh and more importantly, have not been able to nab two other accused -- Ramji Kalasanghra and Sandeep Dange.

The situation is no different in the probe of Bodhgaya, Dilsukhnagar and Patna blasts. They have not made a major headway in any of the cases.

The NIA has failed to file chargesheets in 23 out of the 48 terror cases that it is handling. Among the few chargesheets that have been filed are pending before courts; the other cases have been slammed for shoddy probe.

“The investigation appears to be an absolute mess with none of the cases reaching its logical end. There is a rush for credit and this has angered the state police. The NIA boasts that it made 150 arrests of terror suspects. In reality all these arrests were made by the respective state police and handed over to the NIA, as the cases were transferred,” a security expert told rediff.com.

Moreover, there is also a lot of reliance on the state police for forensics and other information. It has been pointed out by the NIA several times that it is a victim of ego clashes.

The state police are disgruntled about a central agency entering into its jurisdiction. “Often they hide information to show the NIA in poor light.”

The NIA is considered a stooge of the central government. “The Bharatiya Janata Party-ruled states are less cooperative and this hampers probe,” experts say.

A few feel that the NIA deserves a bit of sympathy. “There’s no doubt that the NIA is overworked. They reach the terror spot within hours of an attack. And all they do is wait for the state police to share the initial information, which takes almost a day or even more,” the experts allege.

Then, the NIA waits for a directive from the home ministry to transfer the case. During this interim, both the state police and the NIA probe the same case independently.
By the time the case is handed over to the NIA, there is a massive mess since there are two versions to the investigations. The NIA then starts from scratch, according to experts.

And as they get working on the case, another one is dumped on them.

Image: Investigators at the site of the Delhi high court blast in September 2011 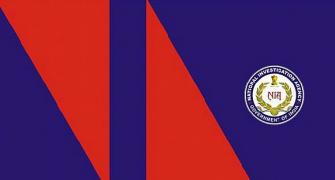 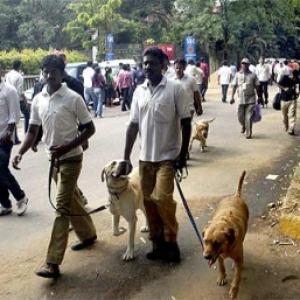