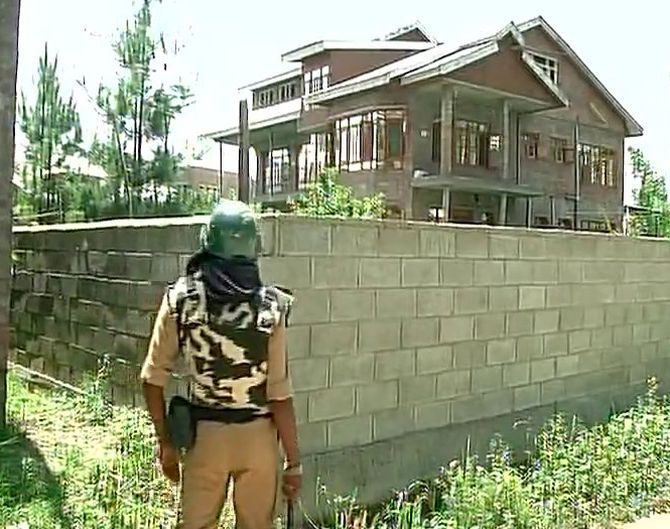 The National Investigation Agency probing the funding of subversive activities in Kashmir on Sunday conducted fresh raids in the residences of separatists leaders and other locations in the state and seized foreign currency, NIA officials said.

"During the searches, a few thousand Pakistani rupees and currencies belonging to the UAE and Saudi Arabia as well as incriminating documents were found and seized," an NIA spokesperson said.

Raids took place in the residence of Ayaz Akbar, spokesperson of the Tehreek-e-Hurriyat, led by Syed Ali Shah Geelani, and Peer Saifullah, another of Geelani's close aides, the officials said.

A similar exercise was undertaken at the Jammu residence and warehouse of a businessman, who the NIA sleuths believed was involved in a cross-border trade scam.

The NIA alleges that since the Cross-Line of Control trade, at Uri in Kashmir and Chakan-da-bad in Jammu, was based on a barter system, some businessmen "under- or over-invoiced" their bills, and the difference in payment was later used for promoting subversive activities in the valley.

An NIA spokesman in Delhi said in continuation of Saturday's searches at multiple locations in Kashmir, Delhi and Haryana, the NIA launched fresh searches on Sunday at locations belonging to secessionist and separatist leaders and traders, suspected of hawala activities and terror funding in Jammu and Kashmir.

"The searches are continuing and the concerned people are being questioned," the spokesman said.

In its effort to clamp down on separatist groups allegedly receiving funds for subversive activities in the valley, the NIA yesterday raided 29 locations.

They recovered unaccounted account books, Rs 2 crore in cash and letterheads of banned terror groups such as the Pakistan-based Lashker-e-Taiba and Hizbul Mujahideen.

The NIA spokesman said the investigation sought to probe the entire chain of players behind the financing of terrorist activities, including those who threw stones at security forces, burned down schools and damaged government establishments.

Bank accounts and lockers revealed during the probe had been frozen, the spokesman said.

In Saturday's raids, 85 gold coins and jewellery worth Rs 40 lakh were recovered.

The NIA had registered an FIR earlier and was camping in the valley for few days before beginning its raids.

This is for the first time since the rise of militancy in Kashmir in the early 1990s that a central probe agency carried out raids in connection with terror funding to separatists.

In 2002, the Income Tax department had executed searches against some separatist leaders, including Geelani, and seized cash and documents.

However, no criminal case was registered then.

While no separatist leader from the valley has been named in the FIR registered by the NIA, organisations such as the Hurriyat Conference (factions led by Geelani and Mirwaiz Umer Farooq), Hizbul Mujahideen, Dukhtaran-e-Milat and Lashker-e-Taiba, besides Pakistan-based chief of Jamaat-ul Dawah Hafiz Saeed, have been mentioned.

The raids were carried out following the questioning of three separatist leaders -- Nayeem Khan, who was seen on television during a sting operation purportedly confessing to receiving money from Pakistan-based terror groups, Farooq Ahmed Dar alias 'Bitta Karate' and Gazi Javed Baba of Tehreek-e-Hurriyat, in the national capital last month.