The National Investigation Agency has arrested two close aides of gangster Chhota Shakeel for allegedly handling the illegal activities and financial transactions of the crime syndicate controlled by fugitive underworld don Dawood Ibrahim, and for indulging in terror financing in the western suburbs of Mumbai, an official said on Friday. While Arif was arrested from Goregaon West in suburban Mumbai, Shabbir was held from Mira Road East in neighbouring Thane district, he said.

"Both of them were apprehended by a team of the NIA, which is probing the cases against D-Company -- Dawood Ibrahim's syndicate," the official said, adding that the duo was closely associated with gangster Chhota Shakeel and were involved in the cartel run by Ibrahim.

"They were involved in illegal activities of the D-Company and were indulging in terror financing in the western suburbs of Mumbai," he said.

Sources said that during the recent raids at multiple locations in Mumbai and Thane, the NIA had picked up many suspects for investigation.

Arif and Shabbir were also among the suspects who were picked up for their alleged connections with the D-Company (Dawood Ibrahim's crime syndicate), they said.

During their interrogation, the NIA team found that Arif and Shabbir had carried out some transactions with Chhota Shakeel, following which they were placed under arrest, they added.

Both the accused will be produced before the NIA special court later in the day, he added.

The NIA had registered a suo motu case against the Dawood Ibrahim's crime syndicate on February 3.

They indulged in arms smuggling, narco terrorism, money laundering, circulation of fake currency and are in unauthorised possession/involved in acquisition of key assets for raising terror funds and working in active collaboration with international terrorist organisations, including Lashkar-e-Taiba (LeT), Jaish-e-Mohammad (JeM) and Al Qaeda (AQ), it added.

The NIA had on Monday detained Chhota Shakeel's aide Salim Qureshi aka Salim Fruit in Mumbai after conducting raids at over 20 places here and in adjoining Thane district against associates of Dawood Ibrahim.

The central agency had conducted raids at a housing society in Mumbai's Nagpada area, Bhendi Bazar, Santacruz, Mahim, Goregaon areas of Mumbai, Mumbra in Thane and other places against Dawood Ibrahim's aides. 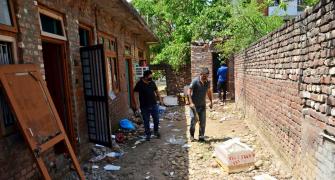 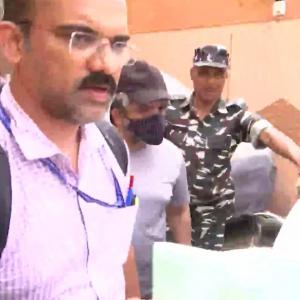