By A Correspondent
February 11, 2010 16:57 IST
In a memorandum to Uttar Pradesh Chief Minister Mayawati on Thursday, several NGOs demanded the release of Peoples Union of Civil Liberties organising secretary Seema Azad and her husband, who are currently being held for suspected Naxal links.

Three persons--the Allahabad-based couple and a woman from Gorakhpur--were arrested by the Special Task Force of the Uttar Pradesh police for suspected Maoist links on February 6. The police stated that the arrests followed information about that members of the banned Communist Party of India-Maoist were trying to establish their base in Uttar Pradesh.

At a protest in New Delhi, the organisers including the PUCL, Peoples Union of Democratic Rights and others, demanded the dropping all charges against Seema who is also the editor of a monthly magazine, Dastak. She has been raising her voice in Support of those who have faced police brutality and have alleged atrocities.

While suspecting that the police arrested her to take 'revenge', the protesters demanded an objective inquiry into the role of the police in arresting a person under the unlawful activities Act, especially someone who has been a human rights activist. 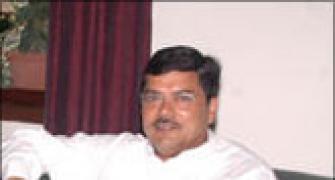 UP cracks down on Maoists, top leaders held