The Congress on Thursday took a swipe at Finance Minister Nirmala Sitharaman over her absence at a pre-budget meeting with economists and experts at the Niti Aayog in New Delhi which was chaired by Prime Minister Narendra Modi. 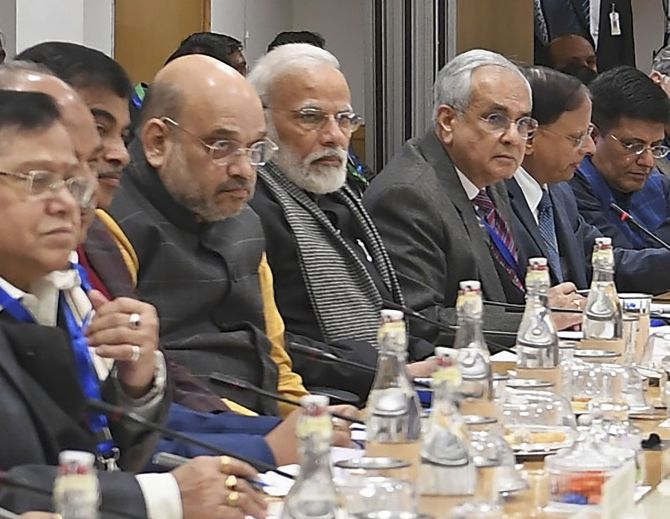 IMAGE: Prime Minister Narendra Modi with other Union ministers interacts with the economists and experts in a meeting at NITI Aayog in New Delh. Photograph: PIB/PTI Photo

"Here's a suggestion, next budget meeting, consider inviting the Finance Minister," the Congress said on its official Twitter handle, using the hashtag "FindingNirmala".

"How many men does it take to do a woman's job," the opposition party said in another tweet, using the same hashtag.

The Congress tagged a tweet of the BJP that said the finance ministry has invited suggestions for the Union Budget 2020-21.

"Citizens from all walks of life are welcome to be a part of this exercise," the tweet on the BJP twitter handle said.

Finance Minister Nirmala Sitharaman was not present as the Prime Minister met economists, private equity and venture capitalists, business leaders and agri experts at Niti Aayog and called for focussed efforts from all stakeholders to achieve the target of nearly doubling the size of the Indian economy to USD 5 trillion by 2024.

BJP sources said Sitharaman was holding pre-budget meetings with party workers at the BJP headquarters at that time.

Later, Sitharaman's office clarified that the FM had already met the industrialists, experts, and economists during the pre-budget consultations.

"Sir, the minister has already met industrialists, experts, and economists during the pre-budget consultations," Sitharaman's office tweeted while replying to Congress leader Shashi Tharoor's tweet which said," Where is the Finance Minister? Or has the Duo forgotten they have one?"