The Congress Working Committee (CWC) on Saturday decided that elections for the new Congress president would be held between August 21 and September 20 next year with a majority of party leaders urging Rahul Gandhi to assume the top post, a request he said he would consider. 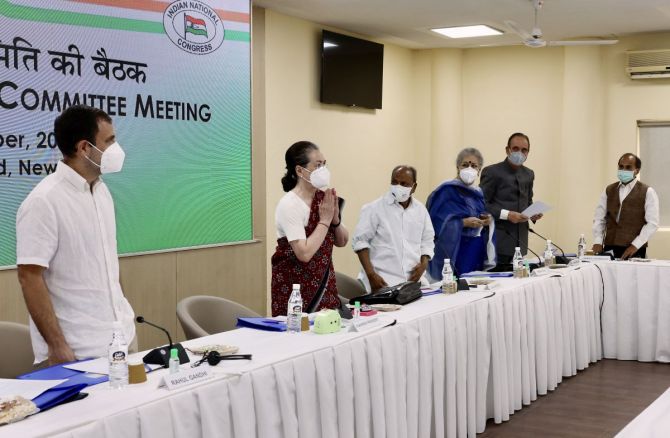 Addressing the all-important meeting, Sonia Gandhi asserted that she is a "full-time, hands-on Congress president" and asked party leaders to speak directly to her instead of speaking through the media, in a clear message to those criticising the leadership publicly.

This comes days after some sections within the Congress, especially the G23 leaders, questioned the absence of an elected party chief and also the decision-making process in the party.

The top decision-making body of the Congress also finalised the schedule for elections to all party positions from the block to national level starting April 16, a demand raised by the G-23 in their letter to Sonia Gandhi last year seeking organisational overhaul.

The schedule for organisational polls was welcomed by senior leaders and G-23 members Ghulam Nabi Azad, Anand Sharma and Mukul Wasnik present at the CWC meeting.

Over 40 leaders of the party while speaking during the over four-hour meeting urged Rahul Gandhi to assume the charge of Congress president and lead the party following which he said he "would consider their request" while thanking them for reposing faith in him.

Prominent among those who supported Rahul Gandhi in assuming the top post in the party included chief ministers Ashok Gehlot, Bhupesh Baghel and Charanjit Singh Channi, besides senior leaders including A K Antony, sources said, adding that there was no objection from anyone on this proposal.

The CWC, which was held physically after a gap of 18 months due to the Covid situation, also passed three resolutions on the political situation in the country, the economic situation due to high inflation and price rise, and another on the acute agrarian crisis and diabolical attack on farmers.

AICC general secretaries K C Venugopal and Randeep Surjewala announced the election schedule which includes a massive membership drive for the polls starting from November 1 that will go on till March 31, 2022.

They also stated that election of PCC presidents, vice presidents, treasurers, PCC executives and AICC members by PCC general body will be held between July 21 and August 20.

Venugopal also announced that election of CWC members and other bodies by AICC members will take place at a plenary session dates, for which will be announced later.

He also said that the Congress will undertake a mass agitational programme across the country over rising prices from November 14 to 29.

Former Congress chief Rahul Gandhi, general secretary Priyanka Gandhi Vadra, three Congress chief ministers among others, attended the meeting, the first such physical meet of the CWC since the outbreak of the COVID-19 pandemic.

Earlier in her inaugural address, Sonia Gandhi said, "I am, if you will allow me to say so, a full-time and hands-on Congress president," which is seen by many as a response to Kapil Sibal's comments last month as to who was taking decisions in the party in the absence of a full-fledged Congress chief.

She also asserted that she has always appreciated frankness and there was no need to speak to her through the media.

"So let us all have a free and honest discussion. But what should get communicated outside the four walls of this room is the collective decision of the CWC," she said.

Sibal, one of the leaders of the group of 23 who had written to Sonia Gandhi for organisational overhaul last year, had demanded that an immediate meeting of the CWC be convened and wondered who in the party was taking decisions in the absence of a full-time president.

The G-23 leaders had been demanding that a CWC meeting be convened, with Sibal last month wondering who in the party was taking decisions in the absence of a full-time president.  He has asserted that the G23 leaders' grouping is "not a Jee Huzur 23".

In her remarks at the meeting, Sonia Gandhi asserted that every member of the party wants a revival of the Congress, but that requires unity and keeping the party's interest paramount.

"Above all, it requires self-control and discipline," she added.

Recalling that the Congress had finalised a roadmap for electing a regular Congress chief by June 30 but that deadline was extended indefinitely due to second wave of Covid, Sonia Gandhi said today was the occasion for bringing clarity once and for all on the issue of the organisational polls.

The meeting of the CWC was convened after demands from some quarters to discuss important issues, including some defections in the recent past.

The meeting also came amid rumblings within the Congress's units such as in Punjab, Chhattisgarh and Rajasthan, states where the party is in power.

The Congress in its CWC meeting held on January 22 had decided it would have an elected president by June 2021. But it was deferred at the May 10 CWC meet because of the COVID-19 situation.

Sonia Gandhi took over as the interim Congress president in August 2019 after Rahul Gandhi resigned in the wake of the party's Lok Sabha debacle in May 2019.

There have been demands from a section of Congress leaders for having a full-time and active party president as well as an organisational overhaul.

The demand became intense after a storm in the party in August last year over a letter to Sonia Gandhi by the group of 23 leaders, including Azad, Sharma, Bhupinder Hooda, Prithviraj Chavan, Sibal, Manish Tewari and Wasnik, raising these issues. 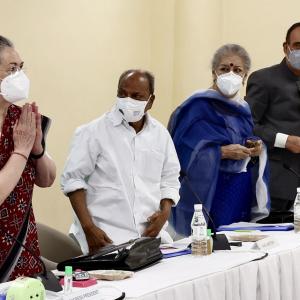