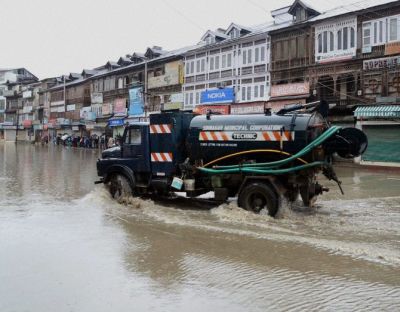 The tourist arrivals in picturesque Kashmir may drop significantly this season as travel industry blamed television news channels for hyping the flood situation in the Valley, leading to mass cancellation of bookings.

The tourism players accused the TV channels of creating a "fear psychosis" about the flood situation in the Valley, contrary to the ground situation.

"I don't understand why is media against Kashmir. The water has already gone but they still show Kashmir is in flood. Wish they understand how important the coming season is for Kashmir," Umar Malik, a travel agent, said.

Incessant rains on Saturday and Sunday resulted in sudden surge in water level of river Jhelum and other water bodies in Kashmir, giving rise to fear about a possible repeat of devastating floods that hit Kashmir last year.

However, with the weather holding up for past two days, the water level has receded significantly in Jhelum and its tributaries.

"These channels are still showing visuals which indicate that entire Kashmir is flooded. They should show the actual situation," Masroor Hussain, a general manager at a hotel here, said.

He said the constant focus on flood situation in Kashmir has resulted in up to 50 per cent cancellation of bookings by intending visitors.

"April to June is the peak tourism season in Kashmir... we were hoping to make good some of the losses suffered during last year's flood but this negative publicity is hurting us badly," Hussain said.

Sheikh Basharat Ahmad, another travel agent, said he had worked very hard selling packages during the winter months at various travel marts across the country but now everything seems to be going down the drain.

"The unnecessary and constant focus on situation in Kashmir has brought prospects of my business for this year down from good to worse than last year," he added.

Irshad Parray, who works in the hospitality industry, said media should act responsibly and not go after TRPs.

"Media should act in a very sensitive and responsible way highlighting the flood panic which is good on one side but on the other hand they should also highlight the safe and prosperous tourist spots of Kashmir," he said.

Former Jammu and Kashmir Chief Minister Omar Abdullah on Tuesday appealed to tourists not to cancel their booking for visiting Kashmir in view of flood threats.

"Those of you with bookings to visit Kashmir please PLEASE don't rush to cancel. Instead I request you wait to see how things develop," Omar wrote on twitter.

The working president of National Conference said the tourism industry had bad year since the September floods last year.

"The tourist industry had a disastrous Autumn & a really bad winter because of the floods. Finally things were looking up in April.”

"Now because of the recent rains & accompanying news stories hotels are reporting up to 40 per cent cancellations which is a disaster for them. So my earnest appeal to you is please keep the faith, don't rush to cancel. Wait to see how the next few days go & then decide, he added.”

Omar asked his followers to retweet his tweets as a favour to the tourism industry of the Valley.

"I've never asked for RTs before but as a favour to the tourist industry of Kashmir please RT my last 4 tweets as many times as possible," he said.