The government said on Tuesday it had been evaluating the implementation of the decentralised model of vaccination since its launch on May 1 and that the decision to centralise it again was taken after detailed deliberations and following requests by some states, amid claims by the Opposition that the policy change was due to the Supreme Court's intervention. 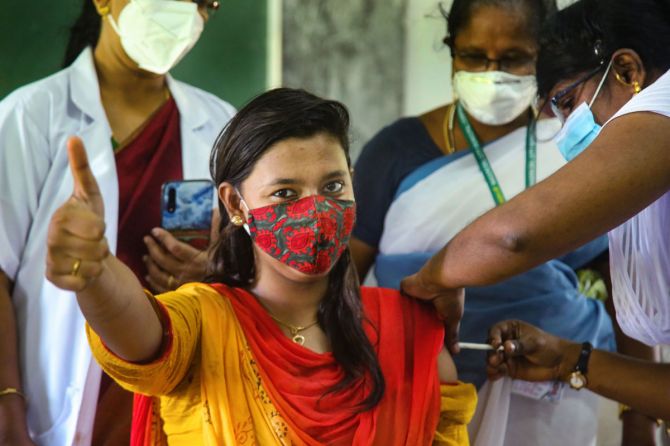 IMAGE: A woman shows thumbs up as she receives a dose of the COVID-19 vaccine, at a vaccination camp organised by Nagercoil Municipal Corporation, at Hindu college in Kanyakumari district, on Monday. Photograph: PTI Photo

On Monday, Prime Minister Narendra Modi announced that the Centre would take over the state procurement quota and provide free jabs to state governments for inoculation of all above the age of 18 from June 21.

The opposition parties claimed that the new guidelines for vaccination were issued after the Supreme Court questioned the Centre's policy of paid vaccination for the 18-44 age group.

Asked if the new vaccination guidelines were issued after the Supreme Court's intervention, NITI Aayog Member (Health) V K Paul said, "We respect the Supreme Court's guidance and concern, but the government was evaluating the implementation of the decentralised model since May 1."

Paul said that in the last one month, 12 states, including Maharashtra, Kerala, Sikkim, Rajasthan, Jharkhand, Odisha and Andhra Pradesh, requested that there must be centralised procurement so that implementation of the programme can be done in a concerted way.

Noting that such decisions are not taken 'overnight', Paul said the new guidelines are based on analysis, feedback, experience and consultation with various stakeholders.

"These decisions are not taken overnight and these all deliberations were going on since the beginning and the PM took feedback in high-level meetings on May 15 and May 21 and gave direction of thinking of alternative model. It became clear that we need to modify the system prevailing at the time, and...May 24 a team reached out to manufacturers and held meetings...," he said.

"Other teams reached out at state levels and we made arrangements and the PM was presented it 10-15 days back and then the decision was made.

"With full confidence I can say that our feedback and monitoring programme has been going on from the very beginning, (and) by May 15 some pattern was emerging and we started getting feedback," Paul added.

Talking about the new guidelines, Paul said states wanted to take part in implementing the programme and in procurement and also have flexibility with regard to the priority groups.

He assured that the new guidelines will go a very long way in galvanising vaccination programme and save the nation from any new onslaught of the virus.

On the pandemic situation, Paul said the decline in cases was because of discipline and exhibited societal behaviour.

"Discipline is at both Centre and state and local government levels and now we will go through a critical time as the restrictions slowly gets eased so that again the cases don't increase so we need to follow Covid-appropriate behaviour.

"If we stay careful for the next 5-6 months then this vaccination programme will accelerate and we will be able to save ourselves," he added.

Health Ministry Joint Secretary Lav Agarwal said there has been a continued and sharp decline in daily new coronavirus cases in the country.

He said almost a 79 per cent decline in daily new COVID-19 cases has been noted as compared to the peak of May 7.

Despite consistent increase in weekly tests, he said, a sharp decline in weekly positivity has been noted.

The daily positivity rate has dropped to 4.62 per cent after almost two-and-half months, he said, adding an overall decrease in positivity in all states except for two has been observed, Agarwal added.

All India Institute of Medical Sciences Director Dr Randeep Guleria said, "We need to keep following Covid-appropriate behaviour till we can say that a significant number of our population is vaccinated.

"When enough people will be vaccinated and natural immunity will be developed then these waves will stop."

The data collected from both the waves of the pandemic in the country or globally showed that neither new variants nor the old ones caused severe infection in children, he said.

He said according to the data of the second wave, 60-70 per cent of the children who were admitted were those with co-morbidities, or they were immuno-compromised or on chemotherapy.

The healthy children had mild illness and they recovered without being hospitalised, he said.

Talking to the media on sidelines, Paul said no decision on granting indemnity to vaccine manufacturers has been taken yet and that applications of Pfizer and Moderna are still under consideration.