A day after Bhupendra Patel took over as Gujarat chief minister, Bharatiya Janata Party sources indicated that the swearing-in of more ministers is likely in the next two days. 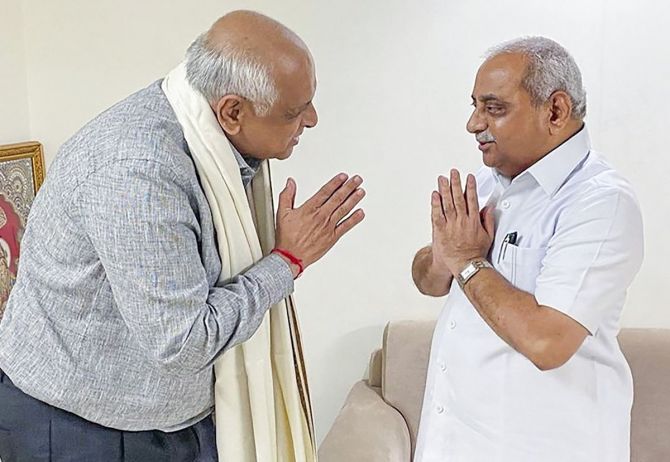 Only Patel, 59, had taken oath on Monday after the sudden resignation of Vijay Rupani on Saturday.

"Discussions are going on and the swearing-in will take place either Wednesday or Thursday," Gujarat BJP spokesperson Yamal Vyas told PTI on Tuesday.

As per the procedure, the names of ministers will be declared when they take the oath, he said.

There is speculation in BJP circles on whether Nitin Patel, deputy CM in the Rupani-led ministry, is retained in the new cabinet.

There is also talk on the chances of Bhupendrasinh Chudasama, R C Faldu and Kaushik Patel, senior ministers in the Rupani cabinet, being retained.

Party sources said efforts will be made to accommodate senior leaders in the cabinet as far as possible.

Patel was unanimously elected BJP legislature party leader on Sunday and was sworn in as the state's 17th chief minister by Governor Acharya Devvrat in Gandhinagar on Monday.

Shah was present in the oath-taking ceremony.

Rupani, the fourth chief minister to demit office in BJP-ruled states during the coronavirus pandemic, completed five years in office on August 7 this year.

With state Assembly polls scheduled in December 2022, the BJP is banking on Patel, a Patidar, for poll victory.