New farm laws an attack on soul of every farmer: Rahul

Congress leader Rahul Gandhi on Saturday stepped up his attack on the central government over the recently enacted farm laws, and said these are a blatant attack on the soul of every farmer and that such legislations 'weaken' the country's foundation. 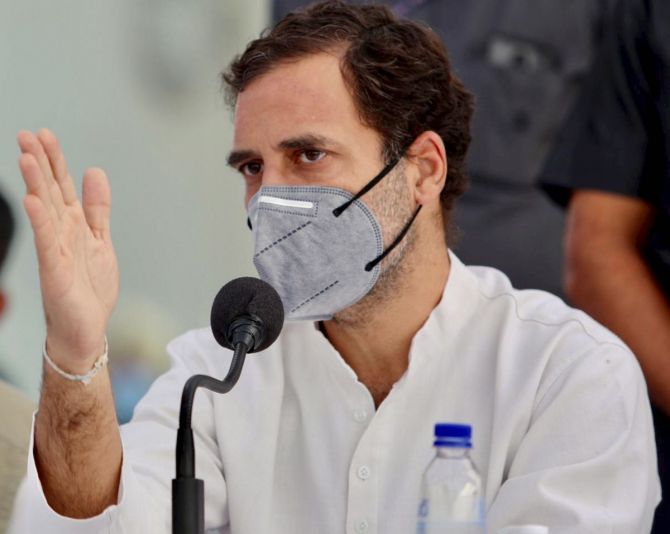 "And farmers and labourers of this country understand this," he said.

He said he was happy that the Punjab government has decided to convene a special session of the assembly on these laws on October 19 where MLAs will 'decide about these farm laws'.

Gandhi was delivering a virtual address at the launch of the second phase of 'Smart Village Campaign' in Punjab.

Rs 2,663 crore has been allocated to execute approximately 50,000 different development works under the campaign.

Punjab Chief Minister Amarinder Singh, some of his cabinet colleagues were among those present at the virtual launch.

Hitting out at the Bharatiya Janata Party-led central government over the farm laws, Gandhi said, "If we weaken country's foundation, India will be weakened."

"When Congress party fights, we do that to protect and strengthen the foundation. This is the difference between us and the central government.

"They talk of the building, but they thrust schemes from the top without talking to the panchayat and the people and their laws weaken India's foundation," he said.

"If these laws were in favour of farmers and labourers, then why did the government not allow a debate before these were passed in Lok Sabha and Rajya Sabha?

"Why were they afraid of a debate? Entire country would have seen the debate and decided if these laws are for farmers' benefit," he said.

"But in Lok Sabha and Rajya Sabha, voice of India's farmers was suppressed. I am happy that in Punjab assembly, farmers, labourers' voice will be heard in the special session," said Gandhi.

The Congress, many other opposition parties and several farmers organisations have been protesting against these legislations, claiming that these will harm the interests of farmers and benefit corporates, a claim denied by the government.

Gandhi said the Centre had launched an assault on Punjab and its farmers with these ill-conceived laws.

Representatives of all the Punjab village panchayats participated in the virtual launch programme.

"When Congress runs a programme, be it MNREGA, Right to Food Act or rural infrastructure programme, we run it through medium of panchayats...because we know if we involve panchayats, programmes can run effectively.

"If we thrust our programmes from the top without involving panchayats and area MLAs, it is bound to fail because it won't involve people," he said.

"I am saddened, people of Punjab too are saddened that the Centre is attacking Punjab's soul," he said in reference to the new farm laws.

Chief Minister Singh said the Centre's new farm laws will be debated in the special session of the Assembly on Monday with the aim to aggressively and effectively combat the damaging impact of the legislations on farmers.

Asserting that his government will take all steps to counter the 'black laws' and protect the farmers of Punjab, Singh said he will spend every single day of the rest of his life for the revival of Punjab.

He also announced his government's decision to give proprietary rights to those settled in 'Lal Dora' land for long.

'Lal Dora' refers to land that is part of the village 'abadi' (habitation) and is used for non-agriculture purposes only.

Expressing happiness on Gandhi being part of the event, the chief minister said Smart Village Campaign would lead to the creation of enormous rural infrastructure to raise the living standard and quality of life by capitalising on technological advances, as part of his government's Rural Transformation Strategy.

He assured that adequate allocation would be made for the schemes to be undertaken under the second phase.

The first phase of the campaign was launched in 2019.