Netanyahu slams Obama on his turf; warns against paving Iran's path to the bomb

Likening Iran to the Islamic State, Israeli Prime Minister Benjamin Netanyahu has asked the United States Congress to take a harder line against Tehran to prevent it from acquiring nuclear weapons and stop its march of conquest, subjugation and terror. 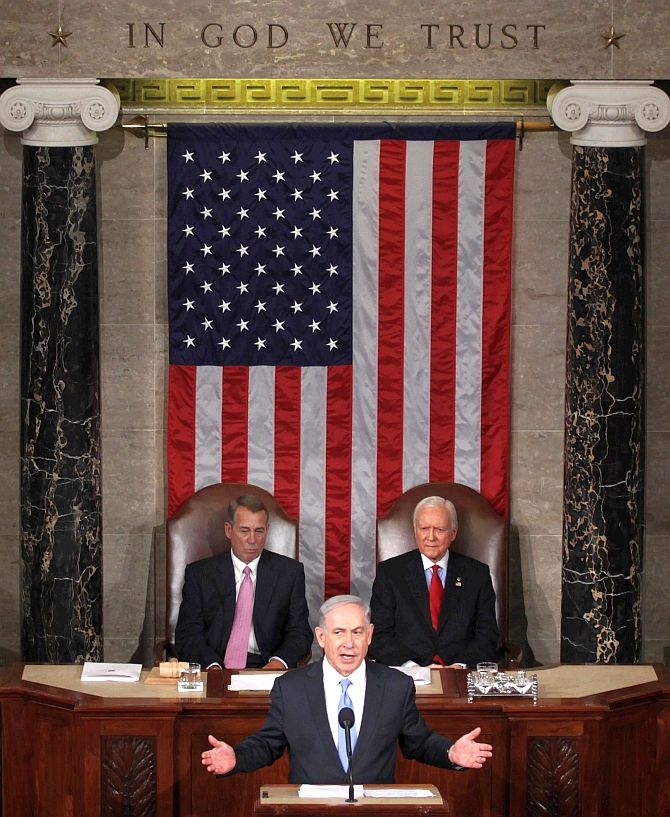 Image: Israeli Prime Minister Benjamin Netanyahu speaks about Iran during a joint meeting of the United States Congress in the House chamber at the US Capitol. Photograph: Alex Wong/Getty Images

Netanyahu warned that if the US-Iran nuclear deal is accepted "that deal will not prevent Iran from getting nuclear weapons," but "it will guarantee" Iran gets the bomb.

"For over a year, we have been told that no deal is better than a bad deal. Well, this is a bad deal. It is a very bad deal. We're better off without it," Netanyahu said in his address to the US Congress which was attended by lawmakers from both the Republican and the Democratic parties.

"This deal has two major concessions: one, leaving Iran with a vast nuclear program and two, lifting the restrictions on that program in about a decade. That's why this deal is so bad. It doesn't block Iran's path to the bomb; it paves Iran's path to the bomb," Netanyahu said as he lashed out at the Barack Obama administration's effort to enter into a deal with Iran on the latter's nuclear weapons policy. 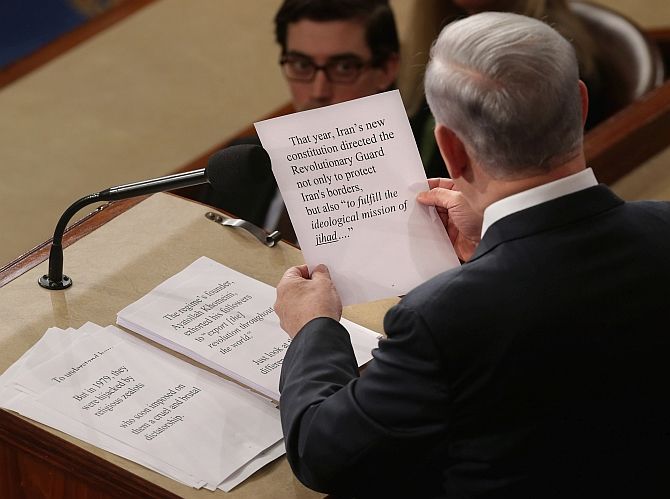 Image: Netanyahu holds up a sheet of his notes while talking about Iran during a joint meeting of the US Congress in the House chamber at the US Capitol. Photograph: Chip Somodevilla/Getty Images

"We must all stand together to stop Iran's march of conquest, subjugation and terror," he said.

Netanyahu said Iran is playing a "deadly 'Game of Thrones' and warned that the country's regime "poses a great threat not only to Israel but also to the peace of the entire world."

Iran and the Islamic State are "competing for the crown of militant Islam," Netanyahu said. 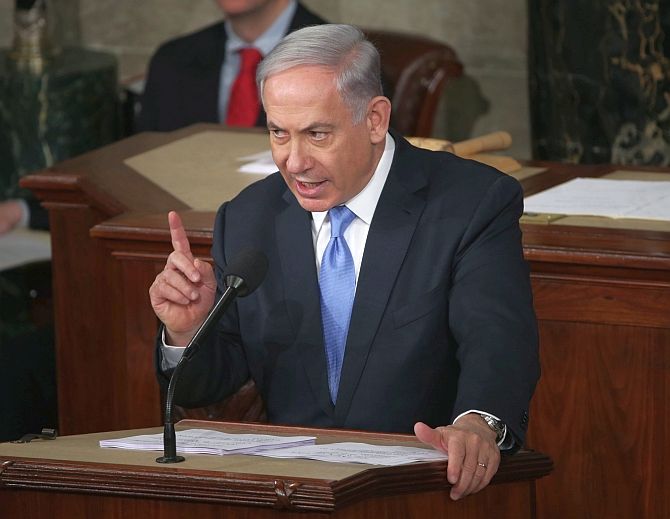 Image: At the risk of further straining the relationship between Israel and the Obama administration, Netanyahu warned members of Congress against what he considers an ill-advised nuclear deal with Iran. Photograph: Alex Wong/Getty Images

"Iran's regime is as radical as ever, its cries of 'Death to America', that same America that it calls the 'Great Satan', as loud as ever."

"Now, this shouldn't be surprising, because the ideology of Iran's revolutionary regime is deeply rooted in militant Islam, and that's why this regime will always be an enemy of America," said the Israeli Prime Minister.

"Don't be fooled. The battle between Iran and ISIS doesn't turn Iran into a friend of America. Iran and ISIS are competing for the crown of militant Islam. One calls itself the Islamic Republic. The other calls itself the Islamic State. Both want to impose a militant Islamic empire first on the region and then on the entire world. They just disagree among themselves who will be the ruler of that empire," he said.

Netanyahu asked the United States to enact tougher sanctions in order to force a harder line against Iran, and such legislation is already being debated in the Senate. But President Barack Obama has threatened to veto any such legislation, saying it could derail the talks. 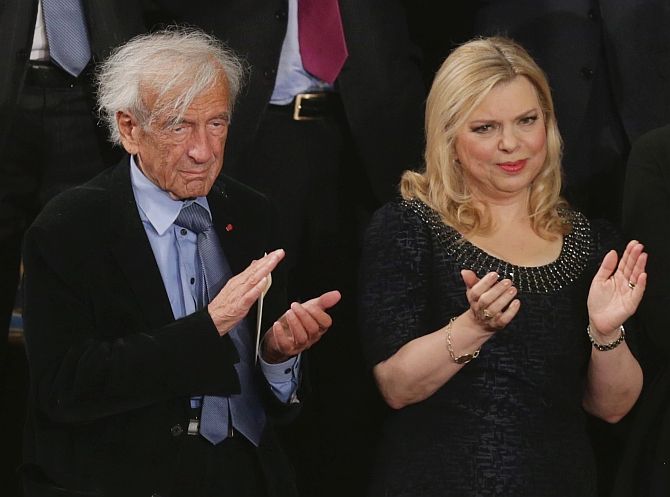 "If anyone thinks this deal kicks the can down the road, think again. When we get down that road, we'll face a much more dangerous Iran, a Middle East littered with nuclear bombs and a countdown to a potential nuclear nightmare," Netanyahu told the jam-packed joint session of the US Congress, which was marked by several rounds of standing ovations and applauses.

"I've come here today to tell you we don't have to bet the security of the world on the hope that Iran will change for the better. We don't have to gamble with our future and with our children's future. We can insist that restrictions on Iran's nuclear program not be lifted for as long as Iran continues its aggression in the region and in the world," he said.

The US, he claimed, is keen to enter into a deal with the Iranian regime so as to defeat the ISIS. 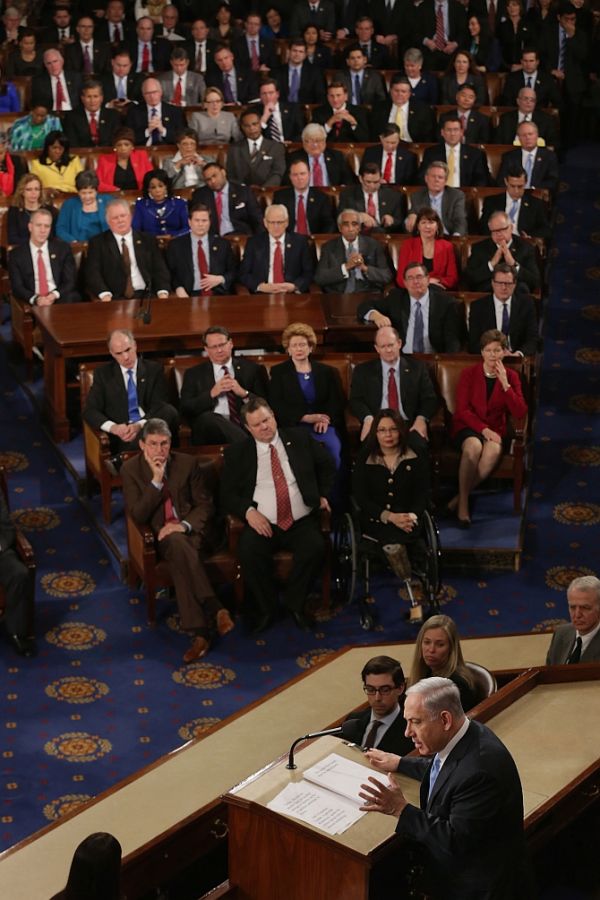 The Obama administration has expressed his opposition to Netanyahu's joint address to the Congress. US President Obama is not meeting Netanyahu during his current visit.

"So when it comes to Iran and ISIS, the enemy of your enemy is your enemy. The difference is that ISIS is armed with butcher knives, captured weapons and YouTube, whereas Iran could soon be armed with intercontinental ballistic missiles and nuclear bombs. We must always remember the greatest danger facing our world is the marriage of militant Islam with nuclear weapons.

"To defeat ISIS and let Iran get nuclear weapons would be to win the battle, but lose the war. We can't let that happen," he said. 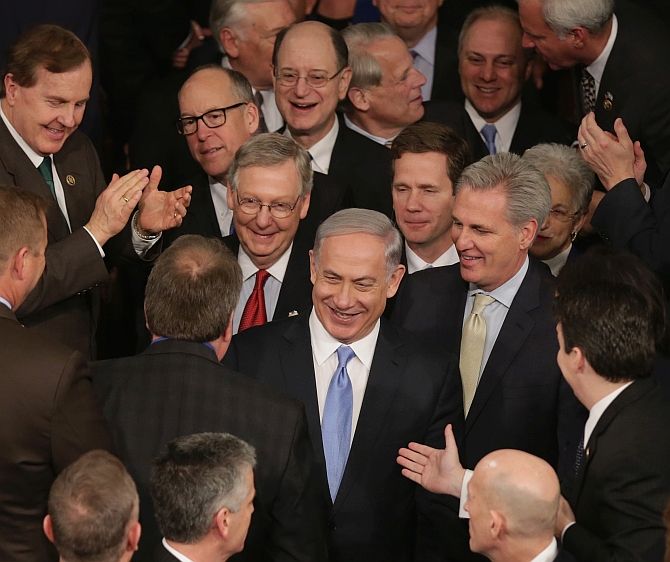 Image: Netanyahu is greeted by members of Congress after his speech in the House chamber at the US Capitol. Photograph: Chip Somodevilla/Getty Images

Before lifting economic restrictions, he said, the world should demand that Iran do three things, "First, stop its aggression against its neighbors in the Middle East. Second stop supporting terrorism around the world. And third, stop threatening to annihilate my country, Israel, the one and only Jewish state."

Source: PTI© Copyright 2021 PTI. All rights reserved. Republication or redistribution of PTI content, including by framing or similar means, is expressly prohibited without the prior written consent.
Related News: Benjamin Netanyahu, Iran, US Congress, ISIS, Islamic State
Print this article