Facing flak on social media, Nestle India on Thursday said it has 'already withdrawn' from the market packs of its popular chocolate brand Kitkat which depicted images of Lord Jagannath, Balabhadra and Mata Subhadra on wrappers, and also expressed regret over the incident. 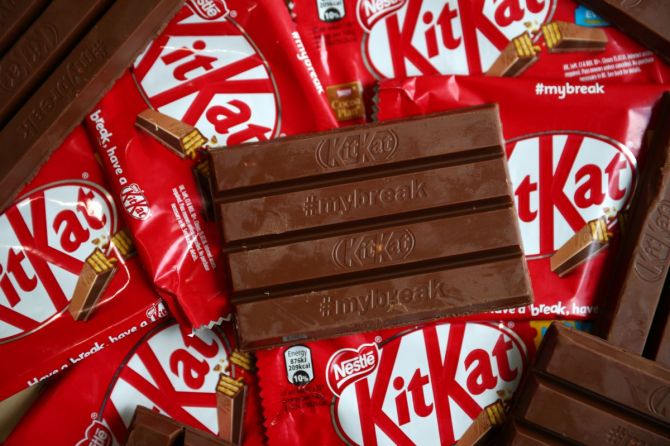 Nestle India, the Indian subsidiary of the Swiss multinational FMCG giant Nestle, had to face on social media the wrath of consumers, who accused the company of hurting religious sentiments by using the sacred images on Kitkat wrappers.

The company expressed regret and said that as a pre-emptive action, it withdrew those packs from the market last year.

'We do understand the sensitivity of the matter and regret if we have inadvertently hurt anyone's sentiment. We had already withdrawn these packs from the market last year. We thank you for your understanding and support,' said a Nestle spokesperson.

According to the company, these were travel packs meant to celebrate beautiful local destinations.

Nestle, which owns brands such as Maggi, Nescafe, Milkmaid, Munch and Milkibar, said it wanted to celebrate the culture of Odisha with designs on packs representing 'Pattachitra'.

'Last year, we wanted to celebrate the culture of Odisha with designs on packs representing 'Pattachitra', an art form uniquely identifiable by its vivid imagery. We wanted to encourage people to know about the art and its artisans. Our past campaigns have also shown that consumers like to collect and keep such beautiful designs,' it said.

Pattachitra is an ancient Odisha-based artworks of cloth-based scroll painting.

This artform is known for its intricate details as well as mythological narratives and folktales inscribed in it.

It was originally created for ritual use and as souvenirs for pilgrims to Puri, as well as other temples in Odisha.

Nestle India has nine production facilities with a turnover of Rs 13,350 crore in 2021.

Last year in April, Nestle India had also apologised for wrongly depicting Manipur's Keibul Lamjao National Park to be located in Meghalaya on the packaging of its KitKat chocolate after objection by authorities from the state government.

The packaging of the particular batch of the KitKat travel break chocolate had also displayed a picture of a Red Panda, a species which is not found at the Keibul Lamjao National Park.