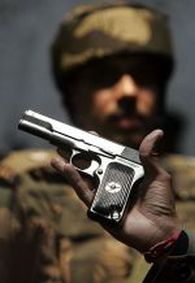 Officials of India and Nepal on Saturday discussed security issues and cross-border crime during the home-secretary level talks here as New Delhi expects Kathmandu to address its concerns.

India has previously expressed concern over the emergence of new routes for infiltration into the country through the porous Nepal border.

Among other issues, capacity-building of Nepalese security agencies and establishment of a police academy in Nepal with Indian cooperation also came up during the meeting.

Akhilesh Mishra, Joint Secretary (North) and Indian Ambassador to Nepal Jayanta Prasad were also present during the talks which extended into the evening.

The last home secretary-level talks between Nepal and India were held in New Delhi in January 2012.

The 13-member Indian delegation led by Singh arrived on Saturday and will also visit Pokhara, the tourist hub of western Nepal on Sunday before wrapping up the two-day visit, officials said.