Former Punjab chief minister Amarinder Singh on Tuesday resigned from the Congress and announced the name of his party -- Punjab Lok Congress -- just months before the Assembly polls. 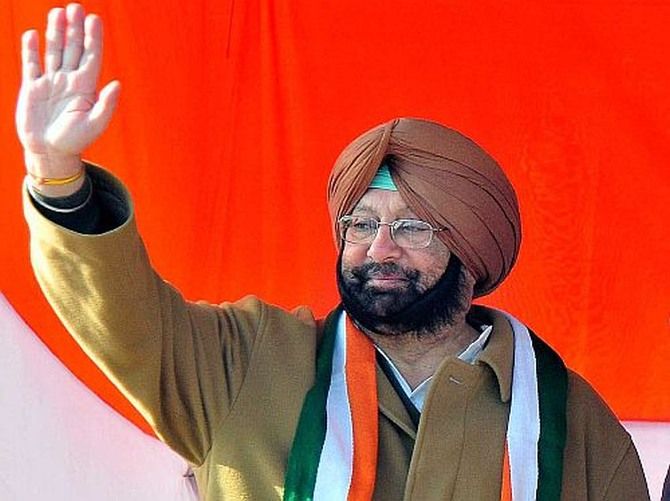 The party will be formally launched later and the Election Commission has no objection to its name, he said.

The move by the former CM came days after he dismissed reports of back-end talks with the Congress, saying the time for rapprochement is over.

In his seven-page resignation letter, Amarinder Singh also slammed the Gandhis for a "conspiracy" to oust him from the state government.

In the letter to Congress president Sonia Gandhi, he listed out his achievements as chief minister.

Amarinder Singh had resigned as the Punjab CM after a bitter power tussle with Sidhu.

In the letter, he told Sonia Gandhi that despite knowing him "for the better part of his 52 years in public life" and "that too at a deeply personal level", she never "understood" him or his "character".

"You thought I was getting on in years and should be put to pasture. I am neither tired nor retired. I feel I have a lot to give and contribute to my beloved Punjab. I intend to soldier on and not fade away," wrote Singh.

Expressing his anguish over Sidhu being given the charge of the Punjab Congress chief, he said, "Despite my profound reservations and over the unanimous advice of almost all MPs from Punjab, you chose to appoint an acolyte of the Pakistani deep state Navjot Sidhu who had publicly hugged the Pakistan Army chief Gen Bajwa and Prime Minister Imran Khan."

"Khan and Bajwa are the people responsible for sending terrorists across the border to kill Indians," he said.

Hitting out at the former cricketer, he said, "Sidhu's only claim to fame was that he would abuse me and my government on a regular basis. I am old enough to be his father but that did not stop him from using the filthiest and most vile language against me both publicly and privately."

"Unfortunately, rather than being reined in, he was patronised by Rahul and Priyanka, while you chose to turn a blind eye to the shenanigans of this gentleman who was aided and abetted by the general secretary in-charge Harish Rawat, perhaps the most dubious individual I had the occasion to make acquaintance off," he wrote.

On the Congress Legislative Party meeting which was called before his resignation, he said a "midnight conspiracy" was carried out against his at the behest of Sonia and her children.

"It was my prerogative as the CLP leader to have called the meeting if the AICC desired it. It was only early next morning that a colleague informed me that such an outrageous act has been committed," he wrote.

"You called me at 10.15 am next morning and asked me to resign. I did so without batting even an eyelid. However, the crude manner in which the whole operation was executed by the undertakers of the AICC left a very foul taste in the mouth," he wrote.

"I actually felt deeply hurt by your conduct and that of your children who I still deeply love as much as my own children, having known their father, since we were in school together since 1954, which is for 67 years now," Singh wrote.

The former CM said he hoped that no other senior Congressperson is subjected to the "ignominy" that he was put through in the last few months.

"I hereby tender my resignation from the Indian National Congress in the interest of my state and my country," he wrote.

After announcing the name of his party, he said the registration of the party is pending approval with the Election Commission of India.

The Election Commission has no objection to the proposed name, Punjab Lok Congress, he said.

He said the Election Commission had given three symbols from which one was to be chosen.

He said his party had also submitted three different symbols and the final symbol would be chosen from a set of six, three suggested by the commission and three proposed by the party.

The party will be formally launched later, he said in a statement here.

The policies, programmes, agenda and vision will be spelt out at the time of the launch of the party, he said.