Hours before he was to appear for the National Eligibility-cum-Entrance Test for a third time, a 19-year old youth belonging to a village near Salem died by suicide on Sunday, fearing the outcome of the test he was to take. The death led to a blame game with the AIADMK holding the DMK regime responsible and the state government targeting the Centre.

Expressing shock and grief, chief minister M K Stalin said that the aspirant, Dhanush, died by suicide as he was dejected that he could not clear the exam despite appearing twice earlier and due to the adverse effects caused by NEET to poor students of urban and rural regions.

While the main opposition AIADMK squarely blamed the DMK regime for his death, Stalin targeted the Centre for being "obstinate" on the matter and assured passing a bill in the assembly on September 13 to "permanently exempt" Tamil Nadu from the ambit of NEET.

The Centre does not understand the huge difficulties caused by NEET to students and its 'negligence' and 'obstinacy' continues to be responsible for the death of students by suicide, the chief minister alleged.

Condoling the aspirant's death, Stalin said "our legal struggle against NEET starts now after taking over the reins of the government."

The state government has the responsibility and duty to build a good future for students and realising this, "our struggle will continue till the Union government rescinds NEET," he said.

The chief minister said his government would drum up support of all other states on this issue by reaching out to all chief ministers, adding, "I have the confidence that we will win."

Also, "irregularity in conduct of NEET, leak of question paper, several instances of fraud, including impersonation and students' suicides" has not prompted the Centre to have a change of heart, further reinforcing the necessity of having education in the state list of the Constitution, Stalin said.

He appealed to the student community not to lose heart and not take any extreme step.

A Mettur range police officer told PTI that the boy was found hanging in his house by his mother at about 3.45 AM and the family informed them.

Asked if any suicide note was found, the police officer declined to specify. He said that the boy was to appear for the national test for the third time after having failed to clear the test in two previous attempts.

The body of the boy, Dhanush who belonged to Koozhaiyur village near Mettur, was handed over to the family after post-mortem at a hospital.

A large number of people gathered near his house and his death by suicide led to tense moments in the village, police said.

Leader of the Opposition K Palaniswami said the DMK had, in the run up to the April 6 Assembly polls, claimed that the party was aware of the ways and means to "cancel NEET."

The former chief minister said the DMK targeted the AIADMK government over this issue, "diverted the people and also won the polls."

The DMK made 'tall claims' of exempting Tamil Nadu from NEET, mocked at AIADMK over this matter and campaigned in a way that deceived the student community over NEET and the end result was the death of one more student by suicide, Palaniswami, who is the AIADMK co-coordinator, a top party position, said in a statement.

Dhanush, who took the extreme step, believed the "claims of political leaders" and was not "fully prepared," the AIADMK leader claimed, adding that the boy did so fearing that his dream of becoming a doctor would be shattered if he failed to clear the test, the third time too.

Requesting aspirants not to take extreme steps over any issue, Palaniswami said the boy's life could have been saved had the government clarified on time whether the exam would be held or not in Tamil Nadu and if it had arranged proper coaching for aspirants.

The AIADMK leader said he had time and again asked the government to clarify whether NEET would be conducted or not in Tamil Nadu since the DMK had made such an assurance.

Unlike the DMK, his party is not interested in politicising the NEET issue, the AIADMK leader said.

"Please tell the students about the true status of NEET," he said and demanded a solatium of Rs one crore for the aspirant's family.

Palaniswami also visited the bereaved family and paid homage by placing a wreath.

PMK founder leader S Ramadoss said NEET went against social justice and must be rescinded immediately. "At the same time, suicide is not the solution for this problem," he tweeted and urged students not to take the extreme step since there are several other educational programmes to serve the people.

Dhanush is the second son of Sivakumar, a farmer of Salem district.

Over the years, a number of aspirants from Tamil Nadu had died by suicide fearing the outcome of the national test and opposition to NEET grew manifold.

Days ago, the Tamil Nadu government had in a policy note stated that an official committee suggested enactment of a fresh law to provide for admission to professional degrees like medicine on the basis of marks obtained in the qualifying exam and to get exemption from NEET.

Bills adopted in 2017 during the previous AIADMK regime to exempt Tamil Nadu from NEET did not get the President's assent. 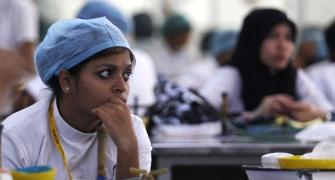 Why are exams destroying our children? 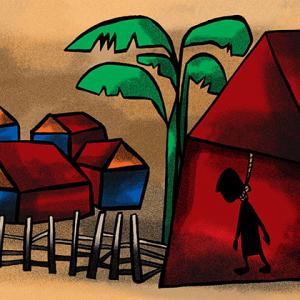