Taking a dig at the Bharatiya Janata Party over its oldest ally Shiromani Akali Dal breaking ties with it on the farm bills issue, senior Congress leader Kapil Sibal on Thursday said the saffron party's alliance politics was "falling apart" over legislations and the ruling National Democratic Alliance has turned into a "non-democratic alliance". 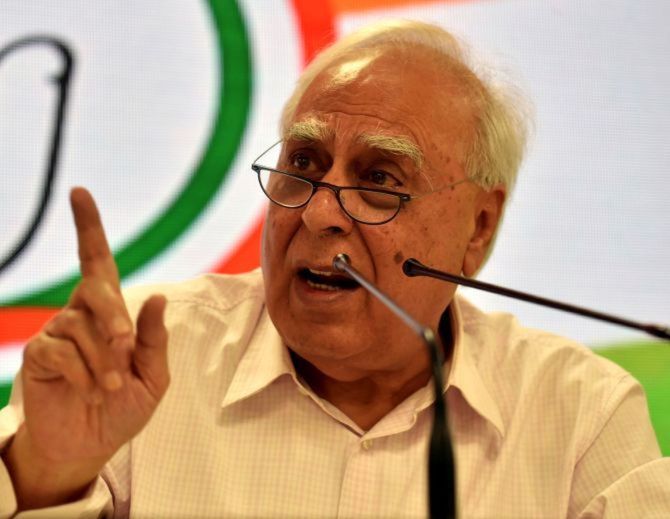 Sibal, who was among the 23 leaders who wrote to Congress chief Sonia Gandhi calling for organisational reforms, also slammed Union minister Nirmala Sitharaman for recently alluding to the letter writers and their alleged undermining of the party, saying, "The Congress still has space for people to express concerns, while the BJP has no such space".

Sibal alleged that the BJP got the farm bills passed while riding "roughshod over the Opposition and (its own) allies".

"The Shiromani Akali Dal, probably the oldest alliance partner of the BJP, has broken away sensing the disquiet in the farming community and now Dushyant Chautala is feeling the heat of continuing with the BJP-led government in Haryana," the former Union minister said.

The BJP's "politics of alliance is falling apart" over the farm bills issue and the NDA has become a "non-democratic alliance", Sibal told PTI in an interview.

"Farmers are out on streets not only because of what the Congress is saying but because they feel strongly about the possibility of losing out on getting the MSP (minimum support price)," he said.

Sibal said the BJP always tries to gain a foothold in states where its presence is limited and afterward "dumps" its allies.

"When they realise that they have gained a foothold, they are brazen enough to tell their alliance partners that 'we don't need you now'. That is why the Shiv Sena broke away and that is why the SAD broke away," Sibal said.

"Sukhbir Singh Badal said there is no consultation (in the NDA). So there is no NDA, there is only the BJP sitting over the NDA and lording over it," he alleged, also pointing to the seat-sharing issues NDA is facing in Bihar.

The BJP is in alliance with the JD(U) in Bihar as a matter of "compulsion" and my prediction is that in future they will "dump" the Janata Dal-United, Sibal said.

Asked about Sitharaman's remarks in a recent newspaper interview alluding to the 23 letter writers and implying an alleged undermining of Rajya Sabha Leader of Opposition Ghulam Nabi Azad by the Congress, Sibal said, "She understands undermining of roles better than we do because the PM has undermined everyone in the Cabinet".

"While a party like the Congress still has space for some people to express their concerns, the BJP has no such space," he asserted.

Sibal said the three farm bills were like the government's decisions of demonetisation and "faulty" implementation of GST and would harm farmers' interests.

"Our worry, as well as the reaction of farmers both in Haryana and Punjab, is that they will not get the MSP because private players, through contract farming, will ensure that the farmers are deprived of the MSP," he said.

He dared Sitharaman to give an assurance in Parliament that the farmers will get what the prime minister assured as their "cost plus 50 per cent", or else she would resign.

"The proof of the pudding is in the eating. It is all very well to enunciate breakthrough political decisions without realising that you do not have the intention or the wherewithal to actually ensure that the farmers get their due," he said.

Sibal said the legislations needed broader consultation and should have been sent to a select or standing parliamentary committee so that adequate safeguards for MSP could have been introduced.

The three bills, after their passage in the recently concluded monsoon session of Parliament, have now become laws after President's assent but protests are continuing in various parts of the country.

The government presented these bills as pro-farmers, saying these will ensure that farmers get better prices for their produce and do not get subjected to regulations of 'mandis'. It has also said that farmers will be now free to sell their produce to anyone and these legislations will increase competition and promote private investment, which will help in the development of farm infrastructure and generate employment.

However, opposition parties have slammed the bills as "anti-farmers", claiming that the agriculture sector will be left to the fate of corporate interests.

On Sithraman's statement that Congress is moving to the fringe, Sibal said she understands "fringe elements" much better than the Congress party "especially since fringe elements entered the JNU under her gaze."

"She also understands the presence of fringe elements in Parliament, and therefore her obsession with fringe elements is part of the DNA of the BJP. The Congress is fighting these fringe elements and will continue to fight to ensure that the ethos of our constitution prevails," he said.