The Bharatiya Janata Party's ally National People's Party leader Agatha Sangma on Sunday demanded the repeal of the Citizenship (Amendment) Act at a meeting of constituents of the ruling National Democratic Alliance as well as at the all-party meeting convened ahead of the Winter Session of Parliament. 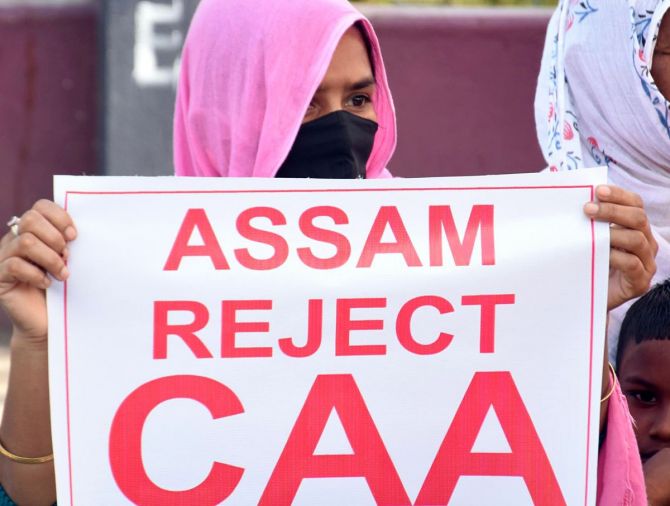 Sangma, the MP from Tura in Meghalaya, urged the government that as it has repealed farm laws keeping in mind the sentiments of the people, the CAA should also be repealed.

Sangma made the demand at the all-party meeting called by the government as well as at a meeting of the BJP-led NDA in the presence of Defence Minister Rajnath Singh and Union ministers Pralhad Joshi and Piyush Goyal.

There was no response from the government but it has taken detail notes of the demands made by the floor leaders of all parties, Sangma said.

The CAA, which facilitates granting of Indian citizenship to persecuted non-Muslim minorities of Pakistan, Bangladesh and Afghanistan, was passed by Parliament in 2019 and had led to protests in different parts of the country.

The President had given his assent to the legislation on December 12, 2019.

The objective of the CAA is to grant Indian citizenship to persecuted minorities -- Hindu, Sikh, Jain, Buddhist, Parsi and Christian -- from Pakistan, Bangladesh and Afghanistan.

People from these communities who had come to India till December 31, 2014 due to religious persecution in these countries will not be treated as illegal immigrants but be given Indian citizenship.

After the CAA was passed by Parliament, widespread protests were witnessed in the country.

Those opposing the CAA contend that it discriminates on the basis of religion and violates the Constitution.

They also allege that the CAA along with the National Register of Citizens is intended to target the Muslim community in India.