Rebel Shiv Sena MLA Mahesh Shinde from Satara district in Maharashtra on Saturday said the Nationalist Congress Party, one of the three constituents of the ruling Maha Vikas Aghadi, had stabbed his party in the back and that he and others had raised the issue with Chief Minister Uddhav Thackeray without success. 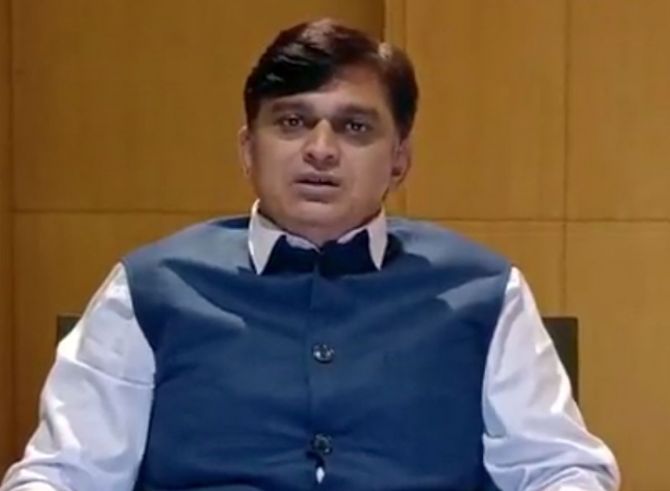 Shinde, legislator from Koregaon seat, is currently in Guwahati with Eknath Shinde, who is leading a rebellion against Thackeray since June 21, his main demand being that the party withdraw from the MVA, which also comprises the NCP and the Congress.

"During a meeting with Chief Minister saheb at Varsha bungalow in presence of some officials, we sought details about the funds allocated to our constituencies. The officials gave wrong numbers about the funds. The CM was surprised when we told him about the real figures," he said in the recorded message.

"The CM told officials they and NCP leaders had betrayed the party. But despite this, no change was witnessed thereafter. While Shiv Sena MLAs were given funds worth Rs 50 to 55 crore for their constituencies, NCP MLAs received Rs 700 crore to Rs 800 crore," Shinde alleged.

He said NCP MLAs, who were earlier defeated by Sena leaders, were given more funds and many legislators from the Uddhav-led party were not invited for official functions.

"We had three meetings with the CM, who assured us there will be improvement (in the allocation of funds ). He had given 'stays' on several things but the deputy chief minister did not acknowledge such stay orders. On the contrary, the CM's stay orders were thrown into the dustbin and developments works of our opponents were given priority," he claimed.

Shinde said Maharashtra NCP chief Jayant Patil would visit constituencies of Sena MLAs and openly claim the future legislator from the region would be from his party and not the Sena.

"We were apprising the CM on such issues and he assured us these would stop but in vain. In such a situation, it was difficult for us to work. The NCP, while talking about the MVA staying united, was actually stabbing the Shiv Sena in the back," Shinde said.

It was due to this anger over the NCP's role that disgruntled legislators assembled under the leadership of Eknath Shinde, the Koregaon MLA said.