Concerned over the rising Maoists rampage, Home Minister P Chidambaram has written to Chief Ministers of Bihar, Jharkhand and West Bengal inviting them for a meeting in New Delhi to be assured that they are "on the same page" with the Centre before the launch of inter-state operations against the Naxals.

In letters written to Bihar Chief Minister Nitish Kumar and Jharkhand Chief Minister Shibhu Soren, both of whom skipped a meeting in Kolkata on February 9, and to their West Bengal counterpart Buddhadeb Bhattacharjee, Chidambaram has said that the Central government has reached some "tentative conclusions" on tackling the menace.

"You will kindly appreciate that before the tentative conclusions are translated into decisions and implemented, it is necessary to be assured that the governments of both West Bengal and Jharkhand fully endorse the plan," he said in his letter to Bhattacharjee, copies of which have been accessed by PTI.

West Bengal witnessed the worst attack by Maoists from Jharkhand on a police camp (Eastern Frontier Rifles) at Silda in West Midnapore early this week in which 24 jawans were killed.  In the other attack during the week, Maoists killed 11 villagers in Kodasi Phulwaria village in Jamui District in Bihar.

Sources close to Chidambaram said for the BJP, which took a tough stand on Naxalism in its National Council meeting in Indore and is a partner in the governments in Bihar and

Jharkhand, it is an acid test -- whether it will enforce a tough line or would toe the perceived "soft line" by the dominant partners in the two states.

In Jharkhand too, the naxalites are on the rampage. A few days ago they kidnapped a revenue official, who was released on Friday after extracting a price from the state government.

In the Febraury 9 meeting, Bihar was represented by its Home secretary and the DGP while Jharkhand deputed its two deputy Chief Ministers and senior officers. Both the states presented their cases and sought more para-military forces and other assistance from the Centre.

The Naxal Management Division of the Union Home ministry examined the plans of the two states and is said to be ready with its response.

However, the sources said, Chidambaram wants to be reassured that the two chief ministers fully endorse the plans presented by their officials and are on the same page as the central government.

He is said to be of the feeling that without a clear commitment by the two chief ministers it would not be possible to implement the plans for inter-state operations.

In his letter to Bhatacharjee, he has requested him to visit Delhi once the date of the visit of the Jharkhand chief minister is finalised.

In his letter to Kumar, Chidambaram expressed his deep sense of shock and grief over the attack by Maoists in Jamui district.

"It is regrettable that the attack could not be thwarted despite specific intelligence shared by central agencies with the Additional Director General of Police (Special Branch), Bihar," he said.

The Home minister recalled that Kumar had expressed his inability to attend the Kolkata meeting, which was convened mainly to discuss inter-state operations.

"Your officers presented a case for inter-state operations on the Bihar-Jharkhand border.  They also sought additional Central forces and other assistance for intra-state operations in Bihar. We have since examined these requests and reached certain tentative conclusions.

"You will kindly appreciate that before the tentative conclusions are translated into decisions and implemented, it is necessary to be assured that your government fully endorses the plan presented by the Home Secretary/DGP of Bihar.

"It is also necessary to be assured that the state governments (of Bihar and Jharkhand) and the Centre are on the same page before commencing the inter-state operations on Bihar-Jharkhand border.

"Hence, I invite you to visit Delhi with your senior officers as early as possible so that we may follow up on the Kolkata meeting and formulate a plan of action," the minister said.

"You will kindly appreciate that before the tentative conclusions are translated into decisions and implemented, it is necessary to be assured that your government endorses the plan presented by the DGP, Jharkhand.

To Bhattarchjee, the Home minister expressed his deep sense of shock and grief over the attack on the EFR camp and noted that he has ordered an inquiry into the incident.

"Obviously, there were serious lapses and the matter must be thoroughly inquired into," he said. 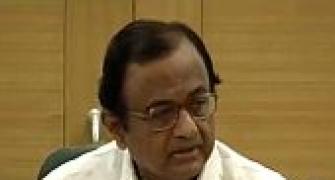 I wasn't told in time about Naxal meeting: Nitish

Bihar: Excise minister gets the boot