Chief of Naval Staff Admiral Karambir Singh on Thursday addressed a select group of combatants of the Navy's Carrier Battle Group over a broadcast from the INS Vikramaditya, India's only aircraft carrier, and reviewed the force's overall combat readiness, officials said. 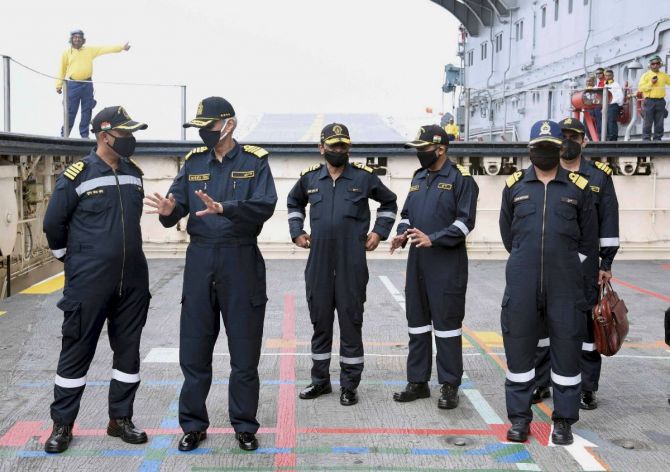 In his remarks, Admiral Singh complimented his force for continuously maintaining 'peak combat-readiness' and 'high tempo' of operations over the past few months, they said.

The Indian Navy has significantly increased its deployment in the Indian Ocean Region, in an attempt to send across a message to China in the wake of escalation in tension between the two countries over the border row in eastern Ladakh.

Giving an overview of the prevailing security situation, the Chief of Naval Staff stated that the Navy would continue to maintain a high-tempo of operations in the coming months.

'He also complimented the Carrier Battle Group and its combatants for accurate and effective weapon firings, which left no doubt about the Navy's readiness to meet any emergent contingencies,' the Navy said in a statement.

A carrier battle group is a mega naval fleet comprising an aircraft carrier, accompanied by a large number destroyers, frigates and other ships.

Admiral Singh highlighted that tri-service synergy and coordination has peaked with establishment of the Department of Military Affairs as was visibly demonstrated in the joint response of the three services to recent events, in an oblique reference to India's response to the border row.

In a mega reform initiative, the government on December 31 last year appointed Gen Bipin Rawat as the country's first Chief of Defence Staff and created the Department of Military Affairs with an aim to bring in convergence in functioning of the three services.

'The Indian Navy has remained mission-deployed and combat-ready across the Indian Ocean Region, even through rough seas during the monsoon period, towards maintaining the maritime security of the nation,' the Navy said.

Admiral Karambir Singh, the Chief of the Naval Staff (CNS), reviewed the operational preparedness and combat-readiness of the Indian Navy's principal combatants on 22 October 2020.

Earlier, Admiral Singh, accompanied by Flag Officer Commanding-in-Chief of Western Naval Command Vice Admiral Ajit Kumar, arrived at Karwar naval base in Karnataka where he interacted with the Navy personnel deployed there.

During the interaction, he emphasised on various operational aspects including key issues relating to cyber-security, protection against terror attacks, asymmetric warfare, and exhorted all personnel to maintain the highest-level of alertness, officials said.

On embarking on indigenous guided-missile destroyer Chennai, he was given a briefing by the Fleet Commander, after which weapon firings, air-to-air combat operations, anti-submarine drills and fleet manoeuvres were demonstrated, the Navy said.

Following the drill, the Chief of Naval Staff embarked on a fleet support ship Deepak and interacted with the ship's crew.

Then he embarked on INS Vikramaditya where he witnessed the Carrier Battle Group's capabilities for air defence as well as strike missions.

In his address, Admiral Singh, also advised continued compliance of protocols by naval personnel and their families to deal with the COVID-19 pandemic.

'Indian Navy continues to maintain a high tempo of operations and combat-readiness despite the COVID-19 pandemic by adhering to stringent protocols onboard warships, submarines and aircraft squadrons and bases, and is fully prepared to tackle challenges in the maritime domain,' the Navy said. 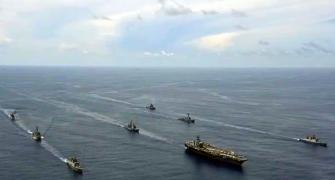 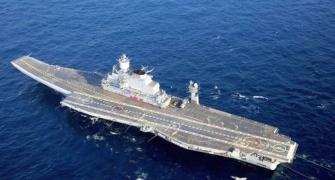 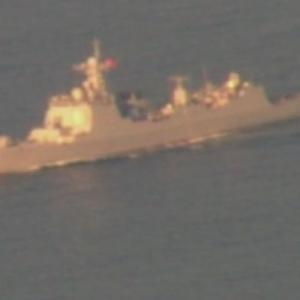 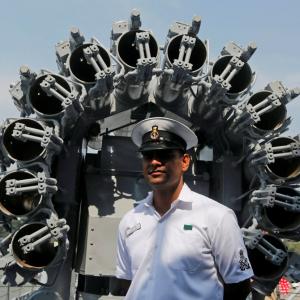