Student activists Natasha Narwal, Devangana Kalita and Asif Iqbal Tanha walked out of Tihar Jail in New Delhi on Thursday evening after they were granted bail in the northeast Delhi riots conspiracy case, and vowed to continue their struggle. 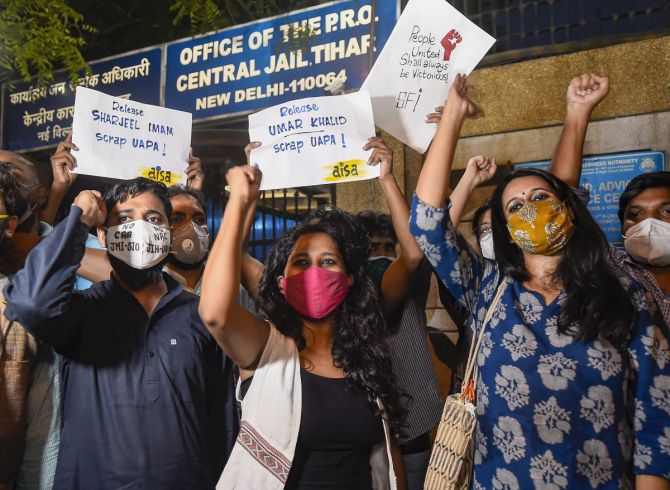 The release of the trio, arrested in May last year under the stringent Unlawful Activities (Prevention) Act (UAPA), came after a lower court order.

Their friends and family members had gathered outside the jail before their release.

Jawaharlal Nehru University students Narwal and Kalita thanked their friends and well-wishers, many of whom gathered outside the jail, for supporting them during their year-long stay behind bars.

As soon as the Pinjra Tod activist-duo walked out of Tihar, they were greeted with slogans of 'Lal Salaam', 'Natasha Zindabad', 'Devangana Zindabad'.

Slogans were also raised in memory of Natasha's father, Mahavir Narwal, who succumbed to the coronavirus last month.

Tanha walked out of a separate jail gate. The Jamia Millia Islamia student was wearing a mask, which read 'No CAA, No NRC, No NPR'.

Walking out of Tihar Jail, Tanha said he had kept hope that he would be released one day and asserted that the fight against the CAA, NRC and the NPR would continue.

Students were carrying banners demanding the release of other political prisons, including former JNU student leader Umar Khalid, and the scrapping of the UAPA, under which the trio was arrested.

"We have received tremendous support inside jail and we will continue our struggle," Narwal told reporters.

Welcoming the Delhi high court order granting them bail, Narwal, an activist of women collective Pinjra Tod, said that when they were arrested, it took them many months to believe that they were in jail under such stringent charges. 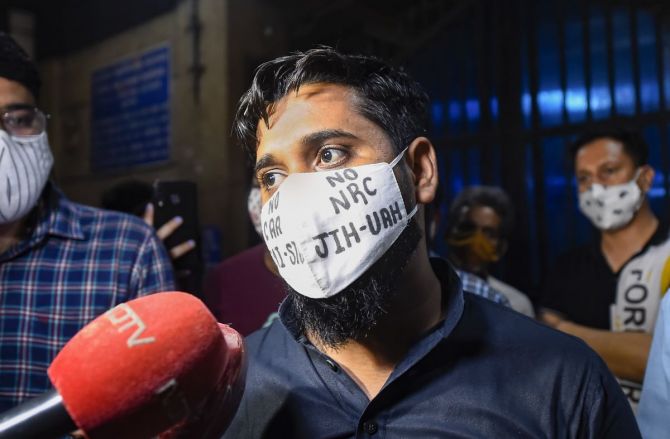 While stating that the matter is still sub-judice, Kalita said, "... we would like to thank the Delhi High Court for upholding what we believe in. Any such protest that we have done is not terrorism. It was a democratic protest, led by women."

Hitting out at the government, Kalita said people are in jail for raising their voice.

"It shows the desperation of the government... We are women who are not scared of them. They are trying to suppress the voice of people and dissent. We got a lot of support from people which helped us survive inside (jail)," she told reporters.

In a statement, Tanha said, "I want to reiterate that our fight is against the discriminatory CAA (Citizenship Amendment Act) and not against people of any faith. I am glad that the honourable court has asserted that our peaceful and democratic protests had nothing to do with the riots.

"I hope that this judgment will serve as an important precedent. We have full faith in the fairness of the judiciary. I hope that the trial takes place in a speedy manner and we all are acquitted soon."

Tanha is a member of the Students' Islamic Organisation of India.

While demanding the release of other prisoners, he also appealed to the government to address the Covid conditions in prison.

"Prisoners with shorter sentences need to be released to end overcrowding and all prisoners must immediately be vaccinated," he added.

On the delay in their release after the high court granted them bail, Kalita said it was unbelievable because they had secured bail two-three days ago.

"...still we were inside jail. I almost kept expecting that some police officers will come and arrest me," she added.

According to a senior jail official, Kalita and Narwal were released around 7 in the evening, and Tanha was let out half an hour later.

Director General (Delhi Prisons) Sandeep Goel said their release got pushed by two days over delays in verifying their addresses and sureties.

In its order for the immediate release of the trio, the Delhi court said the delay in the verification process by the police could not be a plausible reason for the accused to be kept imprisoned.

After securing bail from the high court, the activists had moved the trial court, seeking immediate release from prison.

When the trial court deferred the order on their plea for Thursday, they moved the Delhi high court, which ordered the lower court to proceed with the issue with 'promptitude and expedition'.

The three student activists were arrested in May 2020 and are accused of being the 'masterminds' of the February 2020 violence, which left 53 people dead and more than 200 injured.

The high court, while granting them bail on June 15, had observed that 'in an anxiety to suppress dissent, the state has blurred the line between right to protest and terrorist activity' and if such a mindset gains traction, it would be a 'sad day for democracy'.

The Delhi Police has, however, have moved the Supreme Court, challenging the high court judgment granting them bail in the case. 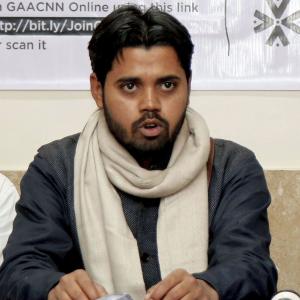