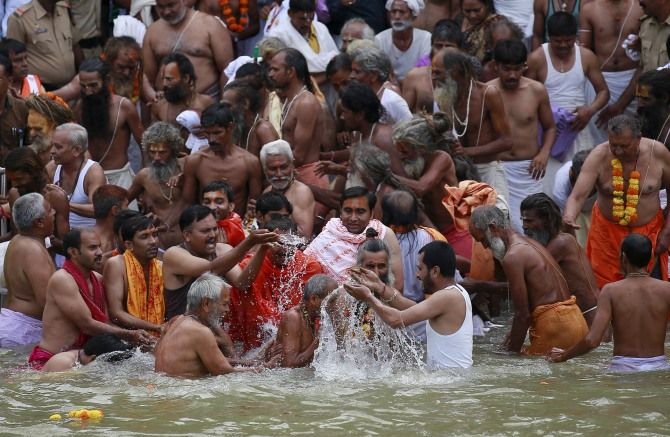 Sadhus take a dip in the Godavari river during the first "Shahi Snan" (grand bath) at the "Kumbh Mela" in Nashik. All photographs: Danish Siddiqui/Reuters

The first 'shahi snan' of the ongoing Kumbh Mela began in Nashik on Saturday with thousands of devotees, including 'mahants' of various akhadas, thronging the ghats of the River Godavari to take the holy dip.

The first akhada to take the holy dip was the Nirvani akhada, led by its mahant Gyandas Maharaj, who is also the president of the All India Akhada Parishad, who performed the ritual along with other 'sadhus' and 'mahants' at 7.15 am.

It was followed by the sadhus and mahants of the Digambar akhada, led by its mahant Krishnadas Maharaj, who took the dip in Ram kund and Ram ghat from 8.00 am onwards. 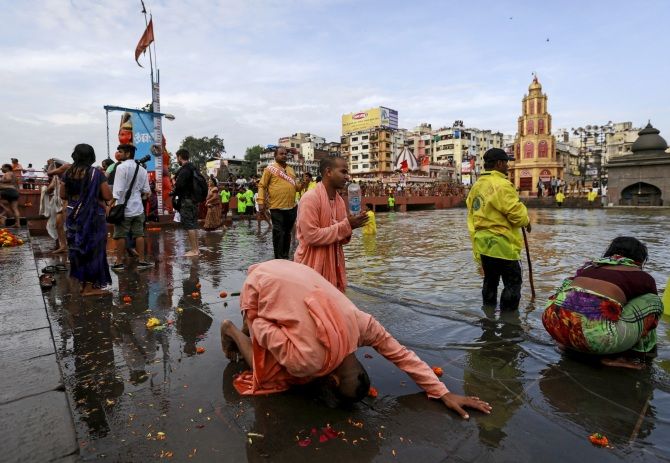 Sadhus pray along the Godavari river during the first "Shahi Snan" at the "Kumbh Mela".

The third and the last akhada to take the dip was the Nirmohi akhada, who reached the ghats at 9.30 am. The sadhus of the Chatu Sampraday akhada also took the royal bath.

Earlier, the royal processions of the three akhadas of the Vaishnava sect, comprising mahants and mahamandleshwars atop vehicles, horses and camels decorated with flowers, which began from the LaxminarayanTemple in Tapovan here, reached the Ram kund wielding flags, swords, trishul, etc, amid beating of drums. 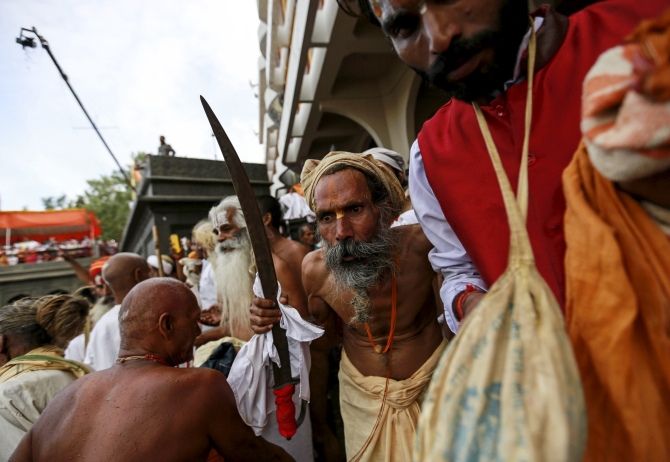 A Sadhu prepares to take a dip in the Godavari river during the first "Shahi Snan".

Mahajan also felicitated the mahants by giving them yellow scarves. 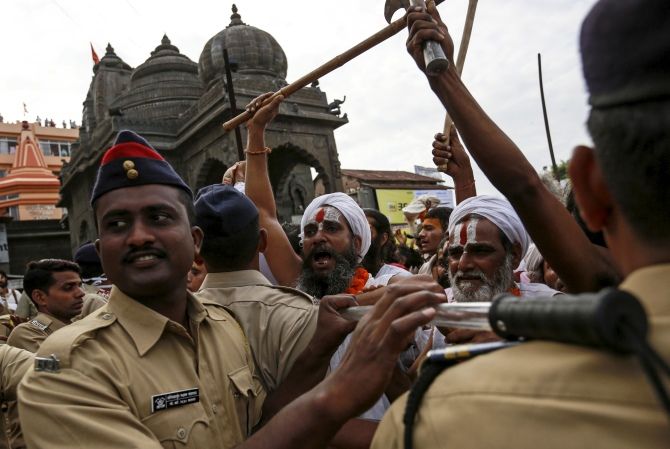 Sadhus are controlled by the police as they arrive to take a dip in the Godavari river.

The NMC and several social organisations have provided swimming experts at the Ram Kund to assist the people taking the dip. A life protection squad has also been deployed in the river water to prevent any drowning incident.

Thousands of sadhus and mahants, including Naga sadhus of the 10 akhadas of the Shaiva sect, took the royal bath at the Kushvarta Teerth in Trimbakeshwar town which received light showers. 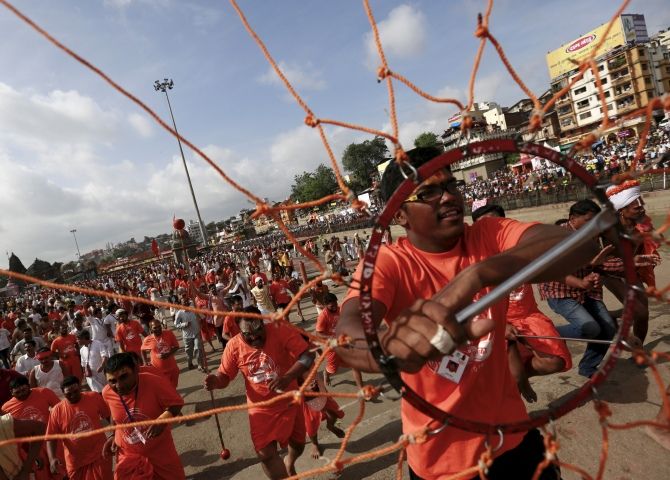 Devotees run to take a dip in the Godavari river during the first "Shahi Snan".

In Trimbakeshwar, the mahants of the Shri Pancha Dashanam Juna akhada, led by mahant Harigiri Maharaj, who is also general secretary of the All India Shaddarshan akhada, took the first royal bath at 4.15 am.

The police have made tight security arrangements by deploying extra forces in the two towns and all basic amenities for the devotees have been ensured.