Furious with division being created on the basis of religion: Naseeruddin Shah

Veteran actor Naseeruddin Shah has expressed concerns over the divide being created in the country between Hindus and Muslims in the name of love jihad. 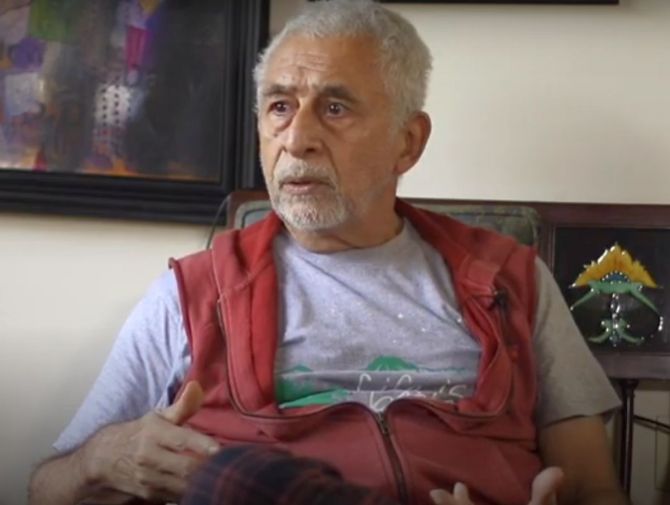 The 70-year-old actor made the comments in a video interview with Karwan-e-Mohabbat India, shared on its YouTube channel on Sunday.

"I am really furious with the way divisions are being created, like the love jihad tamasha in UP. Firstly, the people who coined this phrase don't know the meaning of the word jihad.

"I don't think that anyone would be so stupid to actually believe that Muslims will overtake the Hindu population, it is unimaginable. For that, Muslims will have to have so many babies. So, this whole notion is unreal,” Shah said in the interview.

Last year in November, Uttar Pradesh became the first state in India to pass an ordinance against forcible or "dishonest" religious conversions.

In the last few months, states like Haryana and Madhya Pradesh have also revealed plans to enact laws to counter alleged attempts to convert Hindu women to Islam in the guise of marriage, which political leaders often refer to as "love jihad".

The Bandish Bandits actor believes the term "love jihad" stems from the idea of stigmatising inter-faith marriages and stop social interactions between Hindus and Muslims.

"They not only want to discourage inter-faith marriages but also curtail social interactions between Hindus and Muslims," he added.

Shah, who is married to theatre-film actor Ratna Pathak Shah, said he always believed that his marriage to a Hindu woman would set a "healthy precedent".

"We have taught our children about every religion. But we have never told them that they belong to any particular religion. I always believed that these differences would slowly fade away. I believed that my marriage to a Hindu woman would set a healthy precedent. I don't think this is wrong," he said.

The actor said when he was about to tie the knot with the Ratna Pathak Shah, his mother had asked if he would want his would-be wife to convert to his religion and his answer was no.

Shah said even though his mother was uneducated and was brought up in an orthodox household, she was completely against the idea of changing one's religion.

"My mother who was uneducated, brought up in an orthodox household, prayed five times a day, observed Roza all her life, went for the Haj pilgrimage, she said, 'The things that have been taught to you in your childhood how can that change? It is not right to change one's religion'," he said.

The critically-acclaimed performer said he feels saddened to see the harassment young couples are facing these days in the name of "love jihad".

"This is not the world I had dreamt of,” he added.

In a 2018 interview with Karwan-e-Mohabbat, Shah had said that at many places the death of a cow is being given more importance than the killing of a policeman.

The veteran actor had also expressed anxiety over the well-being of his children, who he said have not been brought up as followers of any particular religion.

Soon after the interview was released online, the actor's remark evoked outrage among some social media users.

In the new interview, Shah said he failed to understand the reason behind such an adverse reaction to his statement.

“All I had said was that the death of a cow had taken precedence over the death of a person and it makes me very angry. This was misinterpreted that I was expressing fear, when in fact I never used the word fear.

"I have repeatedly said that I am not afraid. I am angry. Why should I be afraid? I am in my own country; I am at my own home. Five generations of my family are buried in this land. My ancestors have been living here for the last three hundred years. If this doesn't make me a Hindustani, then what does?” he asked.

The actor said it has become difficult for a person to share their views publicly due to fear of instant backlash.

"The difficult part is there is no possibility of (freely) exchanging ideas anymore. If you say anything, even in support of the nation, you are accused instantly,” Shah added.