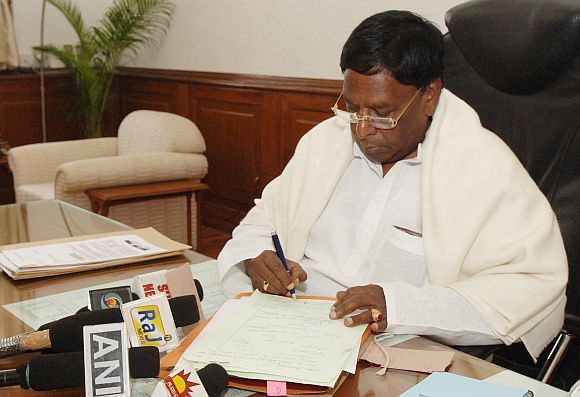 He was elected leader of the 15-member Congress legislature party on Saturday. The party also has support of two-member Dravida Munnetra Kazhagam in the 30-member assembly.

After meeting Bedi at Raj Nivas, Narayanasamy said he had submitted a letter to the LG regarding his unanimous election as Congress legislature party leader and requested her to invite him to form the government.

He said he also presented the letter of support from the DMK to the Lieutenant Governor.

Narayanasamy had on Sunday called on DMK president M Karunanidhi at Chennai and obtained the Dravidian party's letter of support for forming the government.

Narayanasamy said he along with Puducherry PCC president Namassivayam would go to New Delhi later in the day and meet AICC president Sonia Gandhi and party vice president Rahul Gandhi.

"Very soon the new government would be formed", he said.

69-year-old Narayanasamy, who had served as Minister of State in the Prime Minister's Office in the second United Progressive Alliance government after being MoS, Parliamentary Affairs, in UPA-I, did not contest the May 16 assembly polls and will now have to seek election to the legislature in a bypoll.

A law graduate, Narayanasamy did legal practice for more than 10 years and jumped into active politics in 1985.

He was a member of Rajya Sabha for three terms.