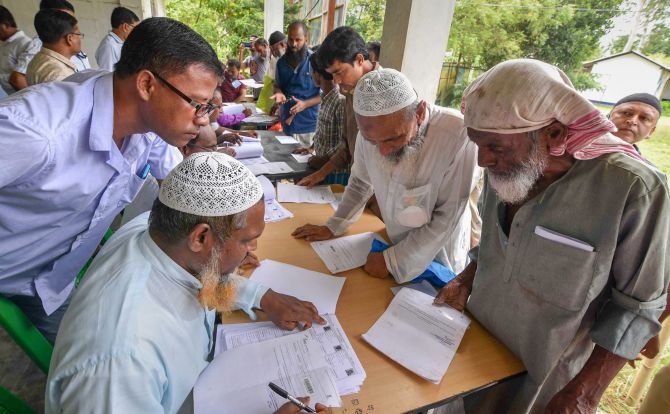 A complete National Register of Citizens list comprising names of all the included and excluded 3.30 crore applicants as per draft NRC and supplementary list of inclusions and exclusions (final NRC) were published online on Saturday.

The list will be available only online and has been published in English and Assamese language.

The exclusion certificates required for filing appeals in the Foreigners' Tribunals are, however, yet to be issued, sources in the office of the NRC State Coordinator said in Guwahati.

The final NRC, which was published on August 31 consisted only of supplementary lists.

Names of all members of a family irrespective of their involvement in the claims and objections process have been published, the official said.

The exclusion certificates are being collected from the various NRC Seva Kendras and will be made available to the public at the earliest so that they can file appeals, the official said.

The time period for issuing exclusion certificates will be announced soon, he said.

Queries are being received about the availability of the certified copies of rejection from final NRC.

The people are aware that hearings were held at various venues away from their designated NRC Seva Kendras and the process of collection of these certificates are going on, the official added.

The appeal against exclusion from the NRC must be filed in the Foreigners' Tribunals within 120 days of the publication of final NRC.

The process of NRC Update was started in Assam following a Supreme Court order in 2013 and since then, the apex court had closely monitored the entire process.

The process of receipt of NRC application forms started in May 2015 and ended on 31st August 2015.

The particulars submitted by the applicants were taken up for scrutiny to determine eligibility of their inclusion in NRC, he said.

Adequate opportunity of being heard has been given to all persons at every stage of the process, Hajela said.

The entire process was conducted as per statutory provisions and due procedure was followed at every stage, he said.

As per the Supreme Court orders, the draft NRC (complete draft) was published on July 30, 2018 wherein 2,89,83,677 numbers of persons were found eligible for inclusion.

Thereafter, claims were received from 36,26,630 numbers of persons against exclusions.

Objections were received against inclusion of 1,87,633 persons whose names had appeared in the complete draft.

Another additional draft exclusions list was published on June 26, 2019 wherein 1,02,462 persons were excluded.

Meanwhile, the Centre has withdrawn 10,000 paramilitary personnel deployed in Assam before the publication of the final NRC, officials said on Saturday.

The decision was taken as there has been no violence in Assam ever since the NRC, which validates bona fide Indian citizens of the northeastern state, was published on August 31, they said.

A home ministry official said a decision was taken on August 19 to deploy 218 companies of paramilitary forces in Assam for maintenance of law and order situation ahead of the publication of the final NRC.

As peace continues to prevail in Assam, a review has been carried out by the ministry of home affairs on Friday on the situation in the state.

After the review, a decision has been taken to withdraw 100 companies of paramilitary forces with immediate effect, the official said.

A company of a paramilitary force comprises around 100 personnel.

The troops were directed to return to their respective bases prior to the deployment in Assam, another official said. 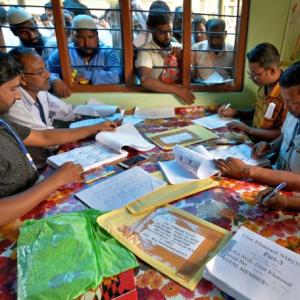 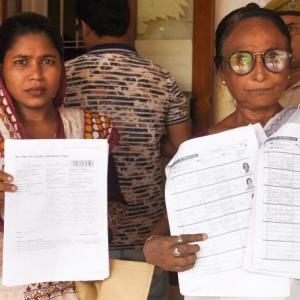