Looking forward to be with the people of India, United States President Donald Trump on Sunday left for a historic visit to the country, which officials said will 'demonstrate strong and enduring ties' between the two largest democracies of the world and significantly ramp up the defence and strategic ties.

IMAGE: US President Donald Trump and First Lady Melania Trump prepare to board Air Force One as they depart Washington for India from Joint Base Andrews in Maryland, US, on Sunday. Photograph: Alexander Drago/Reuters

Trump is accompanied by First Lady Melania, daughter Ivanka, son-in-law Jared Kushner and the top brass of his administration.

"I look forward to being with the people of India. We are going to have many millions and millions of people. It's a long trip. I get along very well with Prime Minister (Narendra) Modi. He is a friend of mine,” Trump told reporters outside the White House.

"I had committed to this trip long time ago. I look forward to it. I hear it's going to be a big event..the biggest event they ever had in India.

"That's what the Prime Minister told me. Its' the biggest event they ever had. It's going to be very exciting. I am going to be there for one night," said the US President in response to a question.

Trump's maiden visit to India is expected to significantly ramp up bilateral defence and strategic ties but unlikely to produce tangible outcome in resolving thorny issues like trade tariffs.

WATCH: President Trump speaks to media ahead of his visit to India

The nearly 36-hour-long visit by Trump is also set to send across a clear message of growing congruence of interests on major geopolitical developments in the region and beyond, particularly when China has been expanding its military might and economic clout.

'We are wheels up for India, where @realDonaldTrump & @FLOTUS have a full agenda building upon our many shared values and strategic/economic interests.

'Looking forward to a trip meant to further demonstrate the strong and enduring ties between our two countries!' the White House tweeted.

Trump will have a brief re-fuel stopover in Germany en route to India. 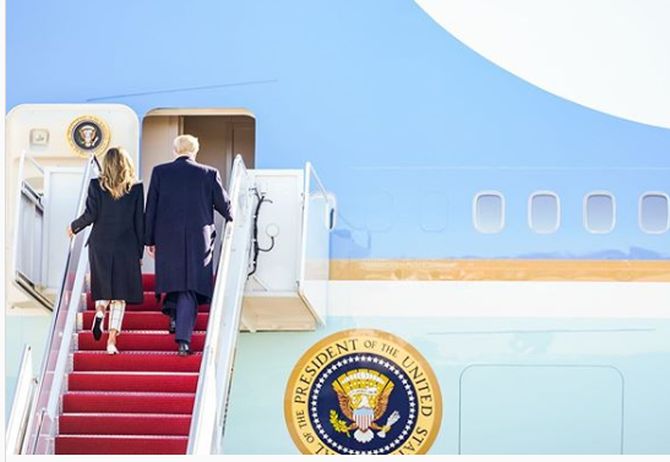 Trump, who is seeking re-election in the US presidential elections in November, will arrive on Monday around noon in Ahmedabad for the first leg of his maiden India trip during which he will visit Mahatma Gandhi's Sabarmati Ashram, take part in a roadshow with Prime Minister Narendra Modi and jointly address over one lakh people at a cricket stadium, before heading for Agra to see the iconic Taj Mahal with his wife Melania.

Prime Minister Modi is expected to receive Trump at the airport.

Trump will get a taste of India's cultural potpourri during his Gujarat itinerary which is high on symbolism, especially after the bonhomie between the two leaders at the 'Howdy, Modi!' event in Houston during the Indian prime minister's visit to the US in September 2019.

The US president, who is scheduled to arrive at the Sardar Vallabhbhai Patel International airport at around 11.40 am on Monday, will participate along with Modi in roadshows on his way from the airport to Sabarmti Ashram and from there to the newly-built Motera cricket stadium, where over one lakh people are expected to be present for the 'Namaste Trump' event.

Dance groups and singers from different parts of the country will be performing on stages that are dotting the 22-km route of the 'India roadshow' in the city that has was been spruced up for Trump's visit.

Huge billboards of the two leaders and replicas of historic places in Gujarat have also been placed along the roads where people will greet the two leaders.

Over 10,000 police personnel, besides officials of the United States Secret Service, and personnel of the National Security Guards (NSG) and the Special Protection Group (SPG) have been deployed for the high profile visit.

'India looks forward to welcoming @POTUS @realDonaldTrump. It is an honour that he will be with us tomorrow, starting with the historic programme in Ahmedabad,' tweeted Modi.

Trump, who is the seventh US president to visit India, too took to Twitter saying he was looking forward to being with his 'great friends' in India as he retweeted a video in which his face was superimposed on the hit Indian movie-character Bahubali, showing him as a great saviour.

Prime Minister Narendra Modi will accompany Trump to the Sabarmati Ashram, which was home to Mahatma Gandhi from 1917-1930 during India's freedom struggle.

"Trump will visit the 'Hriday Kunj'. If he wishes, he will spin a charkha. We will also gift him a coffee-table book, and a book containing 150 quotations of Gandhi," the Ashram official said.

Hriday Kunj is a room on the Ashram premises where Mahatma Gandhi and his wife Kasturba Gandhi had lived for 12 years between 1918 and 1930.

The official said the US President would be briefed about Gandhiji and the importance of charkha (spinning wheel) as a symbol of self-reliance. 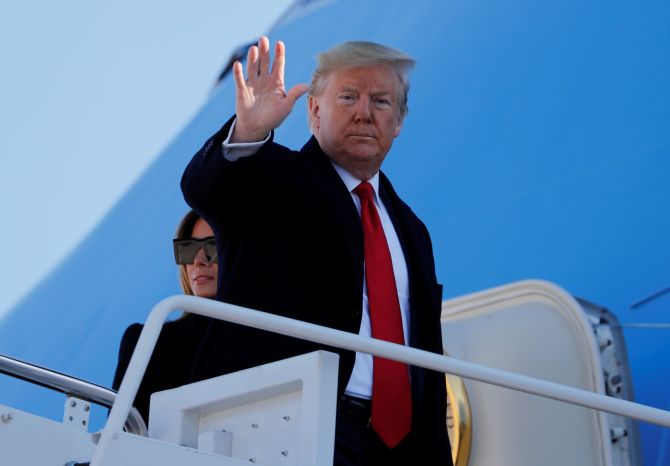 A cultural extravaganza will be organised at the Motera stadium during the 'Namaste Trump' event, where Trump and Modi will address the gathering.

Students of various government and private schools have also been roped in to perform at cultural events and they have been practising for days, an official said.

Billboard with slogans hailing Indo-US relations like 'the world's oldest democracy meets the world's largest democracy' and 'stronger friendship for a brighter future', and pictures of Trump and Modi walking together, shaking hands, and waving at the crowd during the 'Howdy Modi' event in the US last year have come up at prominent places.

The city's civic body is leaving no stone unturned to make the roadshow a memorable experience for the dignitaries as well as the people of Gujarat.

A cut-out of the 12th century 'Kirti Toran' (a pair of columns supporting an arch), from Modi's hometown Vadnagar in Gujarat's Mehsana district, has also been put up outside the Ahmedabad airport to welcome Trump.

As the city was buzzing with last-minute preparations, there were some minor hiccups.

Two makeshift VVIP entry gates erected outside the newly-built cricket stadium in Motera collapsed due to gusty winds on Sunday morning, but no one was injured in both the incidents, officials said.

Trump and his entourage will fly to Agra, which is all decked up for the visit with massive billboards and American and Indian flags displayed on all major roads.

Uttar Pradesh Governor Anandiben Patel and Chief Minister Yogi Adityanath will welcome the US president on his arrival at the Kheria airport at 4.30 pm on Monday where a group of about 350 artistes will be performing.

Huge security has been deployed across the city, especially along the nearly 13-km route to be taken by Trump's convoy from the airport to the Amarvilas hotel, and in and around the Taj.

According to the official schedule, the US president will arrive with his family at the Taj Mahal complex at 5:15 pm on Monday and spend about an hour at the famed 17th century mausoleum, built by Mughal Emperor Shah Jahan.

He will then leave for Delhi for the main leg of the visit during which restricted and delegation-level talks between Trump and Modi will be at Hyderabad House on Tuesday.

The eagerly awaited tour of India is expected to significantly ramp up bilateral defence and strategic ties but unlikely to produce tangible outcome in resolving thorny issues like trade tariffs.

The nearly 36-hour-long visit by Trump is also set to send across a clear message of growing congruence of interests on major geopolitical developments in the region and beyond, particularly when China has been expanding its military and economic clout.

As is Ahmedbad, the Agra administration has also been busy in the last few days giving the historic city a makeover, with streets spruced up, walls adorned with thematic paintings and lawns of iconic Taj Mahal beautified. 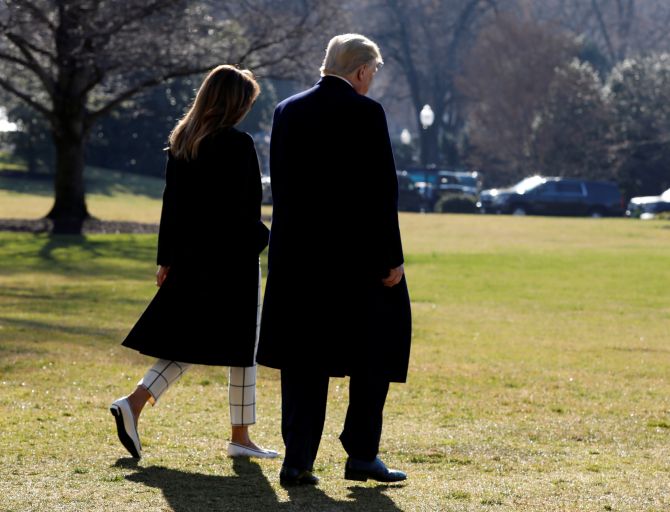 IMAGE: Trump, who is the seventh US President to visit India, took to Twitter saying he was looking forward to being with his 'great friends' in India. Photograph: Yuri Gripas/Reuters

From the Oberoi Amarvilas hotel situated near the East Gate of the Taj Mahal complex, the president, his family and members of high-level delegation accompanying him will move in eco-friendly golf carts to travel into the monument premises, officials said.

As per Supreme Court directions, petrol or diesel operated vehicles are not permitted within 500 metres of the Taj Mahal's gate.

In the main city, old roads were repaired, road-dividers painted afresh, illegal hoardings and posters removed, and walls along the route that President Trump will take decorated with painting reflecting the Brij culture and architectural heritage of Agra.

Water was being sprayed regularly to ensure there is no dust.

At the Taj Mahal premises, workers cleaned the marbles and sandstones while tourists made the most of the day as travel restrictions are to come into place in the city on Tuesday.

Water has been continuously discharged into the polluted Yamuna in the last few days to improve its environmental condition, and its banks have been cleaned of plastic and other waste.

In Taj Ganj, the area neighbouring the mausoleum, many shops are sporting uniform signboards.

"About a week ago, the boards were changed to a uniform look for all shops to present a beautiful look. We are very excited about President Trump's visit," said Pawan Kumar, who runs a sweet shop.

"The fountains have been thoroughly cleaned and flower pots are being put. Taj doesn't need any promotion, but an added spotlight will definitely enhance the glory of Taj and of Agra too," he said.

It would be followed by talks between Trump and Modi at Hyderabad House.

In the evening, the US president will meet President Ram Nath Kovind at the Rashtrapati Bhavan. A banquet will be hosted by Kovind. President Trump would depart from India later that evening.

In their talks on Tuesday, Trump and Prime Minister Narendra Modi are likely to focus on a wide variety of bilateral and regional issues including trade and investment, defence and security, counter-terrorism, energy security, religious freedom, proposed peace deal with Taliban in Afghanistan and situation in the Indo-Pacific, according to Indian and US officials.

Trump's visit to India comes at a time when the country has been witnessing wide-spread protests against a new citizenship law and strain in New Delhi's ties with Islamabad over the Kashmir issue.

Senior advisors to the President Stephen Miller, Dan Scavino, Chief of Staff to the First Lady Lindsay Reynolds, Assistant to the President and Special Representative for International Telecommunication Policy and Senior Advisor to the Chief of Staff Robert Blair, and White House Press Secretary Stephanie Grisham are the other members of the delegation.

United States Ambassador to India Ken Juster is also part of the delegation.