From Dwight D Eisenhower to Bill Clinton, many American presidents have made sure they’re photographed against the backdrop of the Taj. And, now the monument is ready to impress Trump for that family frame. Well, almost ready, reports Shreya Jai. 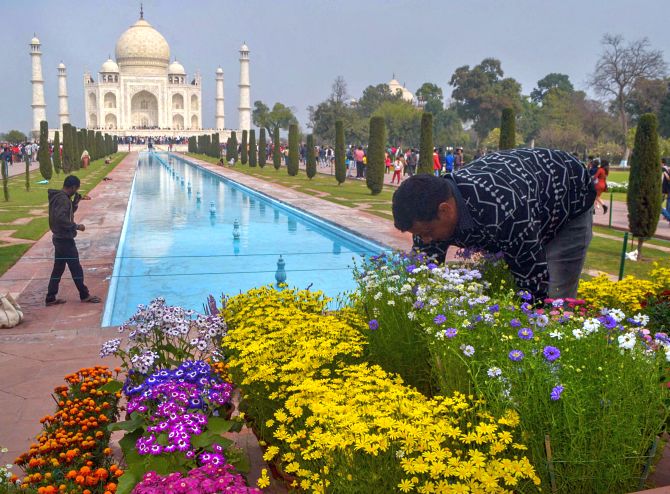 IMAGE: A worker arranges flower pots at the Taj Mahal ahead of US President Donald Trump’s maiden visit to India, in Agra. Photograph: PTI Photo

The billboards of ‘Panchhi Petha’ are competing fiercely with hundreds of sundry hoardings welcoming Donald Trump to Agra and the Taj Mahal.

But the most famous brand of the sweetmeat made from ash gourd won’t get to showcase its products to the United States president, a disappointed branch owner in Tajganj told Business Standard.

All shops inside the Taj complex will remain closed when Trump visits the monument of love with his wife Melania on Monday.

Despite the hit on business, Agra’s in good spirits.

From Dwight D Eisenhower to Bill Clinton, many American presidents have made sure they’re photographed against the backdrop of the Taj.

And, now the monument is ready to impress Trump for that family frame.

The messages flashing across Agra capture the spirit of readiness.

It’s another matter that Trump has been sending confusing signals on trade and business deals with India over the last few days.

Leaving nothing to chance as a good host would do, the Bharatiya Janata Party-ruled Uttar Pradesh has done its bit to beautify the area around the world’s most iconic monument of the Mughal era.

On Saturday, this reporter found everyone from gardeners to masons working at breakneck speed. 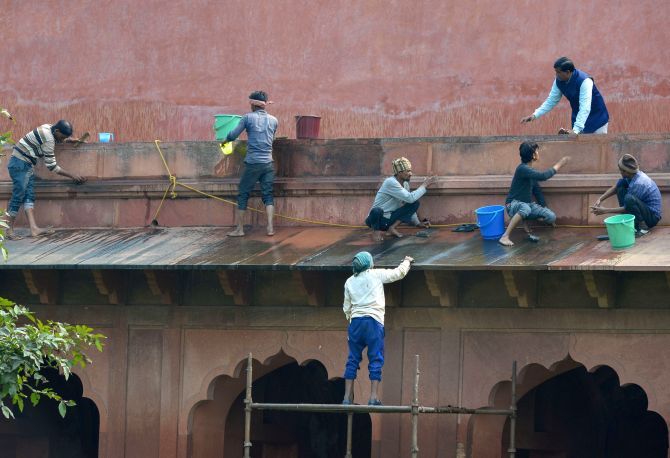 If gardeners were on ground designing grass in star pattern (a feature of Mughal architecture), masons were fixing broken tiles and leaking fountains.

Then there were others cleaning paan (betel leaf) stains.

After the US president and his wife land at Agra airport, the convoy would proceed straight to the Taj entry gate, from where the electric-run golf carts would escort them to the marble marvel, officials said.

His daughter and son-in-law are part of the delegation to India.

Close to 20 electric golf carts have been taken away by the UP Police and CISF to reserve them for VVIP use on Monday.

The cart drivers were even asked for a trial run before they were selected for the final drill.

However, with two dozen carts missing, tourists were in a tizzy as they were forced to pile up on each other in whatever cart or e-bus available two days ahead of the famous visit.

Entry of vehicles in the vicinity of the Taj Mahal is restricted, according to a Supreme Court judgment.

That had prompted the state government to run electric carts and buses to ply tourists from the parking area to the monument and back. 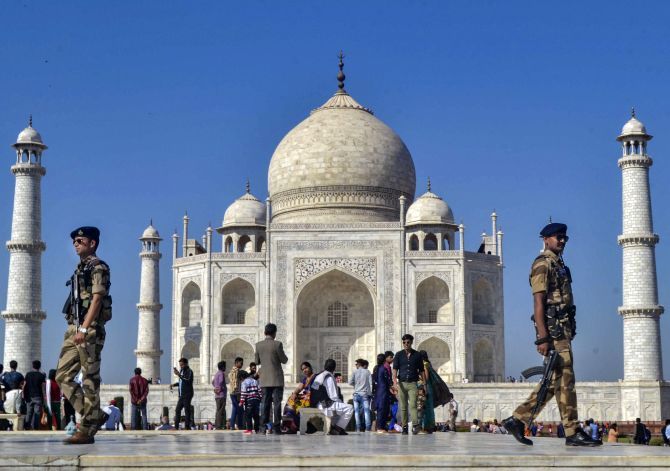 The activity is at another level inside the Taj Mahal as officials of the Archeological Survey of India are trying to keep pace with the changing plans of the US President.

“Earlier he was coming from the Oberoi Amarvilas Hotel. Now, we are being told he will come directly from the airport,’’ an ASI official pointed out while still not sure if that’s the final decision.

Although shops will remain shut, tourists will be able to visit Taj till 2 pm, after which the premises will be emptied out.

The official denied the reports that Taj would be shut the whole day.

Cagey about revealing too many details, officials remained tightlipped about the special arrangements.

"What if he doesn’t come? If his security says no, he won’t", a worker said, but he quickly added that a lot of pending work at the monument was concluded because of Trump’s visit.

The Taj Mahal looked whiter, the fountains cleaner and the Yamuna adjacent brimming with water.

But a peep into the narrow lanes close by shows a free zone of flies.

The stench of open drains takes you to a place where the garbage collected from the Yamuna was dumped.

That’s the cost of beautifying a part of the river visible from Taj Mahal, a local pointed out.

Fuller Yamuna and how 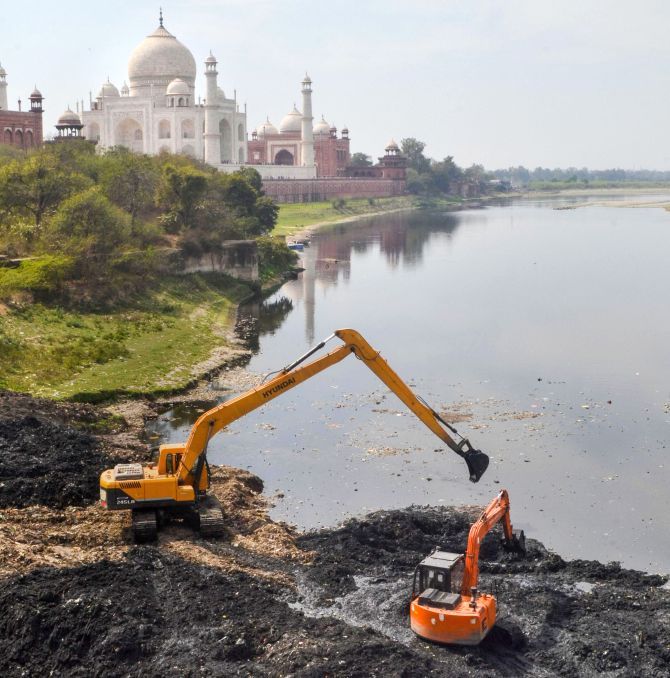 The UP government released 500 cusecs of water from the Upper Ganga Canal in Uttarakhand to replenish the depleting water level in the Yamuna that runs next to the Taj.

Dussehra Ghat, which overlooks the monument, is slowly seeing the water rise.

Hathi Ghat, the other end near the Agra Fort, is bereft of even a single stream of Yamuna.

“I don’t think there’s so much water that it will come till here. Rather, the construction work has stopped here and I will not be paid for a week,” said a daily wage labour who was working on a bridge being constructed near the Hathi Ghat.

In anticipation of water gushing through the area, all work has been stalled.

“How will the last-minute cleaning help the river? It should be done periodically, not just to show off. A river is dying and they are doing temporary face-lift,” said a pollution department official.

After Trump’s whistle-stop visit is over, one will know if the speed cleaning will continue for a real makeover.

As of now, that’s not a pressing matter for the administration as Agra gears up to receive Air Force One with its famous occupants. 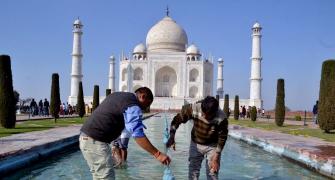 Modi unlikely to visit Taj Mahal with Trump: Sources
'Spectacle is why Trump is coming to India'
Trump sounds like a Badshah out to enjoy himself