ITC Maurya, the hotel where United States President Donald Trump will check-in on Monday, has been brought under an unprecedented security cover with anti-sabotage teams involving the Army and paramilitary conducting checks on the routes to be taken by the visiting dignitary. 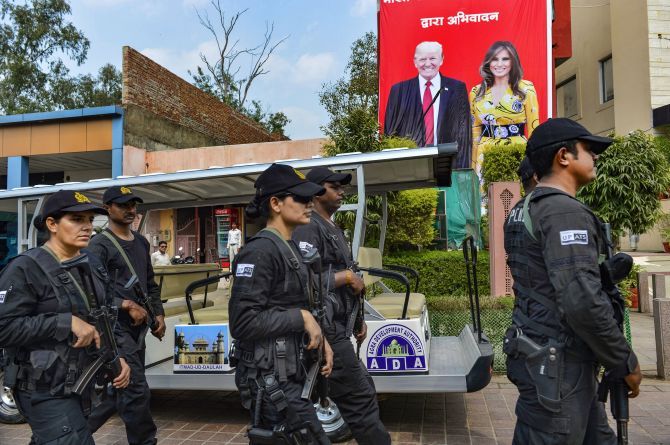 IMAGE: UP Anti-Terror Squad (ATS) commandos patrol a street near Taj Mahal ahead of US President Donald Trump’s maiden visit to India, in Agra, on Sunday. Photograph: Kamal Kishore/PTI Photo

Security agencies are also working in close coordination with the US Secret Service, officials said.

In Ahmedabad, over 10,000 policemen from different parts of Gujarat have been deployed at strategic locations as part of the elaborate security arrangements for Trump's visit on Monday, officials said.

The massive police deployment is in addition to officials of the United States Secret Service, and India's elite National Security Guards (NSG) and Special Protection Group who would also be guarding the US president's visit.

The Secret Service agents along with other US security personnel have already arrived in Ahmedabad with their equipment and vehicles in at least four cargo planes during the last one week.

Anti-drone detachment of NSG, snipers, elite SWAT commandos, kite catchers, canine units, sharp shooters on high-rise buildings and Parakram vans have also been deployed along the routes and areas in and around the hotel where Trump will be staying, they said.

Police personnel from six districts have been deployed for the security arrangements and nearly 40 companies of Central Armed Police Forces have been pressed into action.

Hundreds of high-definition CCTV cameras with night vision have been installed across the Sardar Patel Marg where hotel ITC Maurya is located to monitor the situation round-the-clock, the officials said.

Five years ago, when Trump's predecessor Barack Obama visited the national capital, the Delhi Police had rented 605 CCTV cameras and spent more than Rs one crore in hiring, installing and later removing them.

In view of the spiralling tensions between Iran and the US, there is a higher security threat this time and the agencies are more 'cautious and alert' than ever, the sources said.

A senior police officer said, "We have also requested the anti-sabotage checking teams from paramilitary and army. They have been regularly conducting anti-sabotage checks along every route to be taken by the US President during his visit here".

Besides the multi-layer security cover, elaborate arrangements have been made by the Delhi Police, including placement of double barricading on all the roads where Trump's convoy is likely to pass, officials said, adding that aerial surveillance of the route will also be conducted as part of the security measures.

Jersey barriers (modular concrete or plastic barriers placed to organise traffic into lanes) will also be put up on the route, a senior police official said.

The route leading to a Delhi government school where US first lady Melania Trump is scheduled to pay a visit will also be under a high security cover, according to officials.

Trees have been trimmed according to the directions of the security agencies as part of the protocol.

Meetings have also been held with US security agents on the elaborate security arrangements in place. 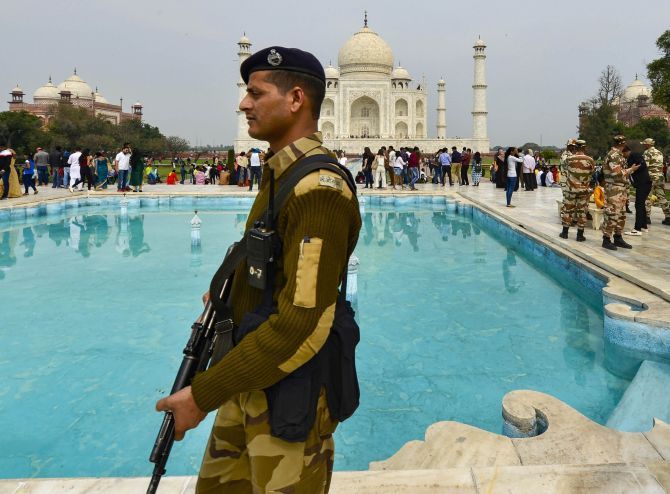 The second layer of security will be deployed around the hotel's lobby area, parking, lawn area and the pool area, while the third one will comprise police personnel from the district police.

Even at the neighbouring Taj Palace hotel, security personnel are maintaining a tight vigil.

The floor where the Grand Presidential Suite is located at the ITC Maurya is out of bounds for most hotel staff owing to the elaborate security arrangements.

Sources said security arrangements at the hotel have been underway for the last two weeks with NSG commandos and Delhi Police personnel surveying every floor on a daily basis. Officials from the US embassy are also monitoring the preparations with all details being kept under wraps.

The sources added that the hotel will be out of bounds for other guests during the time Trump and his entourage will be there, and all the 438 rooms of the five-star property have been booked.

Trump and Prime Minister Narendra Modi will take part in a 22-km roadshow from the Ahmedabad international airport and then proceed for the 'Namaste Trump' event at the newly-built Sardar Patel Stadium in the city's Motera area, where over one lakh people are expected to be present.

Police will be using the anti-drone technology to neutralise any suspicious drone on the route, officials said, adding that an anti-sniper team of the NSG will also be stationed along the roadshow route, starting from the airport till the Motera stadium via Indira bridge.

With the help of sophisticated hand-held devices, the entire route has been scanned several times by the Bomb Detection and Disposal Squad.

Police and other security agencies have also conducted a rehearsal on the entire roadshow route using over 100 vehicles, they said.

Along with police personnel, who will be led by 25 IPS officers, teams of the Rapid Action Force, State Reserve Police, Chetak Commando and Anti-Terrorist Squad are also deployed at strategic locations.

Before the US president's arrival, at least four C17 Globemaster cargo planes of the US Air Force have landed at the Ahmedabad international airport with security and communication equipment, Trumps' official helicopter 'Marine One' and a mammoth SUV-like vehicle.

The giant SUV, which would be part of Trump's cavalcade during his 22-km long roadshow on February 24, is known as WHCA Roadrunner. WHCA stands for White House Communications Agency.

The Roadrunner vehicle, also known as the MC2V (mobile command and control vehicle), serves as a mobile communication hub for the presidential motorcade by encrypting duplex radio and streaming video, which in-turn is beamed to a military satellite that sends the data back to the ground.