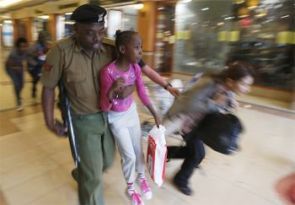 An alert security guard proved saviour for a Indian family at the terror-hit Westgate Shopping Mall in Nairobi by hiding them in a dark storeroom and guiding them to safety through an inner passage of the building.

Recalling his harrowing experience, Jyothish, who was with his family at the mall, told his parents and in-laws over phone from Nairobi on Tuesday that they would have been gunned down by the terrorists but for the quick thinking by the security man.

"I thank that unknown security guard who turned up at the right time time and asked us to kneel down on the floor," he said.

"But for the quick act of that unknown securityman we would have been gunned down..," he said.

Jyothish, Lija and their child had had gone to the shopping mall on Saturday to buy gifts for the child's friend. They were also accompanied by the wife of a family friend from Kannur in Kerala.

While they were selecting the gift, there was a sudden commotion and initially they thought that the mall had caught fire. Then, to their shock, they heard gun shots and screaming by people and many running helter-skelter.

Within moments, a securityman turned up where Jyothish and several customers were standing and he signalled them to remain silent before leading them to a dark storeroom nearby.

The guard told them that it was an attack by gunmen and asked all to lie on the floor without making noise and causing panic. He then locked the room from outside and went away.

From the closed room they heard gun shots and deafening sounds of grenade burst but everyone lay silent with bated breath. After over two hours, the guard came back, opened the door and guided them to safety through an inner passage of the building without being noticed by the attackers.

Jyothish lives in a house about 300 metres from the mall. He said they used to shop there quite often and their faces might be familiar to the guard.

Jyothish has been working in Nairobi as marketing manager of a private company.

"Immediately on seeing the flash on TV about the terrorist strike, I phoned Jyothish. But there was no response. It was after several hours that I, to my great relief, got him on phone. Even then, he could only say that everyone is safe. It was only the next day that he narrated the whole sequence of events," Unnithan told PTI.

Over 60 people have been killed in the attack on the mall in Kenya.

Image: A soldier carries a child to safety as armed police hunt gunmen who went on a shooting spree at Westgate shopping centre in Nairobi 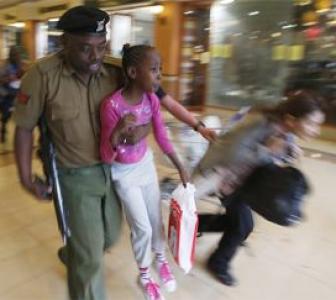 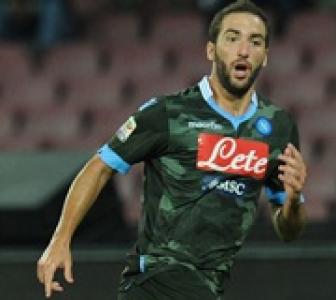 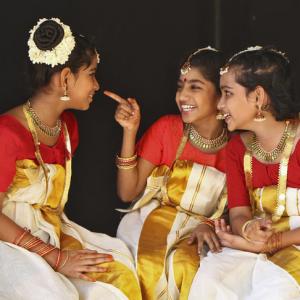 CHECK OUT: This is how Kerala celebrates Onam 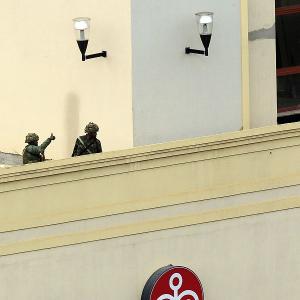