A Hyderabad court has permitted the doctors of Nizam's Institute of Medical Sciences to forcibly administer nutrition and intravenous fluids to Telugu Desam Party president N Chandrababu Naidu. The court's reply comes in response to a report filed by the Hyderabad police on the leader's deteriorating health.

On Tuesday evening, a high-power team of doctors warned that Naidu's condition could turn critical any time. Naidu's indefinite hunger strike in protest against the "inadequate" relief package announced by the Andhra government for farmers, who lost their crop in the recent rains, entered day five on Tuesday. But he rejected the plea by a team of ministers to end his fast.

Dr Sheshgiri Rao, head, department of cardiology, NIMS, revealed that Naidu was suffering from hypertrophic cardiomyopathy, a disease of the heart muscle, since his birth and if there was any change in electrolytes in his blood it can make his heart beat irregular.

Experts say that hypertrophic cardiomyopathy can lead to major complications and even cardiac arrests in some cases.

Principal Health Secretary and director in charge of the institute P V Ramesh said Naidu's pulse rate, blood pressure and sugar levels were normal. "He is weak and his condition is stable but it can turn critical," he said adding that the team of doctors was doing every thing possible to take care of his health.

Nephrologists Dakhshina Murthy said that Naidu's kidneys were functioning normally. Doctors said that Naidu was able to withstand five days of starvation because he followed a healthy lifestyle.

In the latest attempt to persuade Naidu to give up the fast a team of three ministers sent by AP Chief Minister N Kiran Kumar Reddy -- Sabita Indra Reddy, DL Ravindra Reddy and P Satyanarayana -- visited him in the hospital and requested him to start taking fluids. The ministers told him that government will discuss the issue of package for farmers after he ends his fast. But Naidu refused insisting that the government should come out with a package first and then only he will break his fast.

State CPI Secretary K Narayana separately met the Andhra CM to broker a deal. He suggested that Kiran Kumar Reddy should offer to take an all-party delegation to meet Prime Minister Dr Manmohan Singh and seek assistance for the farmers. But, the CM said that the government had announced a relief package for the farmers and there was no need for meeting the PM. 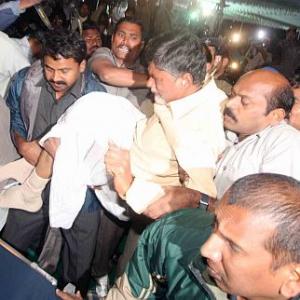