Naidu: Sacrilege of House is democratic but action is not?

Amid continued disruption in the Rajya Sabha over the suspension of 12 MPs, Chairman M Venkaiah Naidu on Thursday said "disapproval of undemocratic conduct in the House cannot be decried as undemocratic", and urged the ruling and opposition benches to resolve the impasse. 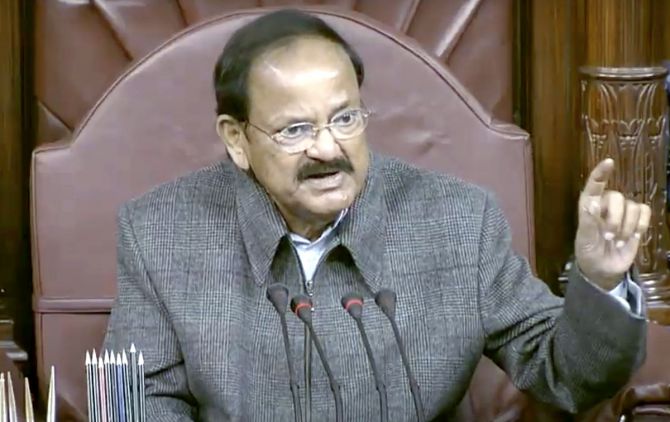 Twelve opposition MPs were suspended from the Rajya Sabha on Monday for the Winter Session of Parliament for their "unruly" conduct in the previous session. The Opposition has described the suspension as "undemocratic and in violation of all the Rules of Procedure" of the Upper House.

The House proceedings have been disrupted since then.

On Thursday, which was the fourth sitting of the Winter Session, the Rajya Sabha was adjourned for about 50 minutes soon after listed papers were tabled in the morning.

"The House could not transact any business during the last three days," Naidu rued.

He said some of the leaders and Rajya Sabha members "in their wisdom, chose to describe the suspension of 12 members as undemocratic". "I have struggled to understand if there was any justification in that kind of a narrative being propagated but could not."

The Rajya Sabha chairman said this was not the first time that such a suspension has happened. Starting in 1962 till 2010, members were suspended on 11 occasions in furtherance to motions moved by the governments of the day.

"Were all of them undemocratic? If so, why was it resorted to so many times?" Naidu asked.

While terming the suspension "undemocratic", both within and outside the House, "not even a word is being said about the reasons given for the suspension, the disdainful conduct of some members during the last session, which I have categorically called as 'acts of sacrilege' on the last day of the last session", he said.

As opposition members, including from Congress, kept protesting, Naidu said the Rules of Procedure and Conduct of Business in the Council of States (Rajya Sabha) clearly provide for the suspension of members for disrupting the proceedings of the House and for misconduct lowering its dignity, under Rules 255 and 256.

The suspended MPs include six from the Congress, two each from the Trinamool Congress and Shiv Sena, and one each from the CPI and CPI (M). This is the first time that 12 MPs have been suspended in one go in the Rajya Sabha for the remainder of the session for unruly behaviour.

The reasons for the latest suspensions were in the public domain and Minister of Parliamentary Affairs Pralhad Joshi gave the reasons while moving the Motion for suspension on the first day of this session, he said.

"Unfortunately, a message is sought to be sent out that 'sacrilege' of the House is democratic but action against such sacrilege is undemocratic. I am sure people of the country would not buy these new norms of democracy," Naidu said.

He stressed there were suspensions in the past and some of them were revoked prematurely because the errant members regretted their acts of misconduct in the House.

"I am deeply pained to know from media reports of categorical refusals to express any regret for the acts of misconduct during the last session that led to this round of suspensions. Then what is the way forward?

"You don't want to regret your misconduct but insist on revoking the decision of this House taken as per due procedure laid under the Rules of the House. Does this amount to upholding the principles of democracy?" Naidu said.

He further said Deputy Chairman Harivansh has urged both sides to talk it out and do the needful to move forward to enable normal functioning of the House.

"It is human to err and it is also human to make amendments. One cannot refuse to amend and insist on glossing over the wrongdoings.

"Suspensions, either in the past or now, are only the expression of disapproval of the acts of misconduct of some members by the House. Disapproval of undemocratic conduct in the House can't be decried as undemocratic, for sure," he added.

Naidu urged both the treasury and opposition benches to resolve the impasse.

"I urge both the sides of this august House please talk it out and then find a way to do the mandated job of this house. This is my appeal to the entire House," he said.

Naidu also said the people of India gave themselves the Constitution of India that stipulated democracy as the instrument of nation-building as were the dreams of freedom fighters and the vision of the makers of the sacred Constitution.

The Constitution casts a huge responsibility on the legislatures and elected representatives of the people, he added.

The protest by opposition parties continued in the Rajya Sabha with Congress MPs insisting that Leader of Opposition Mallikarjun Kharge be allowed to speak. Naidu did not agree, saying Kharge has already spoken on the matter.

Some Congress MPs trooped in the Well of the House.

TRS members were also seen carrying placards demanding Rs 25 lakh compensation for farmers who died during the protest against the three farm laws, which have now been repealed. They also demanded a law to guarantee minimum support price for crops.